For a country in which an estimated every 2 of 5 people work in agriculture, which is a significant contributor to the country’s GDP, agro-processing is an industry that hold tremendous value which has yet to achieve its full potential. One of the reasons behind this is that the majority of raw materials required for production can be sourced locally such as grains, vegetables, and meat. According to sector insiders, post harvesting losses of annually stand at $2.38 bn per year (Tk 30,000 crores) [1], a loss that can be salvaged through agro-processing. 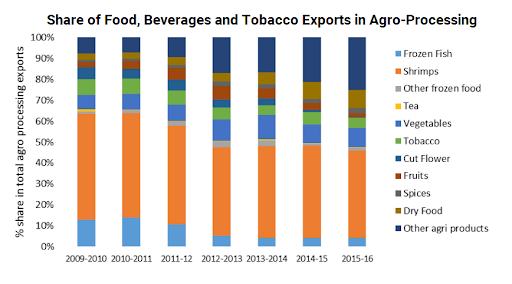 Agro-processing can be divided into two stages, primary processing and secondary processing, with the former dealing in processing of agricultural products in their basic form and the latter involving the conversion to final forms such as juice, jams, concentrates etc. The industry covers domains including crops, poultry, livestock, fisheries, and forestry. 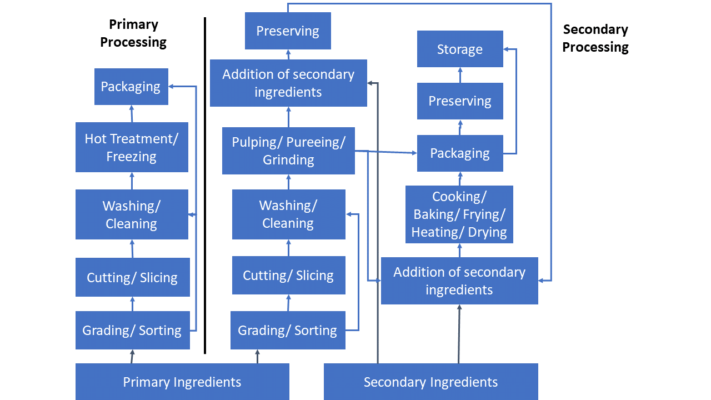 Export earnings from agro-processed food grew 97.31% to $291.82 mn during July-September, up from $147.90 mn last year, with majority of growth from dry foods, tea, fruit juice, biscuits, and rice. Due to limited road infrastructure and electricity supply, the majority of processors are situated in the North region of the country to avoid high costs of logistics and energy, as the majority of raw materials are procured from nearby. There is a lack of trust between farmers and processors, as procurement is usually seasonal and opportunistic i.e. when there is surplus production and a large price drop. As a result weak supply chain relationships, farmers face considerable discouragement in undertaking large-scale cultivation, thus making procurement limited to availability of goods in the market. Furthering complexity of the industry is added with various middle men and agents who act to ‘facilitate procurement’ due to the absence of weak supply chain relationships between producers and processors, significantly increasing the prices of raw materials and wastage during transportation.

There are currently 479 members in Bangladesh Agro-Processing Association (BAPA) of which 241 are exporters and 235 manufacturers of agro-processing products. Collectively, members of the association export around $500 mn annually to 144 countries [3]. Besides local manufacturers, large companies such as Pran, Akij, Square, Ahmed, ACI, BD Foods, and Bombay Sweets are also operating in the industry. Foreign players have also shown considerable interests in entering the market through FDIs. 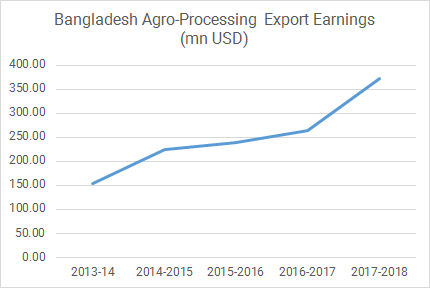 The government has also taken initiatives such as tax holidays and cash incentives to boost production capacity of agro-processors. Donor-funded projects have also been undertaken to enhance capacity, standards, skills, and networks to strengthen the industry.

Major challenges in the sector is include a lack of policy support to reduce the costs of doing business for SMEs  to encourage growth in rural areas where obtaining financing and ensuring quality production is crucial for growth. In essence, this means taking initiatives towards product development. Due to past cases of food adulteration there has also been a loss of confidence in certain products, making it difficult to penetrate into new markets. At the same time, a lack of lab facilities to ensure quality goods means an inability to provide a greater diversity of offerings. If the issues of policy and lab facilities, and building a positive image is tackled, stakeholders estimate that Bangladesh will be able to reach $1 bn in exports by 2021 [5].

At the micro level, agro-processing businesses must take steps to ensure a healthy supply chain, cutting out middlemen to reduce backward linkages and ensure farmers are not marginalized and encouraged to undertake large scale cultivation to reduce costs of procurement.