An Overview of Agriculture in Bangladesh

For most, agriculture is a means of food security, but it is a livelihood for a vast population in Bangladesh and a means of reducing poverty (accounting for 90% of reduction in poverty between 2005 and 2010 [2]) and fostering sustainable economic development. It is a sector that is strategically favorable to Bangladesh given its location as the largest delta in Asia, and most populated delta in the world [3]. 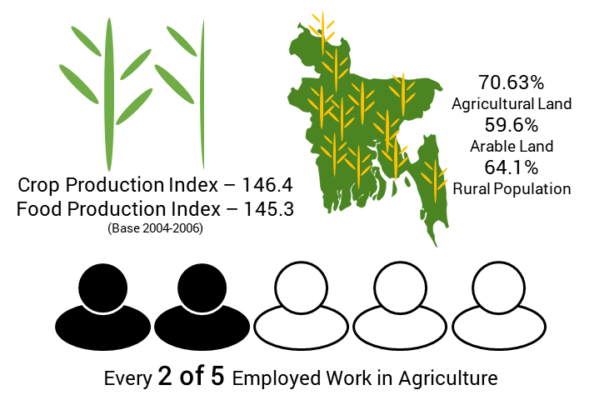 In 2016, 70.63% and 59.6% of the total land was agricultural and arable respectively [1], indicating that around 10% of the land was unsuitable for growing crops. Before the inception of the country, agriculture has been a critical sector to overall productivity, accounting for more than 50% of GDP during 1960-1979 [1]. In 1991, the sector employed 69.61% of the employed which has whittled down today to 39.07% in 2017 [1], i.e. every 2 of 5 employed work in agriculture. Bangladesh has come forward a long way from the past, with the RMG sector taking over as a major contributor to GDP. However, agriculture continues to play a critical role in the country and the world, with the promotion of sustainable agriculture stated in SDG 2 (No Hunger) [3]. 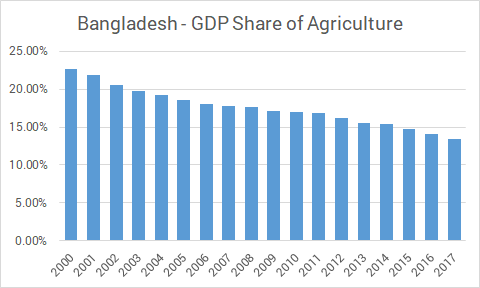 The agriculture sector can be broken down into four main components: crops, livestock, fisheries, and forests. Of these, crops make up 55% of the sector with aus/amon/boro rice paddies, jute, potato, and wheat as major crops [3]. The country is the second largest producer of jute (after India) and the world’s largest exporter of the fiber. The sector currently contributes 15% to GDP and employs 43% of the population [6]. 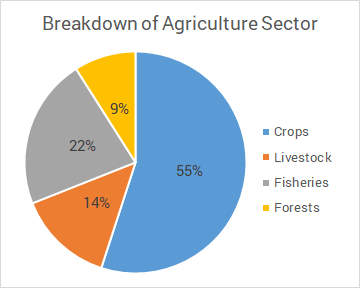 Rice is the staple food of Bangladesh and makes up 48% of rural employment and half of agriculture’s contribution to GDP [6]. It is highly labor intensive and fields are traditionally flooded to provide ample water. The crop has seen steady growth since 1971 with average yield rates increasing from 1.096 MT/hectare to 3.041 MT/hectare in 2015 (a steady annual growth rate of 1.31%).

Jute is a natural fiber and cash crop for over 3 million small farm households in Bangladesh [6]. It is the 2nd most important vegetable fiber in the world, only second to cotton. Global production is estimated to be at 3.3 mn MT/year with Bangladesh estimated to have produced 1.349 mn MT in 2017 7. The crop is responsible for 1/3rd of manufacturing output and is the largest export commodity [6]. The fiber is completely biodegradable and has recently seen increased demands due to a global shift towards reducing the use of fossil fuels and derivative products (e.g. plastic bags).

In terms of the volume of fresh produce, potatoes are the world’s most important food crops. Nearly 90% of the total yield comes from Europe, and in Bangladesh, the amount of harvest has been on the rise due to the introduction of higher yielding varieties. Although the conditions for growing the crop are ideal, many avoid doing so due to a lack of market demand for the product. A negligible amount of total production is exported and a substantial amount of seed potatoes are imported every year used to meet local demand.

Bangladesh is one of the leading fish producing countries in the world, producing 4.134 mn MT in FY17 (a surplus against demand) contributing to a daily consumption averaging 62.6g fish/person (around 60% of animal protein intake) [10]. The industry made up 3.61% contribution to GDP in FY 17 10. It has also seen an average growth of 5.42% over the last decade to achieve the government’s production target of 4.55 mn MT by 2020-21 [10]. The industry currently employs around 11% of the total population on a full-time and part-time basis 10. The country exported around 68.31 thousand MT of fish to more than 50 countries in 2017, increasing 5 times in size over the last three decades [10].

There are three types of fisheries in Bangladesh; inland capture, inland culture, and marine capture. In terms of fish, massive expansion has been seen in inland aquaculture of indigenous and exotic carp species and tilapia, pangas, and koi. Indigenous species like koi, singh, magur, pabda, gulsha, mola etc. may have high prospects in the future due to their high demand in the market and greater nutritional value.

In Bangladesh, the majority of livestock consists of cattle, buffalos, sheep, goats (collectively ruminants), chickens, and ducks. Over the last decade, the number of ruminants has remained relatively stable with a majority of growth seen in poultry. 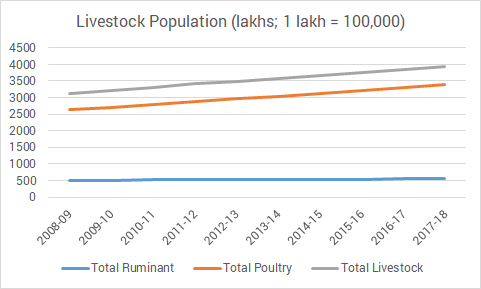 Climate change is one of the biggest long-term threats due to the effects of floods, saline intrusion, and droughts that it introduces into a country that is situated at sea level [2]. In a  country where agriculture continues to make a significant contribution far beyond GDP, it is an issue that must be addressed through preventive measures such as revival of toxic waters, reforestation, and the creation of a sustainable ecosystem complementing farming initiatives, such as those seen in Africa’s agroecological efforts to find low-cost methods to increase crop yield.

Bangladesh’s topography is very rich in biodiversity, which has been balanced for a long time. However, due to deforestation and the effects of climate change, there has been a negative impact on the country’s natural landscape. This includes toxic waters from industrial waste and other uneventful events (e.g. oil spill in Sundarbans, the largest mangrove forest in the world). Together these have contributed to diminishing diversity in the ecosystem, weakening its natural balance and ability to protect the country from natural disasters.

Increasing usage of chemical fertilizers, pesticides, and dumping of industrial waste also acts to weaken the sustainability of agriculture as runoff from fields seep into rivers, transporting contaminated waters throughout the country.

Collectively, these issues threaten the long-term sustainability of agriculture, which can have irreversible and highly detrimental effects on the health of the general population as well.

Agriculture has seen steady growth over the years, mainly due to a shift from harvesting through natural means to intensive farming and husbandry. However, greater growth may be possible if measures are taken to address the common issues of the sector. This includes finding cost-effective ways of revitalizing the ecosystem in the long-term while changing policy to prevent the dumping of toxic wastes and reducing the amount of harmful fertilizers and pesticides used in growing crops. Although climate change is not possible for the country to tackle alone, efforts of reforestation can significantly alleviate its effects on the country while protecting it from damage caused by floods.

Currently, a number of NGOs are making a significant amount of investments into the sector as it has been proven to have the potential to reduce poverty in a sustainable manner. The recent introduction of mechanized tools to increase productivity has greatly reduced the costs of doing business in a field that was once highly dependent on labor.

If the country can further enhance the availability of tools, education, and promote low-cost and cost-effective ways of enhancing yields in the long run, the sector may have the potential to move far beyond being just sustainable to achieving greater growth. Care must also be taken to ensure biosecurity in the livestock sector which has in the past decades seen almost zero growth in ruminants and a sharp decline due to the bird flu in 2007, which the industry still has not recovered from. Incentives to formalize these industries, reduce forward linkages, and relieve duty on essential imports are crucial for growth.