Starting from a school strike, a seventeen-year-old Swedish girl, Greta Thunberg became an iconic figure for climate activists all over the world. By raising her voice loud about the seriousness of the climate crisis, she led a global movement calling for change and demanding immediate actions from world-leaders. Climate change primarily refers to significant changes in global temperature, precipitation, wind patterns and other measures of climate that occur over several decades or longer.

Carbon emissions from fossil fuels and industrial processes are influencing climate change the most. The developed countries, more specifically the industry leaders such as China, the US, Russia are the largest contributors to climate change. China and the US, these two countries alone are responsible for more than 40% of the world’s CO2 emissions.[1] Unfortunately, this leaves the developing and LDCs to face the dire consequences. LDCs such as Puerto Rico, Haiti, Bangladesh, Vietnam that make the least contribution to climate issues, are the most affected ones.[2]

As natural disasters result in a $520 billion loss in annual consumption globally, climate change has a significant impact on the global economy.[3] The developed countries namely the UK, Norway, China have shown their concern to tackle climate change by taking mitigation steps. Whereas, disaster-prone countries and LDCs have to concentrate mainly on building resilience to climate change rather than taking mitigation steps as they are more vulnerable to climate issues and they contribute relatively less to the global climate crisis. Bangladesh falls under this categorization as it was ranked 9th among the countries most affected by extreme weather events in 1998-2017 according to the Global Climate Risk Index, 2017.[2]

The Impact of Disasters on the Economy

By experiencing 219 natural disasters between 1980 and 2008, Bangladesh comes with a long history of natural disasters. Over the past 40 years, the economic losses caused by disasters were at an estimated $12 billion, depressing GDP annually by 0.5 to 1%.[4]  Floods and tropical cyclones caused the majority of the damage, for example, cyclone Sidr caused an estimated $1.7 billion in damages or about 2.6% of GDP in 2007. In May 2009, cyclone Aila caused an estimated $270 million in asset damage.[4] The figure below shows the economic loss caused by tropical cyclones in the last few decades. 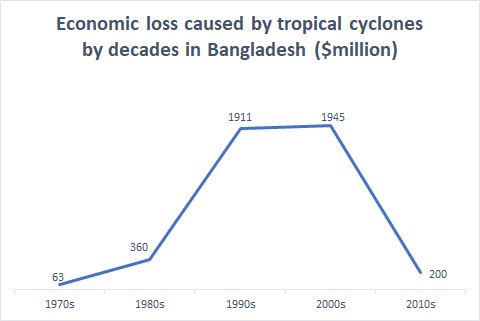 Despite facing a heavy toll from the frequently occurring disasters, Bangladesh’s adaptation and strong disaster-coping mechanisms are minimizing the loss in comparison to past natural disasters. For example, 1970 Cyclone Bhola killed half a million people while a similarly strong 2019 Cyclone Fani caused less than 10.[7]

The Government currently allocates 6 to 7% of its annual budget – around $1 billion on climate change adaptation, with 25 percent of this coming from international donors.[5] Bangladesh Climate Change Strategy and Action Plan (BCCSAP) of 2009 works in six thematic areas to tackle climate change. The figure below shows the breakdown of the climate budget against the six areas for 2018. The largest chunk of the budget is used for basic services, food, health and infrastructure. However, the disaster management area requires more investment because of the high frequency of disasters in Bangladesh. 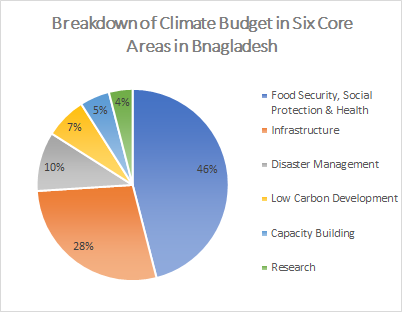 FIGURE: Breakdown of Climate Budget / Source: Ministry of Finance, Government of the People’s Republic of Bangladesh

The Trajectory of Greenhouse Gas Emission in Bangladesh

Since Bangladesh emits a relatively low amount of greenhouse gases than the developed countries, it does not have any pressing international obligation for climate change mitigation. Agriculture is the leading contributor, with 39% of total greenhouse gas emissions. The energy sector is the second-highest emitter with 33%, followed by land-use change and forestry, waste and industrial processes representing the third, fourth and fifth highest emitters, accounting for 17%, 10% and 2%, respectively.[11]

The energy sector contributes highly to carbon emission with 33% of total emissions which can be reduced by using renewable energy. According to Renewable Energy Policy 2008, the government is aiming to achieve 10% power generation from renewable sources by 2020. But Bangladesh is currently generating only 2.95% of total power generation from renewables which puts the country in a challenging situation to reach the target. 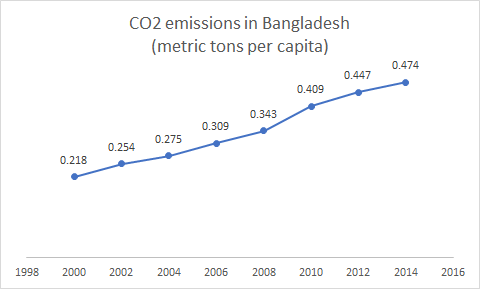 The increasing trend in carbon emissions is a matter of concern and Bangladesh Government has formalized an unconditional commitment to reduce greenhouse gas emissions by 5% from ‘Business as Usual’ levels by 2030 in the power, transport and industry sectors while submitting ‘Intended Nationally Determined Contributions’ (INDC) to the United Nations Framework Convention on Climate Change (UNFCC) in 2015.[12] It also included a commitment to increase its contribution to a 15% reduction, dependent on international support.

The economic sectors that are particularly at risk due to disasters include agriculture, water and sanitation, infrastructure, and health.[6] The International Panel on Climate Change (IPCC) predicted that rising sea levels and coastal erosion can cause Bangladesh to lose 17% of its land and 30% of its food production.[5]

In that case, agriculture would be severely affected and internal migration would increase causing a greater regional disparity. With more people moving to Dhaka, the living cost would be getting higher which might lead to inflation. Moreover, Dhaka is facing serious air pollution as the average AQI (Air Quality Index) value remains between 201-300 which is extremely unhealthy for city dwellers. If this continues, Bangladesh will face serious healthcare challenges in the near future. 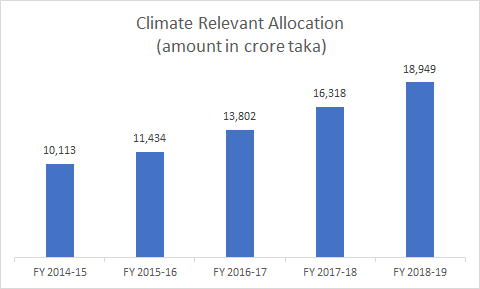 Climate funds are primarily used for building adaptation along with a limited investment in mitigation. The major international sources of climate finance are Global Environment Facility (GEF),  Least Developed Countries Fund (LDCF), Adaptation for Smallholder Agriculture Program (ASAP), Global Climate Change Alliance (GCCA), Climate Investment Funds, UN-REDD Readiness Program, and recently established Green Climate Fund (GCF).[5] Bangladesh was among the first eight countries to be funded by the GCF which is a fund set up under the UNFCCC to channel $100 billion a year from developed countries to developing countries to help tackle climate change.[5]

According to World Bank, Bangladesh will need $5.7 billion as adaptation finance by 2050 to tackle climate change. But currently, the country spends $1 billion a year, nearly a fifth of the estimated need which indicates a significant funding gap.[5]

Looking to the Future

The bright side is, Bangladesh is internationally recognized for its cutting-edge efforts to tackle climate change. Sheikh Hasina, the Prime Minister of Bangladesh was announced as one of the winners of the United Nations Champions of the Earth award in recognition of her country’s initiatives to address climate change. The award cited the progressive Bangladesh Climate Change Strategy and Action Plan (BCCSAP) for its effectiveness. Bangladesh is also the first country to set up its own Climate Change Trust Fund (CCTF), supported by nearly $300 million of domestic resources from 2009-2012.[14]

‘Women’s Action Towards Climate Resilience in South Asia’, a project led by an Indian NGO Mahila Housing Sewa Trust (MHT), was announced one of the winners of the 2019 UN Global Climate Action Award. This project’s mission is to organize and empower low-income households’ women to increase their resilience to the impacts of climate change. So far, MHT’s initiatives have helped 25,000 low-income families across seven cities in India, Bangladesh and Nepal.[15]

Even though Industry Policy 2016 covers some areas regarding environmental compliances for industries, most of the industries in Bangladesh have been playing an inactive role in addressing climate concerns except the garments industry.[9] Being a standout, the garments industry has expressed its commitment to tackling climate issues through the implementation of green infrastructure.

The RMG industry of Bangladesh, the leading export industry with 83% contribution to the economy, has recently joined the Fashion Industry Charter, a UN initiative for Climate Action that includes a target of 30% GHG emission reductions by 2030. Surprisingly enough, Bangladesh is also leading the green garment industry with the highest number of green garment factories in the world. There are 91 LEED-certified factories in Bangladesh, including the 24 platinum-rated buildings. The LEED (Leadership in Energy and Environmental Design) certification, awarded by USGBC, is considered to be the global standard of compliance and safety.[13]

The RMG industry realized the urgency of going green to regain international trust after the Rana Plaza incident. Other industries are relatively less motivated for adopting green technology due to lack of such incentive, the high implementation cost and the absence of responsible consumption behavior in Bangladeshi buyers.

Despite making significant progress by the Government of Bangladesh, without changes in current global behavior, Bangladesh would see annual economic costs equivalent to 2% of its GDP by 2050, increasing to 9.4% by 2100 as climate change will intensify the threat of natural disasters.[16]

To improve the condition of coastal areas and disaster response systems, reduce pollution in Dhaka and avoid the possible inflation and healthcare challenges, Bangladesh is in need of larger funds to allocate resources. To fill the international funding gap, institutional capability needs to be increased as most of these funds implement high-standard fiduciary structures and social protections. It is important to come up with good monitoring mechanisms, transparency and track records to ensure that the funds are being used for the purpose it is meant for.

The Government of Bangladesh should incentivize the industries on going green by introducing green industry policies and establishing monitoring cells to regulate and evaluate the implementation of the policies by the industries. The government has announced its plans to establish a total of 100 Special Economic Zones by the year 2025 which will help the country reduce existing regional disparity. Many of these zones are located near rivers and thus are threatened by the ongoing climate crisis. With adequate funding, an environmental panel should be formed to help build environmental infrastructure in the right economic zones. It will establish the basis of industries as environment-friendly in the economic zones from the very beginning.  Legislations and regulations should be enacted in order to set environmental bounds for industries but most importantly focus should be on the proper implementation as Bangladesh has faced trouble with such efforts.