In 2012 and 2014, boundary disputes with Myanmar and India were resolved leading to Bangladesh possessing 121,110 sq km of the Bay of Bengal[4], increasing the maritime boundary by 15-20%, a size equal to more than 80% of the country[4]. This includes 200 nautical miles of exclusive economic zones and over 354 nautical miles of resources on the sea bed[2]. The Bay of Bengal currently hosts around 8 mn MT of fish of which Bangladesh harvests 0.7 mn MT annually[2]. The sea is also the main route through which the country receives it’s bulk of exports every year.

Although the government has recognized the role of blue spaces as a key source of future growth, a lack of policy developments prevents the country from finding its path to digging up the riches under the deep blue sea. And for Bangladesh to create a blue economy of its own, it must also ensure that there is no reduction in aggregate natural capital and conservation of areas that help reduce poverty[4].

It’s estimated that there are over 500 varieties of fish and other marine life such as snails, shellfish, crabs, octopuses etc. Besides life, there is also considerable speculation on the presence of oil fields which could potentially provide an additional $1.2 bn worth of resources to the country[2]. According to experts, there are also 13 heavy mineral-rich silts in adjacent sea areas which are more valuable than gold and have the potential to contribute revenue in the billions. The country also has over 75 islands that could be used for tourism. But despite the billions sitting out in the open for the taking, a lack of oversight and policies make it difficult for creating an impact in this economy through greater investments. 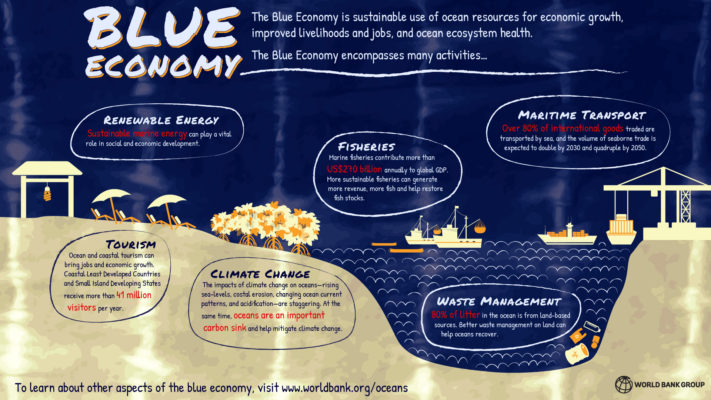 SOURCE: What is the Blue Economy? / World Bank

‘The ocean contributes more than $6 bn annually to the Bangladesh economy and has the potential to generate more income’[1], with a large portion of the opportunity in developing the blue economy lying in post-harvest processing. Besides this though, there is ample potential in fisheries, mineral resources, shipping, and energy industries. At the moment, boats and trawlers are only able to reach as far as 70 km of the 660 km distance freely available for fishing, leaving more than 80% of total waters unexplored. Fish beyond 100 m depth are also not being harvested. Despite near neighbors like India, Indonesia, Malaysia, and Thailand’s involvement in marine aquaculture, the practice in Bangladesh is almost nonexistent.

Breaking Down the Blues

In Bangladesh the ocean economy consists of broad economic sectors[4]:

It’s estimated that the livelihood of around 1.3 million people is tied to the blue economy with around 6 million employed in sea salt production and ship breaking[4]. Reports cite that as much as 30 million people, however, are dependent on the country’s ocean economy (18.2% of the population)[4]. Growth in the blue space is expected to grow in key areas such as gas and oil reserves, shipbuilding, and tourism. New industries are also emerging in the collection of sectors.

And 3 human drivers of change to Bangladesh’s ocean ecosystems[4]:

At the moment, policies to promote sustainable growth and construction near coastal zones are lacking, encouraging contractors on cutting quality and producing corrosion prone projects in order to save costs in the short term[3]. If developments and investments to boost this economy occur without set standards and policies, they may lead to short-term gains at the cost of long-run sustainability, and result in huge losses opposed to prospective gains. To ensure sustainable development, policies including social, environmental, and economic impacts must be taken into consideration.

How the country develops changes in policy will determine whether Bangladesh will be able to create a sustainable future for its marine economy. To develop policy ensuring high growth and sustainability, a report by the World Bank suggests a coordinated policy planning to guide a strategic and long-term transition for the future[4]. This includes creating policy fixated towards a common goal, as opposed to developing policies on a sector-to-sector basis. Case studies from neighboring countries can also help fast-track policy developments. The World Bank gives two recommendations in its report for sustainable growth of the blue economy in Bangladesh, building systems to gather data and measure the performance of the ocean economy, and creating policy scenarios for development and setting targets for the transition to a blue economy.