There are now more than five million Battery Electric Vehicles (BEVs) on the roads worldwide.Two million have been sold globally in 2018 alone, whereas the number of BEVs sold stood at just a few thousands in 2010.[1] By definition, EV refers to an electrically-driven vehicle which uses one or more electric motors for its propulsion. It uses chemical energy stored in efficient and environment-friendly rechargeable lithium ion battery packs instead of fossil fuel to propel it. This advancement in transport technology has been helping to fix transport problems, bringing new possibilities and choices in many countries.

Due to pollutants and traffic jams, authorities around the world are increasingly promoting the use of environment-friendly engines. Globally, transport emissions from traditional Internal Combustion Engines (ICE) accounted for over 24% of global CO2 emissions in 2016.[2] The BEV is a better alternative than ICEs in addressing localized pollution, national energy security and energy efficiency. In addition, it has a zero tail-pipe emission and thus emits less carbon dioxide compared to those powered by ICEs. 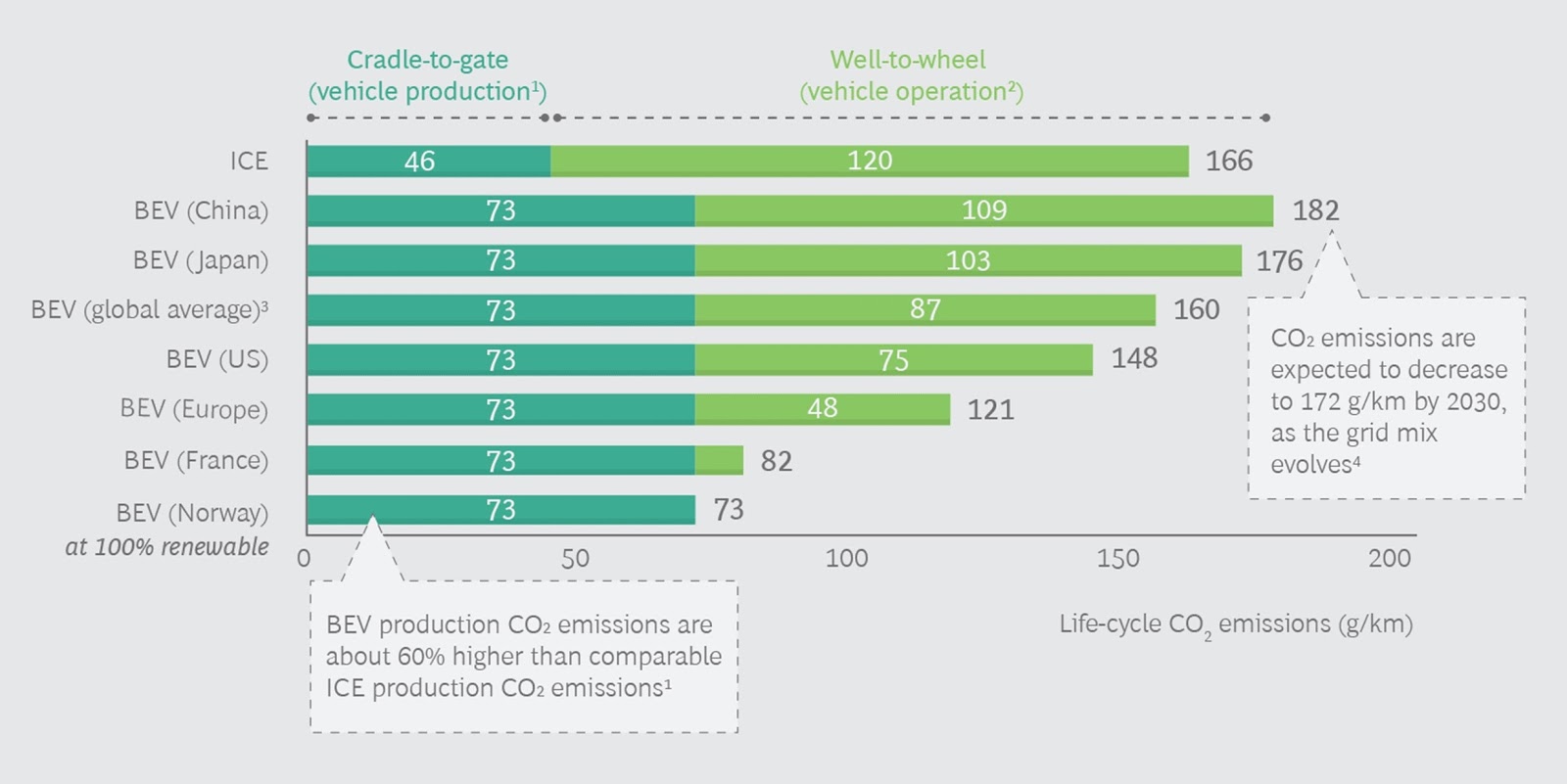 Figure: BEVs as a cleaner option over a vehicle’s lifetime / Source: BCG analysis 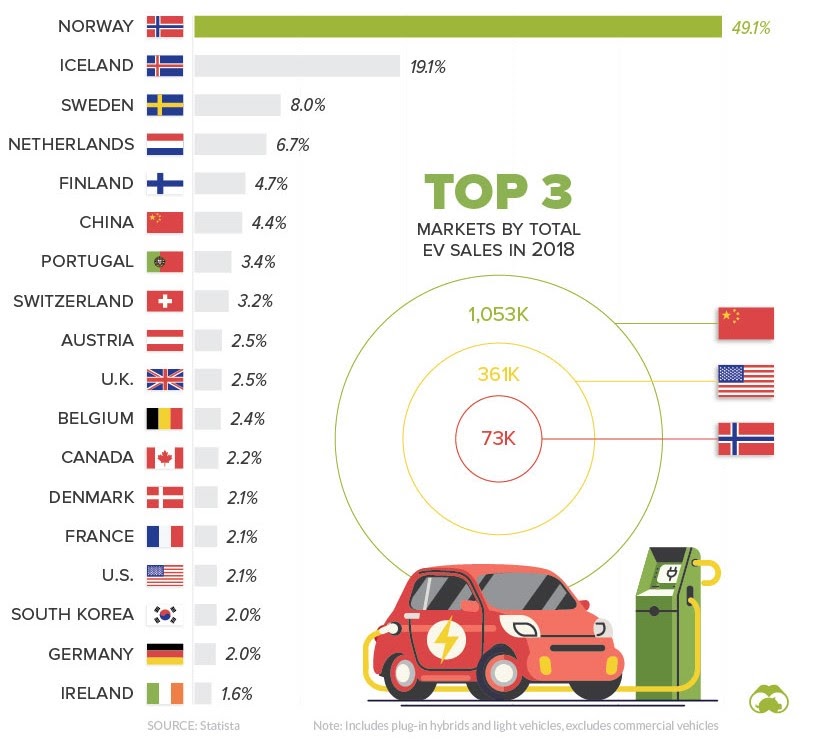 Figure: EVs as a percentage of total vehicle sales, by country / Source: The Visual Capitalist and Statista

Historically governments worldwide have supported diffusion of technologies in different sectors linking suppliers and users. Globally, the electric car’s share in the total automobile industry is on the rise. At the end of 2018, it stood at 4.6 percent, almost double from what it was in 2017, according to the Centre of Automotive Management (CAM). China is currently the leader in the global EV market followed by the USA, Norway, Japan and the UK. These cars are expected to seize a third of the market by 2025 and 51% by 2030.[3] Several factors driving the demand for BEVs in these markets include: government incentives lowering the total cost of ownership, tighter regulations on tailpipe emissions and falling prices of batteries that allow increasingly extended driving ranges.

Electric Vehicles in the Asia-Pacific

The Asia-Pacific electric car market is dominated by China followed by Japan, South Korea and India. Some major players in these markets include BYD Motors, Nissan Motor Corporation, Energica Motor Company S.P.A., Tesla, Daimler Ag and Ford Motor Company.[8] The key drivers for the Asia-Pacific market are rising environmental awareness, rising income level, growing urbanization and increasing government support. Countries like China and India plan to replace all cars with electric ones and are offering a  considerable subsidy on electric cars depending on the battery size. The electric car market growth in Asia-Pacific as a region is expected to be faster than North America and Europe as companies would not have to wait for the conventional cars to be replaced by the electric ones. Due to current low penetration of cars in Asia-Pacific, many first-time owners of a car might opt for an electric car.

Diffusion of EVs in Bangladesh

The dense population and growing number of floating populations have resulted in the increase of commercial activities including secondary and tertiary industries in Bangladesh. This has led to a growing demand for transport. However, the growth rates of buses on the streets have remained stagnant. Under these circumstances, para-transports (transports that supplement fixed-route mass transports by providing individualized rides without fixed routes or timetables) penetrated fast in the public transport system.

In Bangladesh, the BEV is commonly known as Easy Bike. It has five batteries and carries six to eight passengers with power generated from rechargeable lead-acid batteries. The main source for charging the BEV is electricity from the main grid. The technological characteristics of an EV has fitted in well in Bangladesh due to the limited size of the country where its transport system has a prodigious reliance on road transportation than inland water and rail. Moreover, there has been a remarkable increase in the access to electricity in the country from 48% to 72%. (7th Five Year Plan, 2015)

Between 2005 and 2006, with more imports trickling in, easy bikes gained popularity in the rural and urban areas without the aid of radio, newspaper or television adverts. The main reason for this was its shared riding facility, low fare charges for short distance and the hop-in and hop-out facility. Researchers acknowledge that the local commuters, local manufacturers, importers, middle to low-income people have all assisted in the creation of demand for BEVs, in the absence of policies in Bangladesh.[5] Despite wide acceptance throughout the country during introductory phase, EVs gradually shifted away from the city streets. Factors like lack of engine and chassis number for registration, huge hindrance leading to scarcity of power etc led to ban of EVs from streets of some cities. Despite this, many divisional cities and most towns are  using the EVs for their short commutes in everyday life. There were around one million EVs running in Bangladesh, predominantly in district towns and rural areas as of March, 2019.

Domestic Manufacturing of EVs and Challenges in Bangladesh

Besides the aforementioned companies, there are upcoming companies who will be manufacturing passenger vehicles integrally. Nitol Motors is set to come with a locally-assembled electric vehicle. With the size of regular cars, the model is called Suvare and will cost about BDT 12 lakh.[9] Local automobile company Bangladesh Auto Industries Ltd (BAIL) plans to start making electric vehicles from 2020 with an initial investment of USD 200 million at the Mirsarai economic zone in Chattogram. 80 percent of the planned investment of USD 200 million will be sourced locally and the rest will come as Foreign Direct Investment (FDI). The plant in Chattogram is expected to manufacture almost 60 percent of the components of the vehicles, including lithium battery, motor, controller, software platform, chassis and body. The team will also create a web-based portal for co-creation in product and ecosystem development. The EVs are claimed to cut fuel cost by 90 percent and per kilometre energy cost will be less than BDT 2.[4]

Table: Expected Price of different types of EVs planned to be manufactured by BAIL

Domestic manufacturing, however, still has the following challenges to overcome: