The ancient Silk Road was once a trading route facilitating the transport of goods and technology between China and the Roman Empire. Through this route, silk was first transported to the west among many other then exotic goods. The trade route spanned a 6,400 km road following the Great Wall of China, crossing deserts and mountains, and finally shipping across the Mediterranean sea. It was also the route which led to the Italian merchant, Marco Polo, to be eternalized in history. And today, the trade route is being once again revitalized and ironically ending its route in Venice, a city not too far from Rome. 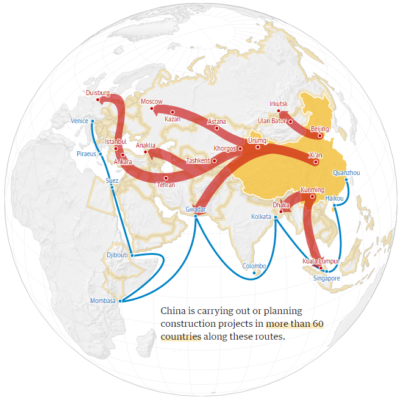 The project is set to encompass both land and sea (belt and road) with the same intent of improving trade relations in the region through infrastructure investments amounting to an excess of $1 trillion to 71 countries through loans according to a Morgan Stanley estimate [1]. Overall the project is set to include participation of countries accounting for over half of the world’s population and 25% of global GDP [1].

The initiative by China goes far beyond trade and logistics and also seeks to enhance money circulation, policy communication and understanding between nations. However, the project has met many critics, primarily superpowers of the region and neighboring countries such as India, Japan, and South Korea who are wary about the growing influence of China. Many developing nations who have yet to reach high levels of infrastructure development like Bangladesh, though, are welcoming the initiative with open arms in hopes of the additional economic benefits of trade the Belt and Road will provide. To date, Chinese companies have signed more than $340 bn in construction contracts for the Belt and Road [1].

Tightening Belt in Fear of Debt

The biggest risk of the Belt and Road initiative to the hosting countries is the famously dubbed ‘Chinese Debt Trap’. The term is a mechanism by which loans are provided in excessive amounts to countries for the sake of infrastructure development and economic or political concessions are extracted from the debtor country when it becomes unable to pay its obligations. And according to a report by the Center for Global Development, a majority of the receiving countries’ debt will belong to China after the projects are undertaken [1]. An interesting case of this is Sri Lanka, where a port had to be leased to a Chinese company for 99 years after the country was unable to make repayments of a loan used for development. Malaysia, Indonesia, and Myanmar who had committed to taking loans as well, have also backtracked and downsized many of its Chinese loans for development due to the very same reason. Other risks of undertaking projects of such a scale include corruption, unsustainable, and unprofitable ventures like Sri Lanka’s Mattala Rajapaksa International airport, which hosts only a few flights everyday.

The Belt and Road Initiative also possesses considerable risk to the Chinese as in countries with strong political oppositions who are averse to debt financed development may downsize, discontinue, or even default on the loans provided.

Bangladesh and the Chinese

For decades since the inception of Bangladesh’s diplomatic ties with China, the main focus of relations have been mainly focused on trade and defense cooperation, but recently has extended with increasing investments in Bangladesh’s infrastructure in power, energy, and telecommunications as well as a strategic partnership with Dhaka Stock Exchange (DSE) among many other projects (according to media reports, 25% of DSE shares belongs to the Chinese consortium).

But investments and trade relationships aside, the country is currently set to become a key hub in the Belt and Road initiative providing an overland connectivity to the Indian Ocean as well as a sea port for trade. In 2016, President Xi Jinping made a landmark visit to Bangladesh, during which the country joined the Belt and Road Initiative (BRI), showing a solidifying bilateral relationship. Since then, as of November 2018, Dhaka and Beijing have signed 8 projects worth over $9.45 bn funded by China, including the Padma Bridge Rail Link, Payra Power Plant, enhanced digital connectivity, and a power grid network enhancement project [3]. In total this amounts to a $38 bn investment in Bangladesh, $24.45 bn in bilateral assistance for infrastructure projects, and $13.6 bn in joint ventures, in addition to $20 bn in loans agreed for after the visit of President Xi [3]. They have also expressed interest in Bangladesh’s Blue Economy for investments. Overall, the total size of the loan makes China the largest pledger of financial assistance to Bangladesh.

Bangladesh’s interest payment for loans proportion to the national budget has been on the rise. For FY20, 10.91% of the national budget has been allocated to interest payments, however, it has steadily declined from 14.83% in FY15 [8]. And given the country’s progress towards graduating from Least Developed Country (LDC) status, coincidentally coinciding with principal repayment of large loans around 2024, Bangladesh may see itself in a pinch if it is not able to manage its credit risk. In the short term, the country has sufficient foreign exchange reserves to withstand shocks in the near future [9]. In the long term, given it’s weak presence in the region, this newfound source may be the solution to infrastructural development which is coming hand in hand with increased trade. The largest risk ironically to the nation’s cash flow management in fact, may be the rise of domestic non-performing loans and inadequate collection of tax revenue (whose gap to GDP is the largest in the Asia-Pacific region). 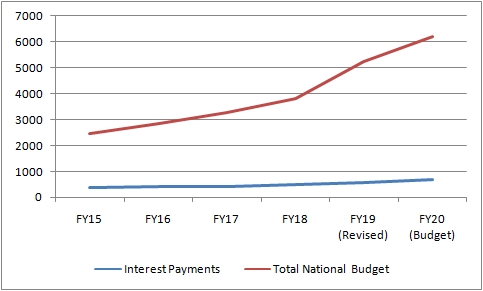 Balancing the Relationship with India

Bangladesh as a result of this newfound development is now in the middle of managing relations with China and India, two often opposing countries given their status as significant powers in the region in close proximity with one another. Although trade relations are tipped in the scale of India when it comes to reciprocating low tariff trading, Bangladesh may see more favorable terms in the near future. Else, India may face the risk of losing business to China given Bangladesh’s newfound status as a major city in the Belt. Bilateral trade between India and Bangladesh was estimated to cross $9 bn in FY18, with exports from Bangladesh exceeding $900 mn [4].

Ensuring Sustainable Development in a Country With High Hopes

Bangladesh is already on progress in undertaking mega projects to develop its infrastructure, but it must take caution to monitor its ability to repay its loans, else it may seen short term gains at the cost of sustainable growth. Even if concessions are given in the case of inability to pay back loans, unsustainable development may see the country facing debt crisis in the future.

Bangladesh currently has 11 Free Trade Agreements in progress and in effect according to Asian Development Bank. After its graduation from Least Developed Countries (LDC) in 2024, the country will have a 3 year period to continue enjoying LDC-specific benefits [6]. From then onward the country will see an increased credit worthiness and at the same time lose its eligibility for low interest loans. In the time afterwards, this would translate to growing interest rates and increased foreign debt. It will also lose its duty-free market access to all developed countries, except its apparel exports to the USA which has been on the rise due to the continuing US China trade war. As a result of this newfound change it’s estimated 5.5 – 7.5% of its total exports will be lost due to an additional 6.7% additional tariff, a loss set to equal to $2.7 bn every year after graduation [7]. Whether this loss can be offset by new trade flowing in through the Belt and Road, however, is a story for another time.