In a traffic-congested and extremely polluted city like Dhaka, bicycles remain an affordable green mode of transport. In Bangladesh, the number of bicycle users has been increasing rapidly due to the traffic congestion and rising purchasing power in the capital. According to Bangladesh Bicycle Merchant Assembling & Importers Association (BBMAIA), the local market demands nearly 1.5 million bicycles a year with an annual growth rate of 30%.[1]

With e-commerce and food delivery services sprouting in the country, the number of delivery companies is growing at a fast pace. In most of these cases, bicycles are used as the mode of transport to complete deliveries. Moreover, increased awareness about maintaining a healthy lifestyle among the young generation has also contributed to the growing demand. This is reflected in the successful attempt of breaking the world record for the longest single line of moving bicycles by 1,186 cyclists in 2016, organized by BDCyclists, a community-based social network of cyclists.[2]

Persistence Market Research (PMR) report estimated that the global market for bicycles would expand by 37.5% within 2016-24 and the market size would reach USD 62bn by 2024.[3] The European Union (EU) countries have the most bicycle-friendly cities and the EU consumers buy around 18 million bicycles per year.[4] Around 60% of the bicycles are supplied by local manufacturers and the rest are imported which represents a high demand for bicycles in the EU.

Bicycle exports from Bangladesh are mostly focused on the European markets such as the UK, Germany, Netherlands, Italy, etc. According to Eurostat, Bangladesh is the 3rd largest non-EU exporter of bicycles to the EU and the 8th largest exporter in the global market.[5] 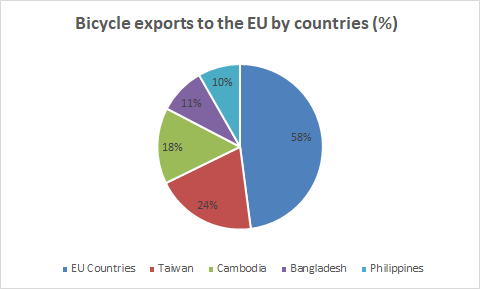 Furthermore, bicycles are the largest export of the engineering sector in Bangladesh, adding around 12% to light engineering exports and 0.24% to total exports. In FY 2017-18, the bicycle export industry earned USD 85 million with a 3.97% growth compared to the previous fiscal year.[5] 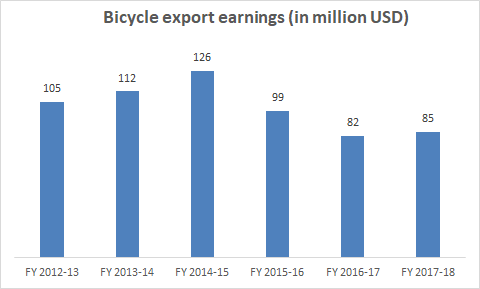 At present, there are three major exporters in the bicycle industry. Meghna Group, with its three factories, is the largest bicycle exporter. Alita Bangladesh, a Taiwan-based company in Chittagong Export Processing Zone comes in second place. The latest entrant in the exporting market is Rangpur Metal Industries which is a sister concern of Pran-RFL Group. The company started exporting in 2015 while meeting the local demand with its growing brand- Duranta Bikes.

Since 1993, imported Chinese bicycles have been conditional to anti-dumping duties, with an import tariff of up to 48.5% which was supposed to end in 2018. However, the EU has extended the anti-dumping duties on Chinese bicycles for a further five years to avoid market distortions and flood of imports which keeps the portal open for the bicycle export industry in Bangladesh to flourish.[4]

Stumbling Blocks for the Domestic Market

The bicycle manufacturing sector is fragmented into two markets. This includes contemporary, export-oriented original equipment manufacturers (OEMs), and small-scale or cottage bicycles and parts manufacturers catering to the local market. The interconnections between the two segments are extremely limited. Even though the bicycle manufacturers have been experiencing steady growth in exporting bikes, foreign competitors such as India and China are dominant in the domestic market. In fact, over 70% bicycles are imported to meet the local demand.[7] The issues that are plaguing local markets to flourish are discussed below: 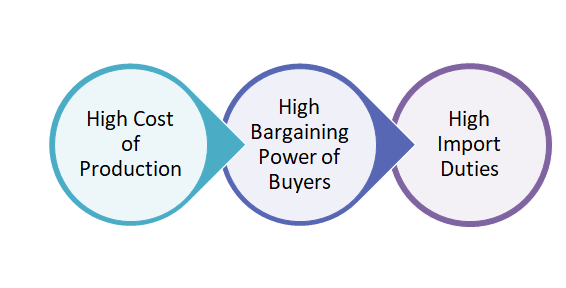 High Cost of Production: Local customers demand high quality and lower prices in bicycles. These demands remain unmet by the local manufacturers as the majority of the raw materials of bicycles are imported leading the cost of bicycle production to go higher.

High Bargaining Power of Customers: The switching cost of bicycles is low due to the dumping of Chinese bicycles. Moreover, foreign bicycles are in high demand as they offer better quality and attractive designs at a lower price.

High Import Duties: Increase of import duties from 10% to 25% on raw materials for bicycles place a huge threat to the emerging industry.[8] In fact, the average duty of 55% on imported spare parts to assemble bicycles such as brakes, gears, chains remains a large barrier.

Bicycle Industry: A Potential Driver behind the Economic Growth

To avoid traffic snarls in Dhaka city, there is no better alternative than bicycles in terms of feasibility and cost-effectiveness. Furthermore, as the number of smartphone users are increasing in Bangladesh, bicycle-sharing apps have high potential to grow in the near future. Jobike, a bicycle rental service has been launched in a few areas in Dhaka and Chittagong with further plans to expand in the country.

To help this business model succeed, the road infrastructure needs to be developed with the building of separate lanes for bicycle riders on all the city streets to ensure safe movement. There are a number of ways through which Bangladesh can take its bicycle market to the next level.

Cutting Import Duties: Reducing import tariffs and maintaining minimum quality standards on the domestic market would narrow the gap between domestic and export markets and make it possible to expand the domestic base of quality products.

Reducing Lead time: The congestion in ports and the delay in the delivery of imported parts are causes of longer lead times making the bicycles costlier and less competitive. Hence, strong backward linkage industry should be established for making finished bicycles within shorter lead times.

Announcing Tax Holiday: Cube, a German bicycle manufacturer company, has recently entered into Bangladesh with about BDT 100 crore in investments which can attract a lot of foreign buyers. A tax holiday would stimulate such new investments in the sector and help the exporters reduce over-dependence on imported parts.[9]

Diversifying Export Market: Due to the increasing adoption of bicycles from middle-class people and the rising awareness of bicycle-sharing systems like Mobike, Ofo, Didi, etc, the Asia Pacific is anticipated to be the most lucrative market for bicycles where Bangladesh can diversify its export market.[10]

Encouraging Bicycle Riders: Bicycles should be promoted as an eco-friendly transport and a large contributor towards a healthy lifestyle and abundant bicycle parking facilities should be provided to attract potential customers.

Both the export and domestic market of bicycles have a tremendous potential of thriving to success with broader policy level support. Hence, the policy reforms should be made with urgency to overcome the existing issues and give a strong boost to the positive growth of the bicycle industry.