Biscuits and Confectioneries Industry of Bangladesh

Whether it’s milk, chocolate, plain, or cream filled, Bangladeshis loves biscuits, and it’s been driving a 15% annual growth rate in the country[1]. A burgeoning middle class in particular, fueled by greater purchasing power, have turned to biscuits as the go to snack demanding both quality and low prices, leading to businesses turning to automation in order to scale and meet growing demands. Currently the market size of biscuits and confectioneries in Bangladesh is around $597-717 mn with big name brands holding 40-50% of the total market share[1]. Net export earnings of  biscuits stood at $80.41 mn in the first 6 months of the FY18-19, almost double of last years annual figure ($43.09 mn), and is forecasted to triple in the next few years[2].

Of the total market value of the industry, around $358 mn belongs to big name branded biscuits[1] such as Olympic, Haque, Danish, Nabisco, and Bangas. According to Bangladesh Auto Biscuits and Bread Manufacturers’ Association (BABBMA), total annual production of biscuits currently stands at an excess of 65,000 MT[2]. The biscuit and confectionery market is forecasted to grow at 15% over the next 10-15 years[1], 5% greater than the government’s target for GDP growth.

For FY19, wheat imports are forecasted to grow to 6.5 MMT as a result of growth in processed and bakery products consumption[7]. This is largely due to the emergence of biscuit and confectionery factories complemented by expected higher global production and lower prices according to a USDA report. Over 80% of Bangladesh’s wheat consumption comes from imports of which the private sector currently purchasing over 90%[7]. According to the Ministry of Food, the stock of wheat, a key raw material for the market, has also more than doubled from 177,710 MT to 364,390 MT from 2017[7]. Consumption is forecasted to grow to 7.7 MMT in FY 19 driven by increased consumption in processed foods from wheat flour.

Recently the country saw a reduction in the 40% duty on sugar imports from India, the world’s second largest producer[8]. The sugar mills in Bangladesh currently hold 139,000 MT of sugar in stock[8]. As a result, the prices of sugar may decrease at a greater rate than last year estimated at 8.7% according to Trading Corporation of Bangladesh. In FY 18, consumption of sugar was 2.695 MMT, a 20% growth from the year before, in FY 19 it’s expected to rise to 2.98 MMT[8].

Like the other two key ingredients, consumption of edible oils is also on the rise with an overall increase in consumption for the country. 90-92% of requirements are currently met through imports averaging 2.3-2.4 MMT[9].

Overall, an increase in the key ingredients, alongside an increase in domestic consumption in the country powered by a growing GDP per capita point to increased demands for biscuits and confectioneries in the future. Falling prices further reduce costs of production which is key to ensuring long term survival in the industry given currently market players are investing in automation to meet growing demand. 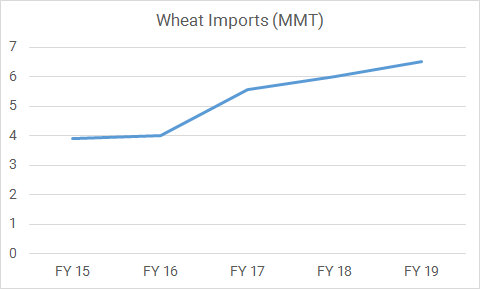 Historically, the market was  highly labor intensive and dominated by small bakeries, but today it has grown to one filled with an estimated 5,000 bread and baked goods makers, and around 100 automated factories[2]. Despite the many market players, it is mainly dominated by big brands due to their competitive advantage in being able to provide greater quality and lower prices through automation. This has also resulted in driving out imported biscuits from India, Malaysia, and Indonesia. Currently, domestic manufacturers meet 90-95% of demand for biscuits[1], while catering to a burgeoning export market.

Olympic Industries is currently the largest manufacturer, distributor, and marketer of biscuits in Bangladesh[2]. Its key brands include Energy Plus, Nutty, Tip, Chocolate Plus, Digestive, Cracker Jack, and Lexus among a total of 33 others[2]. In FY18, total revenue added up to $154.4 mn, with net margins on the decline from last year primarily due to a change in accounting policy and a corporate reorganization of sales and marketing departments, causing selling expenses to increase by $2.03 mn to achieve greater performance in the long-term[3]. Biscuits, confectionery, bakery, and snacks made up 97.05% of FY18 total revenue compared to last year’s 96.80%[3] with this segment of products expected to continue accounting for a great majority of revenues in the future as new product lines are introduced by the company. Compared to last year, sales grew 8.28% YOY in volume, with a 14.08% increase in sales of the biscuits and confectionery segment[3]. Exports made up 1.01% of revenues for FY18 ($1.56 mn, a 127.04% YOY increase)[3].

According to an EBL report, Olympic Industries has around 30% market share in the organized and industrialized biscuit market[1].

Olympic Industries had a 13.72% CAGR in net profit margin and 7% CAGR in gross profit margin from 2012 to 2016[1], mainly due to strong efforts of enhancing production efficiency and capitalizing on economies of scale. In effort to maintain these profit margins while expanding and introducing new product lines, the company has been taking efforts to vertically integrate its supply chain to overcome the challenges of achieving full automation.

Haque Food Industries was founded in 1947 as a family business, dominating the local market then with its flagship brand of biscuits, “Mr. Cookie”. Haque Food Industries is a concern of A.T. Haque, and exclusively deals with food products. Currently the company has 26 biscuits & cookies and 3 products in their confectionery line.

Danish Biscuits is the concern of Partex Group and a leading biscuit company of the country. Despite the market is being highly competitive, Danish has been able to maintain a strong market position by providing quality products at low prices. Lexus biscuits is one of its flagship products.

Nabisco is a leading  and one of the oldest biscuit brands in Bangladesh with a presence in the market before the country’s independence. It was highly popular during the 80s and the 90s. Like other major competitors in the market, the company has a wide variety of products and Nabisco Glucose is its flagship brand. Compared to other brands, Nabisco maintains a low price strategy, making it highly popular in the rural areas of the country.

Established in 1979, Bangas experienced steady growth with their signature product Bangas Biscuit. However, they faced difficulties in survival due to decline, but revived in 2009 through new investments in a modern manufacturing facility and diversifying its product portfolio by introducing noodles, chips and other products. In FY17, the company saw a turnover of $1.40 mn, a revenue growth of 3.02% YOY, however, experienced a net loss in FY16 and FY17 mainly due to lack of capacity utilization due to falling demand and increase in the prices of raw ingredients[6]. In FY17, the company produced 555,597 kg of biscuits and 674,780 kg of bread[6]. The company currently exports its products to countries throughout Asia, USA, and parts of Europe. It occupies less than 5% of the total market share.

Challenges in the Industry

Surviving in the Long Term

Due to a lack of facilities to ensure  cheaper and quality goods, it is unlikely that smaller market players will be able to compete with larger name brands given their higher costs of production as most of them still use labor intensive production processes. Their purchasing power is lower further adding to costs. However, they may be able to find a space in meeting local market demands if they are able to produce unique products in the market. In the near future we may see less biscuit brands hosted by large market players in order to achieve greater operational efficiency and cater to a growing export market with varying tastes.