Capital Markets in Bangladesh: A Call for Prudence and Informed Investment

In capital markets across the globe, investors are faced with a variety of financial assets to invest in. As different securities have different associated risk factors, the basic instinct for the smart investor has been to diversify the investment portfolio across different instruments to minimize risk. In Bangladesh, this is not adequately possible as investment options are limited. Almost all of the general public’s funds are channeled into an ailing banking sector wherein interest rates often cannot trump inflation, thus generating little to no return for investors.[1]

This is not by choice–there exist few options for potential investors in Bangladesh seeking to put money into financial assets. The stock market in Bangladesh is highly volatile where stock prices have been manipulated in the past by so-called “Big Sharks” to lure in naive investors. On the other hand, the bond market never properly developed. At present, there is only one corporate bond being traded on the Dhaka Stock Exchange in addition to regularly traded government bonds.11 The derivatives market is practically non-existent in Bangladesh. The global market value for derivatives stands at USD 27 trillion with a notional value exceeding USD 640 trillion.[1] However, nearly a decade has passed since the first derivative was issued in Bangladesh and no proper market has yet to be developed.

What’s Going on in the Capital Markets?

2018 proved to be a challenging period for capital markets. After the market boasted an impressive return of  24% in 2017, the broad index DSEX fell by 13.8% in 2018, clearing out $4.3 billion in market capitalization.[4] The average daily turnover fell by 37% to that of 2017, amounting to approximately $65.6 million in 2018.[4] The financial composite, which primarily consists of banks, NBFIs and Insurance, fell by 18.6%, being the principal reason why the rest of the market fell by 13.8%.[4] The main driver behind the capital market’s incidents in 2018 was the hike in interest rates.[4]

The financial sector was affected by the difference between risk-free rates of National Savings Certificates (NSCs) and bank deposit rates. The higher rates offered by NSCs have channeled funds away from the banking sector and towards these government bonds, creating a liquidity crisis in the process.[4][10] This unusual phenomenon created a deficit of funds in the banking sector, creating a shortage of funds for would-be borrowers. Consequently, investors have begun to lose confidence in the performance of the banking sector. By dampening the supply of loanable funds, investment could drop to such an extent that an economic recession could be right around the corner. 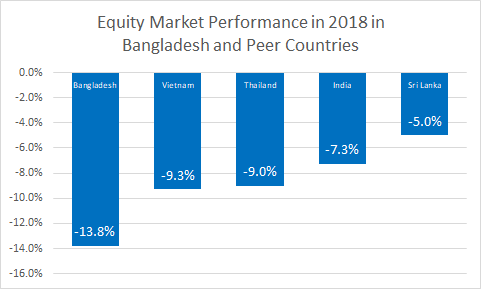 The banking sector of Bangladesh has been in dire straits due to the rising incidence of non-performing loans (NPLs), little-to-no corporate governance and a lack of capital according to the Asian Development Bank.[8] As capital markets are not fully mature and developed yet, the banking sector is arguably one of the most crucial components of Bangladesh’s economy. If the banking sector does not perform well, neither will the economy. While the ratio of NPLs to total loans did steadily decrease to 6.1% in 2011 from 41.1% in 1999, that trend is witnessing a reversal.[8] The proportion of NPLs to total loans in Bangladesh is the highest in the region, at 11.5% as of 2018 compared to 10% in India, 2.5% in Sri Lanka, 2.3% in Vietnam and only 1.7% in Nepal. 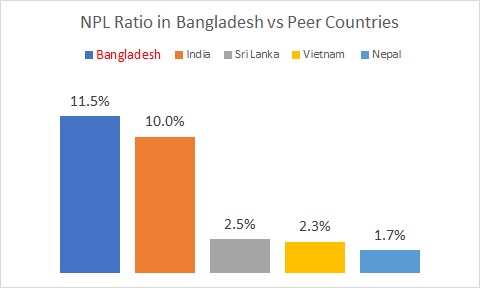 Default loans rose to 26.38% last year, revealing the extremely weak health of the banking sector.[7] Janata Bank was responsible for 58% of this increase. Most of these banks are surviving on taxpayers’ money.[6] Analysts cited poor lending practices and repeated government intervention as the main culprits. Apparently, many of these loans had turned bad long ago but had remained concealed due to the banks’ rescheduling practices.[7]

Khondker Khaled Ibrahim, a former deputy governor of the Bangladesh Bank, said that both public and private banks had repeatedly provided loans to the unqualified.[7] State-owned commercial banks (SCBs) registered 28.2% of their loans as NPLs as of June 2018.5 Approximately 47% of all NPLs were concentrated in 5 banks.[5] Six state-owned commercial banks control nearly a fourth of all bank assets in the country. Typically, the government appoints the chief executives and board members of these banks and often directs to them actions that can have unwanted consequences.[9] These factors deterred investors, which caused roughly $2 billion of lost market capitalization (Mcap).[4]

The current account deficit also accounted for the fall in the stock market index. The deficit grew to its historical highest magnitude of $9.8 billion in 2018.[4] As the supply of local currency increased in foreign exchange markets, this puts pressure on the exchange rate. Consequently, the dollar became more expensive against the local currency.[4] During this time, the central bank constantly supported the currency, reducing the liquidity of the Bangladeshi Taka.

The profitability of many corporations was hit as the price of imported raw materials rose.[4] Expecting a currency devaluation, foreign fund managers reduced their presence in the capital markets. This affected large Market Capitalizations and worked to pull the overall index down with them.[4] The uncertain political climate leading up to the election was another factor subduing stock market performance, but analysts expect that to be a short-lived phenomenon as the new government has been formed without much problem.

Many of the problems facing capital markets in Bangladesh are due to poor management, unethical practices, and under-capitalization. Any attempt to alleviate what appears to be perennial issues of the capital markets should incorporate effective measures to tackle the aforementioned factors.

Strengthening the stock market is a key priority. Bangladesh’s stock market is afflicted by extreme market volatility, stock price manipulation and insider-trading, all of which serve to encourage gambling and dissuade genuine investors from entering the market.[4] The majority of people also do not know how capital markets function, and as a result, educated investors are in shortfall.[3] These realities make the equities market an unviable investment option and means of financial intermediation. Greater oversight is required to make sure such practices are eliminated and strong punishments need to be instituted to deter their occurrences in the future.

Additionally, the development of a robust bond market is another key priority. In 1985, the Industrial Corporation of Bangladesh attempted to establish a corporate bond market. The first corporate debenture was issued in 1987. However, many of these bonds issued through IPOs defaulted on their coupon and principal payments.[1] As the market regulators could not contain these incidences, public confidence in these instruments eroded and the bond market never developed.[1] Corporate bonds are priced using government bonds as a benchmark. However, the government bond market in Bangladesh is still nascent and lacks bonds with varying maturities. Consequently, bond pricing could not be done effectively in Bangladesh.

To add to the problems, there was no standard rating system to signify the quality of these bonds.[1] The lack of regulation, high tax rates and cost of issuing debt instruments all contributed to the downfall of the bond market. To ensure that a thriving bond market emerges in the country, it is imperative to address these concerns.

The development of a proper derivatives market is also of importance. Derivatives are used primarily to manage risks. The gross market value of derivatives is $27 trillion worldwide with a notional value exceeding $640 trillion.[4] This highlights how important derivatives are in the modern economy. However, the derivatives market in Bangladesh is practically non-existent. Before establishing a robust derivatives market, policy-makers will have to monitor the market carefully, and establish proper regulations that allow market participants to contain systemic risk.[4] 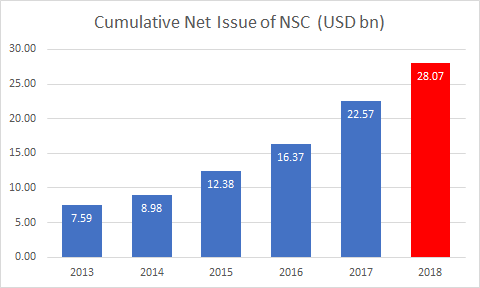 The banking sector’s health must be adequately addressed in an economy as dependent on the banking sector as Bangladesh’s. The central bank will have to take effective measures to restore corporate governance to the banking sector. Political influence has long been crippling the banking sector when it comes to lending. In order to ensure the health of the sector, political connection with the management and the board of directors needs to be delinked.

The banking sector provides vital support to the RMG industry in the form of back-to-back Letters-of-Credit (LCs).[12] This helps local RMG firms establish backward linkages with their raw material suppliers. However, a threat to the banking sector in the form of a liquidity crisis and the growing incidence of NPLs directly threatens these very same backward linkages. Therefore, a banking disaster could spell trouble for ready-made garments, slowing down the economy and fueling unemployment.

Additionally, the interest rate difference between bank deposits and NSCs needs to be closely monitored if banks are to maintain healthy liquidity. As NSCs are presently offering higher interest rates than bank deposits, a massive amount of funds is being diverted to NSCs away from the banking sector, severely hurting its liquidity.[4] Consequently, the government’s interest rate liability has gone up.[2] In recent years, the volume of NSCs has steadily increased as shown in the above figure. However, to attract more deposits, banks will have to increase deposit rates which will in turn increase lending rates. NSC rates will have to be rationalized so that these instruments reach only their intended audience and only in the intended amounts.[4]

Another emerging economy, Russia, is also facing a banking sector crisis.[14] With its ratio of non-performing loans higher than in other emerging economies, its banking sector is in poor shape despite bailouts by the government. According to the World Bank, measures such as increasing capital requirements and strengthening resolution regimes have gone in the right direction.[13] Additionally, enforcing stricter lending regulations and monitor the private sector’s risk-taking can help avert similar crises.[13]

It is evident that the capital markets are a crucial element of any well-functioning economy.  While it is true that 2018 was a difficult year for the capital markets, 2019 looks to be much better. The calmer political climate post-election season lends credence to this optimism. If capital markets are strengthened, more companies–both foreign and local–will be encouraged to enter it and gain access to greater financing. With proper regulation and monitoring, the unethical practices that have plagued the stock market in the past can be eliminated, thus luring in genuine investors. This can supercharge the economy.

However, if things continue the same way as they have so far, the picture will not be so bright. If the banking sector’s health continues to decline, the whole economy will be adversely affected due to systemic risk. Growth will slow down and foreign companies will close shop and leave the country. This may result in an economic downturn or recession. In order to avoid this potential reality, it is imperative that policy-makers and capital market regulators get together and immediately address the most pertinent issues of the financial markets. In doing so, a possible impending disaster may be averted.