It has been a long time since Bangladesh has settled into the moniker of Development Surprise thanks to its high, and consistent rate of GDP growth.

Beginning July 1 of 2019, The government approved a Tk 2.03 trillion development budget for the same fiscal year. [1]

The Annual Development Programme (ADP), which is the operational document of the Government of Bangladesh’s 5-Year Plan, includes all types of government-funded and Foreign-Aided Projects.

As part of the ADP for the fiscal year, certain allocations indicated the firm stance of the government towards welfare and development. Rural development and institutions were allocated Tk 151.57 billion or 7.48 %; Health, Population and Family Welfare were allocated Tk 130.55 billion or 6.44%; Agriculture Tk 76.16 billion or 3.76%; Water Resources Tk 56.53 billion or 2.79%, and Public Administration Tk 50.24 billion. [1]

The Foreign Aid Trend in Bangladesh

Net official development assistance (ODA) consists of disbursements of loans made on concessional terms (net of repayments of principal) and grants by international organisations or countries to promote economic development and growth. This includes both BIlateral and Multilateral Aid. In the past, Bangladesh was far more reliant on foreign aid than it is today.

This apparent decline in reliance has largely been due to Bangladesh’s own proliferating industries such as RMG, Pharmaceuticals etc. that have propelled its economic growth and development. Alongside this, the increase of the size of the government’s own public expenditure has played an important explanatory role.

Regardless of that fact, there is a significant role of ODA in how Bangladesh is tackling the achievement of Sustainable Development Goals moving forward. 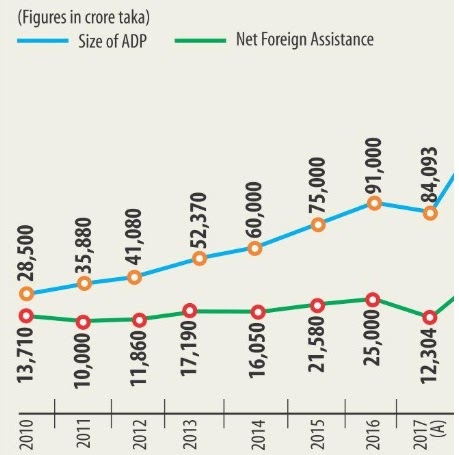 A Picture of Multilateral and Bilateral Aid

Multilateral Institutions form the bulk of foreign aid that Bangladesh receives and these most often materialize in the forms of developmental projects.

The Asian Development Bank (ADB) is one of the leading institutions supporting development in Bangladesh. An overview of their financing activities is presented below 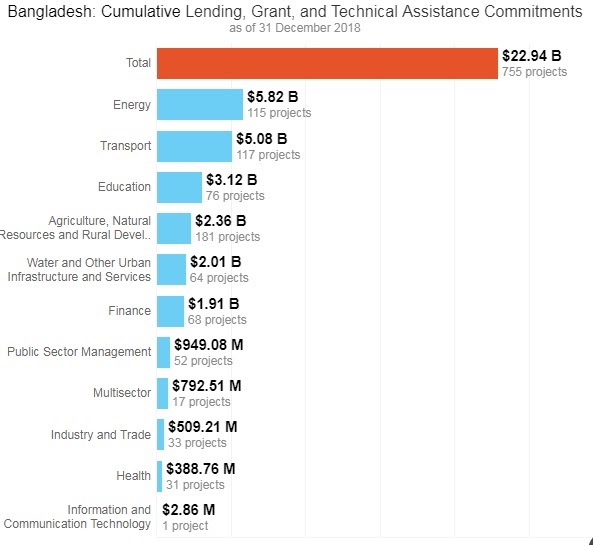 The UNDP has around 37 projects dedicated to aiding development in Bangladesh and achieving SDGs. An overview of their areas of focus and budgetary allocation is given below

The International Finance Corporation (IFC) has a dedicated portfolio of about $1.52 billion [5] for promoting and facilitating development in Bangladesh through investing in critical infrastructure; boosting financial inclusion; enhancing textiles competitiveness and improving inclusion in terms of energy access across the country.

The World Bank Group has also contributed significantly in the development of Human Resources, Labor participation, Food security and other major areas. An overview of their lending commitments is given below 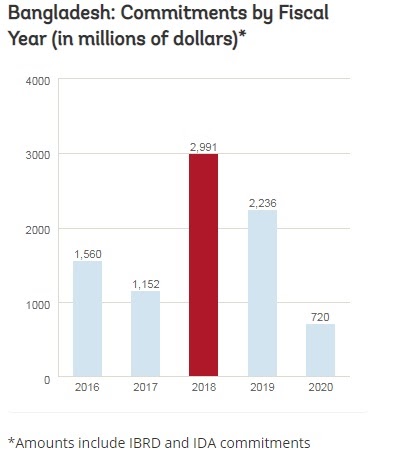 Bilateral Aid has been on a steady downward decline since FY04. A likely reason behind this may be due to a lack of established trade deals between Bangladesh and other potential bilateral partners.

Coupled with the post-Rana Plaza Tragedy backlash, bilateral aid has been much more stringent and conditional.

Graduation from Least Developed Country status in the near future and possible revocation of Generalized Scheme of Preferences(GSP) facilities may cause this trend to continue unless such deals are secured. 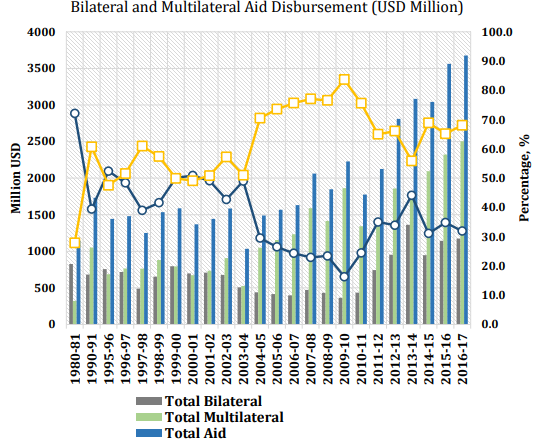 The proper utilization of Foreign aid is crucial to not only paving the way for sustainable development for Bangladesh, but also in combating unforeseen challenges such as The Coronavirus pandemic crisis.

There has been a recent request by the Government of Bangladesh to The World Bank for USD 500 million budgetary support to help aid public expenditure and provide relief during the mandated country-wide quarantine which has staggered business activity.[6]

While the acquisition of these funds would be directly used as Public Expenditure for relief, general utilization of foreign ODA is constrained because of a number of reasons.

With the emergence of modern challenges such as COVID-19, the way forward on the path to recovery will undoubtedly be paved at least partially with foreign aid. It will remain crucial that net incoming funds are therefore used efficiently, and that the environment to facilitate timely projects can securely be in place when the time comes.