DFS in Bangladesh: Beyond Coffee Shops and Consumer Purchase

Munad, a PayPal engineer and a non-residential Bangladeshi, has come to visit Bangladesh after a long time and is in constant awe of the amount of transformation the country has gone through in the last decade. From technology integration to developed infrastructure, he was hard-pressed to find similarities between the Bangladesh he had lived in a decade ago and the Bangladesh of now, an evolving digital cornucopia of 165 million people.[1] With 45 million smartphone users, 35 million unique mobile internet subscribers[2] and a startling social media presence of close to 25 million users[3], the country is going through an unpreceded period of digital gentrification. In conversation with him at a renowned coffee shop in, adorned with flashy table tops from DFS providers boasting discounts on digital payments, the discussion inevitably turns to his trade, mobile money, and the investment potential in Bangladesh.

Having had similar conversations with potential investors for Bangladesh, I wasn’t surprised by his questions about the potential of building DFS based products for millennial consumers, who make up roughly 46.9% percent of the urban population.[4]

The smartphone and internet-bred digital millennials of Bangladesh are diverse in their consumption behavior and exemplifies a penetration in Bangladesh, attributable to stringent KYC requirements and lack of credit footprints of most of the population. MFS has growing demand for more convenient lifestyle solutions. What Munad and other aspiring foreign investors in Bangladesh miss out on is the hidden market of close to 139 million people (84.24% of the population) making up the ‘Aspirant’ and ‘Bottom of the pyramid (BoP)’ segments of the population.

DFS Penetration Has Been Phenomenal So Far

DFS in Bangladesh is mainly synonymous to mobile financial services (MFS) due to the emergence of bKash in 2010. bKash has managed to fill a vacuum that was previously being catered to by logistics companies transferring funds at high charges and informal networks of money mules. Currently, 18 banks and NBFIs have an MFS license and as of December 2018, there are close to 67 million users using the service with an average transaction of BDT 316 billion being conducted each month, growing at an average CAGR of 2%.[5] 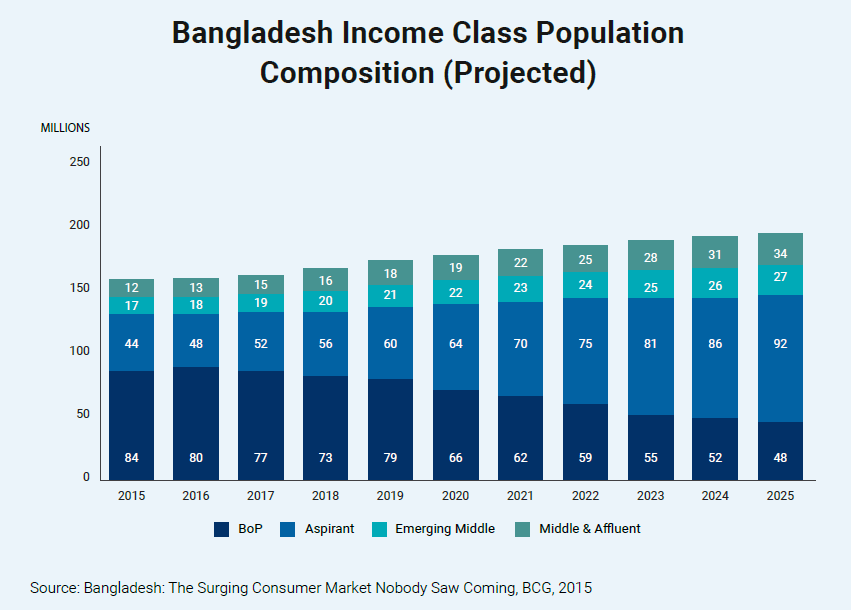 Similar to bKash, DBBL’s Rocket, a mobile money app is considered to be the second largest player in the DFS market. DBBL is one of the leading local banks in Bangladesh and has the largest network of ATMs in the country that are capable of DFS transactions, which is why Rocket has been so popular among users.

Around 28% of DFS transactions are still being conducted as Over The Counter (OTC) transactions through agents and the challenge for DFS providers is moving users towards more personal account based transactions. Readiness indicators of the user group are encouraging with at least 92% of users having a National ID, a basic requirement for opening DFS accounts. 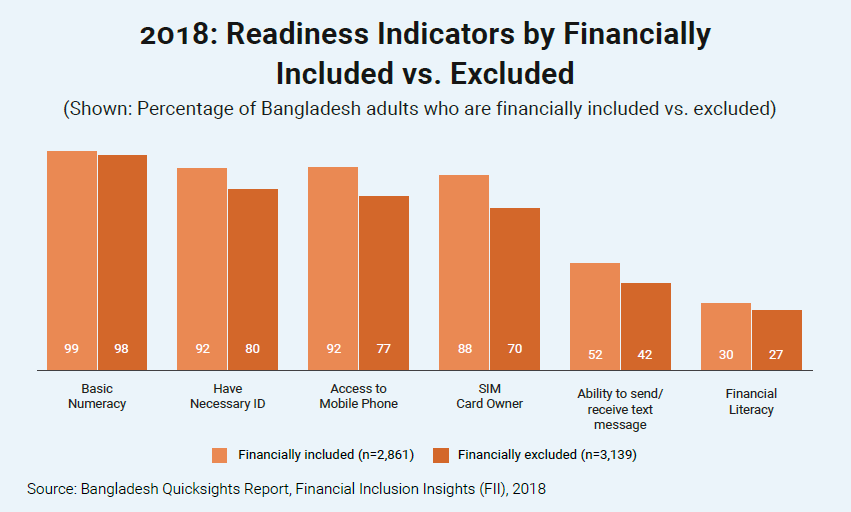 DFS has been Instrumental in Driving Financial Inclusion in the Country 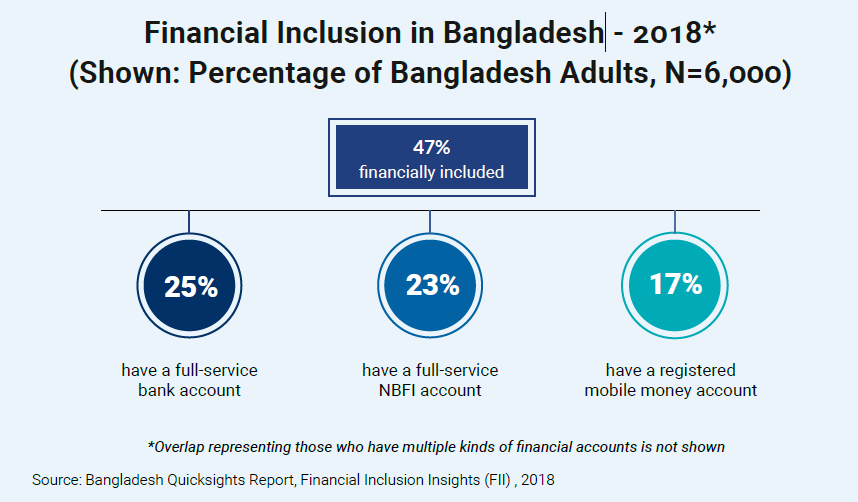 Finding the next stream of DFS based revenue in Bangladesh is no longer about finding the right target group but about crafting the right strategy to capture the market of users that have emerged in the last decade. From blue collar workers receiving their salary for the first time digitally to SME business owners receiving their loans through MFS, there’s a lot of avenues of usage DFS that haven’t been perfected as of yet. However, progress has been encouraging so far.

In one of our studies with the Bill & Melinda Gates Foundation, we saw that close to a million workers in the apparel sector were now receiving salary in a digital format and this number is increasing through combined efforts of DFS providers and apparel suppliers. In the microfinance sector, the usage of DFS has been equally inspiring, especially for women borrowers. 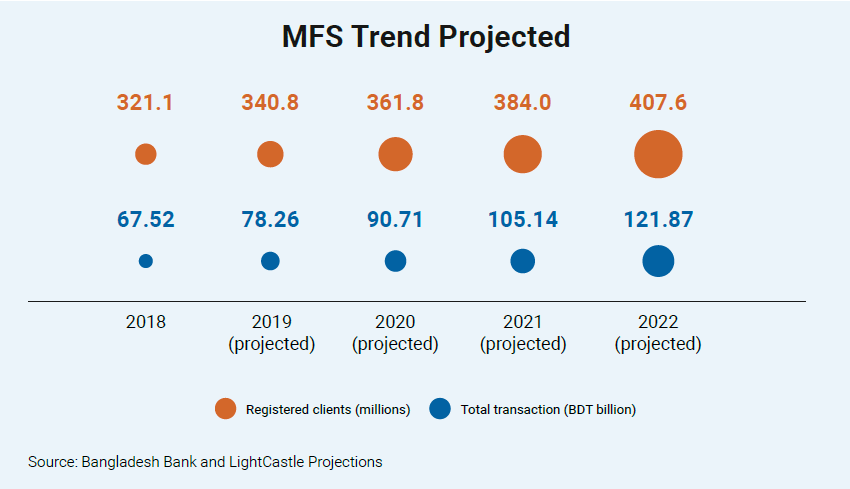 Industry experts believe close to 2% of women clients are now unofficially using mobile money to make repayments and are utilizing DFS. Even if just a 15% transaction digitization is achieved this year, the industry could transform the lives of close to 4.5 million women in a matter of months.

So the final question comes down to what needs to be done to be able to successfully increase a 67.5 million user base to double its size within the next four years?

The major growth impediment to higher DFS penetration is constrictive policies. Mainly, there’s a BDT 10,000 cap on cash-out cap MFS accounts, which significantly restricts the users’ ability to access their cash. Admittedly, the industry is fairly new to regulators and AML/CFT based regulations are crucial in ensuring the long-term sustainability of the industry. However, policymakers need to take measures to facilitate further usability of DFS by increasing cash-out limits gradually in order to actually let the industry grow in controlled phases.

The reason a cash-out cap is challenging is that most users are still not being able to utilize their money digitally as frequently as needed. Cash-out charges are also a detriment as it’s an added cost to the consumer. DFS providers need to find the right strategy to deepen the ecosystem of merchants to allow higher digital transactions, which will eventually bring down the transaction costs of the user base. This would enable more users shift to a DFS faster. DFS providers have seen apparel workers withdraw 60% of their salary in cash within the first week of salary received after the first month of being digitized. However, after 9 months, the cash-out reduced to 40% of their salary. This shows that users begin to trust DFS services after being habituated with the system. This cash-out would reduce further if they had more ways to spend their money digitally.

Lastly, we have a perception that a lack of financial literacy is the major reason behind blue collar user groups not adopting DFS. In practice, a lack of tech literacy is a more pressing reason why DFS adoption is lower among this income group. Around 98% of non-users have basic numeracy skills necessary to conduct rudimentary DFS transactions but around 42% do not have the ability to send or understand text messages. DFS providers need to structure products and services with the end user in mind and they also need to build a more efficient process of teaching the average user on how to use DFS.

This article was written by Rageeb Kibria, a Senior Business Consultant at LightCastle Partners. For any queries, he can be reached at [email protected]. This has been published as part of LightCastle’s 6th year anniversary publication, “LightCastle Featured Insights 2019“.