Doing Business 2019: How is Bangladesh doing?

Bangladesh has been hovering at the bottom rung in the doing Business ranking, according to the flagship publication of The World Bank Group. – ‘Doing Business 2018’. From Afghanistan to Zimbabwe, 190 economies have been compared, among which, Bangladesh has been ranked 176th for ease of doing business. The report attributed the marginal improvement of Bangladesh on trade facilitation measures. Bangladesh scored 41.94 on a total of 100, which is 0.91% higher than the previous year.

Bangladesh ranked 179th in providing electricity which is an improvement from last year’s 185th position, which represents the investments in power sector over the past years. The time required for obtaining a new electricity connection has reduced from more than 400 days in 2014 to less than 150 days in 2018.

Bangladesh ranked at 183rd for registering property and 151st in paying taxes, both of which are better than the previous year. However, Bangladesh’s ranking declined for indicators such as starting a business, getting credit, protecting minority investors, dealing with construction permits, and trading across borders. 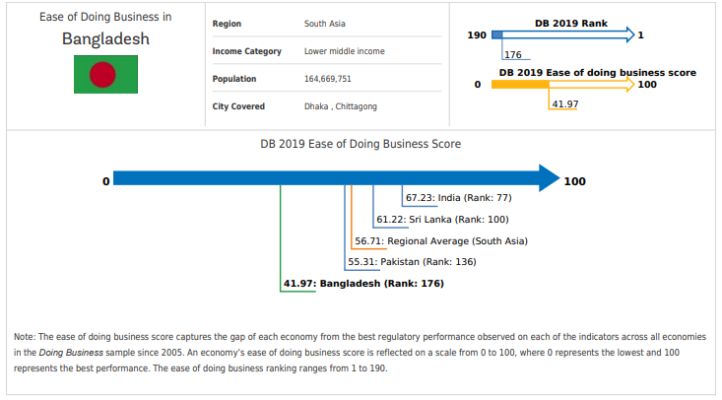 Compared to Bangladesh, other South Asian economies performed better in the ease of doing business for domestic, small and medium enterprises with Afghanistan and India rated as the top improvers. Afghanistan, implementing record five reforms, moved to 167th rank making them a top improver for the first time and India carried out six reforms in the past year, advancing to 77th place in the global ranking. Even though Bangladesh has taken some initiatives for doing business easier, the marginal change in Bangladesh’s position in the index shows that the pace of reforms needs to be increased significantly.

The 10 top economies in the ease of doing business ranking share common features of regulatory efficiency and quality, including mandatory inspections during construction, automated tools used by distribution utilities to restoring service during power outages, strong safeguards available to creditors in insolvency proceedings and automated specialized commercial courts. The economies with the most notable improvement in Doing Business 2019 are Afghanistan, Djibouti, China, Azerbaijan, India, Togo, Kenya, Côte d’Ivoire, Turkey and Rwanda. New Zealand tops the index followed by Singapore and Denmark, while Somalia tagged as the worst country on doing business in the world.

Author: Dipa Sultana is a final year undergraduate student at North South University and a Junior Associate at LightCastle Partners. With dual majors in Finance and Marketing, she aims to pursue higher degrees in Data Analytics.