E-Waste Management: Time for a Reboot

When a new phone was launched in the market last month and you rushed to buy it, what did you do with your old one? What happened to your old computer which you replaced with a high-end laptop last year? The disposal of these discarded or obsolete electronic products or electrical materials is referred to as electronic waste or e-waste.

What makes e-waste different from general waste is that e-waste comprises a multitude of components carrying toxic substances. Of the solid waste streams, e-waste can represent 70% of the hazardous waste that ends up in landfills as these contain toxic substances like zinc, lead, cadmium, chromium etc.[1] 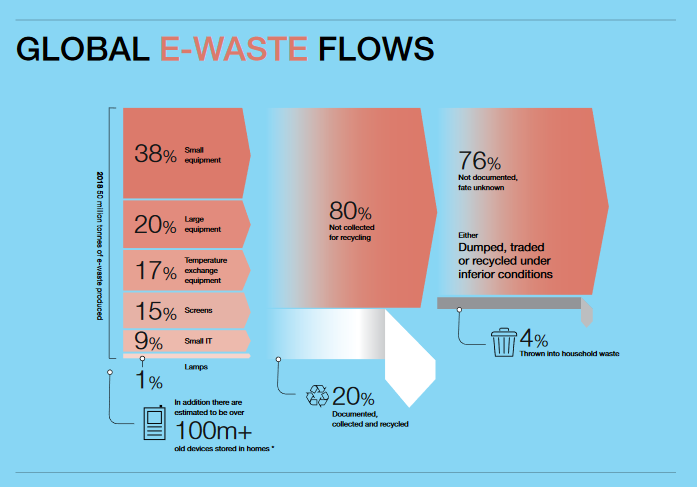 According to the World Economic Forum, the e-waste stream has reached 50 million tons in 2018, becoming the fastest-growing waste stream in the world as people are regularly upgrading their electrical devices at an alarming rate.[1] Only 20% of this e-waste is properly recycled globally mostly in China, Nigeria, Japan, Taiwan etc and the remaining 80% is dumped in landfills or informally traded resulting in a loss of a lot of economic value from extractable materials from e-waste and placing a threat to the environment. Therefore, it is imperative for the e-waste generating countries to build a circular economy for extracting the lost value from e-waste. 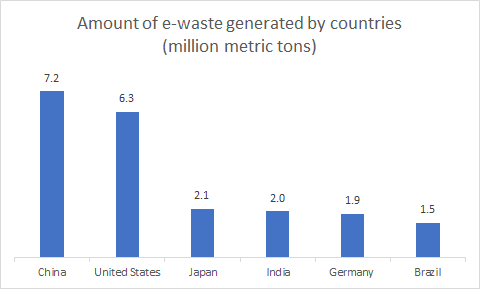 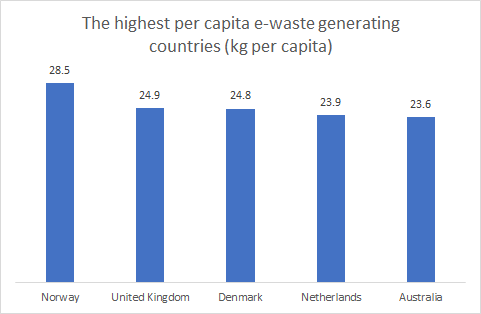 According to the United Nations Environment Programme, e-waste are informally traded from the developed countries to developing or less developed countries due to lack of strong national regulations and enforcement. To prevent this process of transferring hazardous waste, an international treaty, Basel Convention was developed. Even though 187 countries have ratified the treaty, large amounts of e-waste continue to be shipped illegally, mostly in Asia, earning this region the ignoble tag of the world’s junked electronics dumping ground.[1]

Rapid urbanization and continuous economic progress are causing the unstoppable growth of e-waste in developing countries including Bangladesh. In 2018, Bangladesh produced around 0.4 million metric tons of e-waste with about 20% growth rate per year.[4] 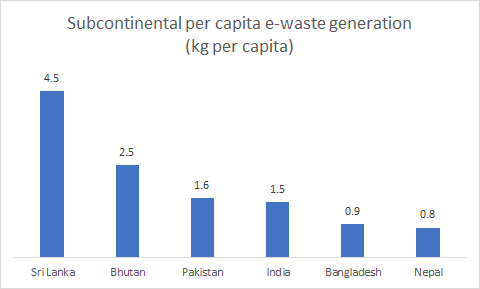 Another critical issue behind the e-waste generation all over the world is planned obsolescence, a strategy of designing a product with an artificially shorter useful life to make it go obsolete after a certain period of time. From light bulbs to laptops, producers reduce the service life of almost every consumer electronics product for generating sales by increasing repeated consumption, giving rise to e-waste generation.

Shipbreaking Industry: The shipbreaking industry of Bangladesh secured the top position by dismantling 47.2% ships of the world in 2018.[5] The industry alone generates various types of e-waste as the steel of scrapped ships is coated with paint containing toxic substances such as lead, cadmium, chromium, zinc, arsenic etc.

Consumer Electronics Industry: The consumer electronics market size stands at USD 1.37 billion with a growth of 15%.[6] The products primarily include refrigerator, television, air conditioner etc. Furthermore, among the 160 million population, there are more than 150 million mobile users in Bangladesh and the number is spiralling up. Eventually, all of these electronic products will lose their lifespan and will contribute to the exponential growth of e-waste production.

ICT Development: Recognizing the immense potential of the ICT sector, the Government of Bangladesh has taken a good number of initiatives to help the outsourcing sector flourish. The vision 2021 of becoming “Digital Bangladesh” predicates the extensive usage of electrical and electronic products throughout the country.

Illegal Trade: As one of the developing countries in Asia, Bangladesh is also a recipient of e-waste from Europe, North America and other developed nations through illegal trade routes, adding to the existing pile.

Besides toxic substances, e-waste also contains precious metals such as gold, copper, silver, iron, aluminum etc. In fact, each ton of e-waste comprises a hundred times more than a ton of gold ore which are recoverable through recycling e-waste. The globally generated e-waste per year is worth more than USD 62.5 billion which can be regained through proper implementation of e-waste management and recycling systems.[1]

In 2019, the global e-waste recycling market was valued at USD 40.3 billion with an estimated growth at a CAGR of 15.5%.[7] In Bangladesh, a few e-waste recycling companies have recently started to function but failing to run at their full capacity due to a shortage of e-waste.

The recyclers are getting only 3% of the total generated waste, while the rest is dumped into landfills. The enlisted recycling companies are Azizu Trading Co., Yousuf Enterprise, Green Bangla Corporation, JR Enterprise, Zaman Enterprise, Techno Fair, NH Enterprise etc.[8] The lack of e-waste regulation remains a crucial obstructing factor in the growth of the e-waste recycling industry.

Lack of Formalization of E-waste Disposal

Currently, Bangladesh has no specific environmental policies or guidelines for the e-waste management problem. While a draft regulation on ‘E-waste management laws’ was established and amended in 2011 and 2017 respectively, under the Environment Conservation Act 1995, no progress in the adoption and enforcement of rules has been evident.[9]

Bangladesh is still lagging behind compared with other South Asian countries such as India, Pakistan, Sri Lanka and Nepal as all these countries have already established effective laws and regulations on e-waste management. This leads to indiscriminate dumping of e-waste which is frightening for the environment due to the associated risk of toxic exposure.

As the amount of e-waste production is projected to be 4.6 million metric tons by 2035, the e-waste management industry has huge potential to become a billion-dollar industry within a regulatory framework.[4] To make this happen, immense policy support remains a precondition.

Formalizing E-waste Disposal: As e-waste is different from general waste, a formal collection system should be modeled to handle e-waste separately from municipal solid waste. A supply chain channel creation is imperative to collect e-waste from the remotest part of the country and help in checking indiscriminate dumping.

Monitoring Ship-breaking Industry: Due to inadequate legal bindings, highly polluted scrap ships are imported in Bangladesh. Legal regulations should be strictly enforced to monitor imports. Central Effluent Plan should be established for managing the e-waste produced throughout the ship-breaking process.

Regulating ICT Industry: As the establishment of high-tech parks is an ongoing project to turn Bangladesh into ‘Digital Economy’, it should be ensured that these parks have a proper e-waste management system from the very beginning.

Alongside recycling the e-waste, reducing the repeated consumption of consumer electronics through creating awareness needs to be emphasized. In an era where technology is advancing at an unprecedented rate, the swelling e-waste should be given the similar level of attention as one of the most pressing environmental issues like plastic pollution through the development of a formal e-waste management system.