With the global focus towards sustainability and the achievement of Sustainable Development Goals, there has been a consequent limelight cast on the prospects of renewable and clean energy generation. Solar Power has taken somewhat of a vanguard role for such power generation plans in Bangladesh, and is expected to be a major driver of the Government’s goal of providing uninterrupted electricity to all by 2021 through generation of 24,000 MW (10% owing to renewables).[1]

The Sun is Far from the Zenith

The global focus towards renewable energy poses the choice of which source to focus on for viable and reliable power generation relative to the needs of the populace.

In the case of Solar Power, the power generation process involves the use of what is known as Photovoltaic (PV) Power cells. The function of these, is to directly convert sunlight into electricity via non-reflective panels, which can be placed in suitable locations outdoors with high exposure to the sun. The relative ease of PV adoption in the modern day has led to significant growth in the field of solar power.

Solar Energy, particularly through Photovoltaics, seem at present to be the renewable energy source with the greatest average growth rate sustained over the last few years.

The International Energy Agency reported in 2016 that PV electricity generation globally had been 303 gigawatts, which equates to 1.8% of estimated world demand of electricity. Much of this generation was owed to growth in the PV markets in China, India and the U.S. In retrospect, the generation from installed PVs in the year 2000, was only 170 megawatts, this means a nearly 1,800 times growth.[2] This goes to show that growth has been exponential despite being concentrated within a few major markets. There is hope for a positive technological spillover that will see more extensive market development in Lower Middle Income Countries as well.

The most recent reports as of 2018, shows a 97GW global capacity growth through installations of PV-s, which accounted for almost half of renewable capacity growth from all sources. The year also saw an excess of 2% of world electricity demand met through solar energy alone.[3] 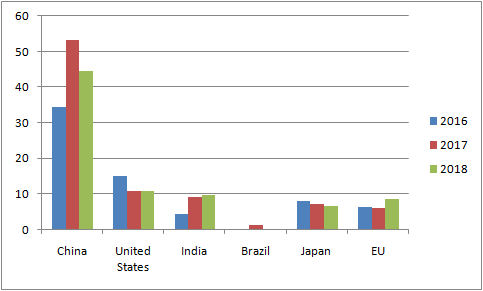 The Need for Solar energy in Bangladesh

Solar Energy can be harnessed and utilized via both on-grid and off-grid sources and mediums.

On-grid sources for Solar Energy generation include Solar PV (Photovoltaics)-s through implementation of large-scale Solar Parks, distributed rooftop generation etc. Off-grid sources have arguably been more in-focus in the context of Bangladesh, and include Solar Home Systems (SHS) which already provide lighting for a significant proportion of the population based in rural areas, estimated at around 13%.[5]

Bangladesh is currently generating 338.65MW of electricity from Solar Power. While this is a significant proportion (59.14%) of total renewable energy generation of 572.63MW, it is not an optimistic figure in terms of the government target of generating 2,896MW by 2021, [6] despite valiant strides forward such as the commencement in operation of the recent solar plant in Teknaf by Technaf Solartech Energy Ltd (TSEL) dubbed at the time as the largest of its kind and with an expected generation of 20MW during the daytime.[7]

Bangladesh is one of the largest users of Solar Home Systems and has around 5.5 million units in use to supply electricity to rural households. A large proportion of these units is supplied through the Infrastructure Development Company Limited (IDCOL) through a joint programme with the government.[5]

A Market Analysis Report by the International Finance Corporation, simplifies the main operation of IDCOL’s SHS Program as follows:

Where We Fall Short

1. Lack of Private Incentive: There exists a considerable gap in the dissemination of information about project viability, risk, and return for private investors. Because of this, there is a lack of incentive that slows down renewable generation growth. Credit ratings for such projects are not as high as those in India, for example.[10] Domestic financial institutions and commercial banks are not sufficiently equipped for large scale infrastructure financing.

2. Land Requirements: As Bangladesh already faces the prevalent problem of overpopulation, there is a considerable lack of viable land required for large scale solar projects. Most of the viable land is government-owned and this further discourages private investors. SREDA’s current renewable energy development plan states that solar parks are to only be built on non-agricultural, government-owned land.[11] In addition to this, viable land also is under risk of environmental shocks due to Bangladesh’s vulnerability to natural disasters and flooding.

3. Deficiencies in Grid Infrastructure: Despite having generation capacity, actual generation and distribution is often hindered by process-loss and underdeveloped grid infrastructure.

Better Private Incentives: With the potential that solar energy has in Bangladesh, it is imperative for sound policy frameworks to be in place in order to extract the greatest benefits out of private investors and the private power-generation ecosystem. These may include mandates to produce a certain proportion of their total generation through renewable sources, lowering the prevalent tariff on equipment which facilitates solar power generation, or provide tax exemptions and easier credit to investors in solar power.

Improved Data Collection: It is crucial to improve data collection and communication in terms of quicker viability reports, regular stage-by-stage progress reports, and efficiency reports for major solar plants and other projects. This would fast-track a number of proposed projects such as the 50MW Kaptai Lake project which is on hold until approval from the ADB fund arrives. [12] Also, it will lower the chances of the Government having to ax projects such as the proposed 200MW Solar Park in Teknaf, which was cancelled due to failures in timely delivery. [13]