The state of the Bangladeshi economy has been under increased scrutiny in recent times. The reasons include the due graduation from low-income to middle-income country status and the potential upcoming global recession that may dampen this progress.

The International Monetary Fund (IMF) does regular surveillance of its member countries’ economic and financial policies, as per Article IV of the Articles of Agreement – hence they are known as Article IV consultations. The most recent consultation with Bangladesh was concluded in September 2019, and the report published gave the perspective of the international organisations regarding Bangladesh’s economic climate.

The overall report hinted that while IMF’s estimates for GDP growth and inflation were more conservative than those of Bangladesh Bank’s, the country is headed for steady expansion through strong demographic and policy support. However, the weak banking sector is shaking this foundation, which is an issue that must be addressed with urgency.

Economic Outlook is Positive, But With Certain Threats

Projected growth for FY19 and FY20 are above 7.5%, in line with the economic growth trends of the past few years. Major contributors to this are exports from the robust readymade garments (RMG) sector, higher private consumption, and remittance inflows. Inflation is also stable, with some increase due to food price increases. 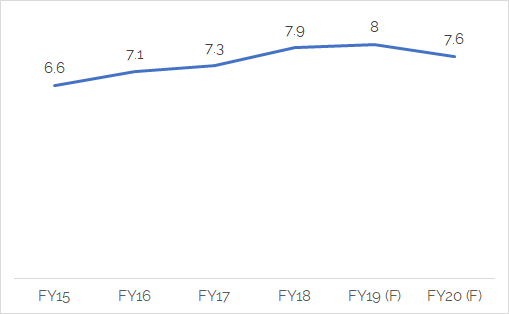 Moreover, poverty reduction has been a significant development, along with improving performance in the other Sustainable Development Goals (SDGs). Parallel improvements in the quality of life include higher life expectancy, lower child and maternal mortality rates, and improved food security. Infrastructural improvements, such as the construction of roads and the increased availability of energy, have improved rural economies and thus alleviated their poverty.

However, social tensions regarding the Rohingya refugee crisis have been mentioned as a threat to the economic stability of the country. There are over 700,000 Rohingyas in the country currently. While most funding needs have been met by donors and humanitarian aid, this may not continue to be the case perpetually. If aid is discontinued, the pressure will be placed on fiscal sources, the burden of which the government will struggle to pay without passing on to taxpayers.

Moreover, export diversification will be necessary to adjust to changing global patterns and not be left behind with overdependence on RMG. Potential alternatives include leather, shipbuilding, and agricultural products. Another key threat for Bangladesh is climate change and natural disasters, as its low, flat terrain makes it susceptible to such catastrophes.

Despite the positive outlook for the future performance of the Bangladeshi economy, the IMF has expressed concern about the state of the financial sector. In particular, the banking sector’s performance has been a cause of concern. A string of scandals and high rates of non-performing loans (NPLs) has put the sector in a liquidity crunch. The level of stressed advances, including NPLs and restructured or rescheduled loans, is at 20% of total funds loaned. The state-owned banks have been doing particularly poorly, with an NPL rate of 30% at the end of 2018.

While lending rates have been stable in this period, the government has been attempting to reduce it to single digits through appeals and persuasion. However, there are three reasons this has not been working effectively: high and rising NPLs, a need to reduce the advance-deposit ratio from 85% to 83.5%, and the negative impact of the issuance of savings certificates on bank deposits.

To alleviate the issue, recommendations have been made, such as a tighter framework for corporate governance and loan recovery, as well as an improved set of criteria to both lend and reschedule or restructure loans.

IMF’s report highlights, in particular, the need for Bangladesh to modernize its policies to match a transforming economy. Some aspects of the policy mentioned include the tax regime, investment incentives, and diversification. However, the most crucial message of the report is one that is evident to any observer of the Bangladeshi economy – the weakness of the financial sector.

To overcome this weakness, the Bangladesh government needs to respond with urgency. Starting with a comprehensive review of financial assets to analyze the actual performance of the market, the government needs to develop strict criteria for the adjustment of loan repayment, and internal control systems. Legal support needs to be provided to aid banks in dealing with defaulters. As the state-owned banks are the ones performing more poorly, their role in the financial sector and the economy at large must be revisited and revised.

A reform of the banking sector will strengthen it as lending will not be haphazard, and stricter regulation will also limit the extent of unethical practices such a bribery and corruption, which have also plagued the sector significantly.

It is crucial for authorities to realize that without a strong and reliable financial sector that incites confidence in entrepreneurs and investors, there is an impenetrable upper limit to the country’s growth. For Bangladesh to truly meet its aims of development, it must start addressing the many gaps and weak points it has that are preventing sustainable development.