by LightCastle Analytics Wing
May 1, 2019

The power of mobile phones in an emerging market like Bangladesh go far beyond bringing value added services and simple connectivity to people. According to GSMA and the World Bank, a 1% increase in mobile penetration can lead to an increase in GDP growth rate of 0.28% and for every new job in the Bangladeshi mobile sector, eleven new jobs are generated in the wider economy[4]. Socially, mobiles benefit the greater population through the exchange of information, improved access to healthcare, education, financial and agricultural information services4. And given the current trend in Bangladesh towards locally assembled mobile phones due to tax breaks from the government, achieving digitization and a transformation in the economy looks to be in progress.

The local handset industry is estimated to be $1.19 bn, of which 1/3rd is estimated to be illegally imported[1]. Imports of smartphones through legal channels declined after the government’s decision to increase import duties to 32% last year, encouraging smugglers to import through illegal channels, causing an overall decline in imports1. Smartphone imports declined 21% YOY to 6.48 mn in 20181. Feature phones import fell to 23.3 mn, down 11% from last year1. Around 2.3 mn handsets were assembled in Bangladesh last year and it’s estimated that around 40% and 18-19% of handsets are 3G and 4G enabled[1]. 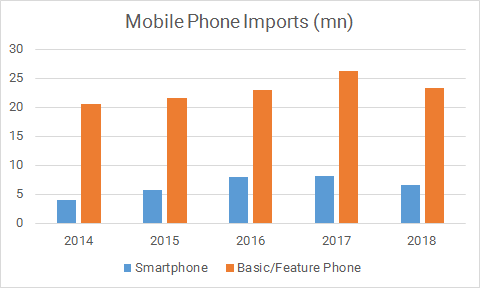 Currently, the majority of demand for smartphones is driven in cities, with a large portion of the market left untapped due issues with affordability, access to the internet and a lack of value adding digital services being unavailable to the greater population such as food delivery and ride sharing are to people in major cities. This has led to a great portion of the market retaining feature phones. However, the average price of smartphones have drastically fallen from $168 in 2012 to $130 in 20175. Some industry players have also started targeting the under $50 segment to tap into the greater population, the majority for whom average prices are beyond their means. Increasing local assembly also boasts superior quality with less defects seen present than imports in the past, and with tax breaks and an increasing number of competitors entering the market, this places a downward pressure on the price point of lower-end smartphones.

According to a GSMA report, Bangladesh is set to be a smartphone superpower by 2025, ranking 10th in the world with respect to the greater number of smartphone connections, up 11 spots from 2018. By 2025, smartphone adoption is also said to reach 75%, up from 31% in 2017 driven by greater affordability and an increase in the availability of mobile broadband services[5].

Bangladesh has a 32% handset import duty against 18% and 13% for locally assembled and manufactured handsets respectively which pushed foreign brands to setting up local plants in Bangladesh[2]. It’s estimated that around 2.385 mn phones were assembled in 2018 by 5 brands (and 5 plants) of which around half are smartphones[2]. 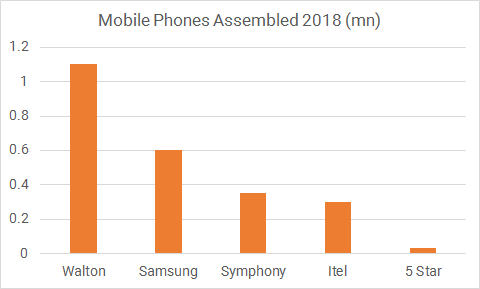 At the moment there is a there is a 32% handset import against 18% and 13% for local assembling and manufacturing respectively[2]. Walton was the first brand to start assembly in late 2017, and fully stopped importing handsets from China in July 20182. Coming at a close second in assembly are Samsung handsets which began assembly from the 3rd quarter last year, and is targeted to increase assembly by 5-6 times of current production. In terms of value, Samsung has been the market leader in the country according to Bangladesh Mobile Phone Importers’ Association.

This year the total number of handset assembling plants grew to 8, with the entry of Ok Mobile, Grameen Distribution and Anira International.

Early this year, BTRC drafted directives for equipment identity register (EIR) and launched a IMEI mobile phone database to place a check on illegally imported mobile handsets. In the future it’s expected that BTRC will be able to remotely deactivate handsets as well, placing further checks in place for stolen/unregistered mobile phones. Crackdowns have also been made in local markets hosting illegal phones in the market and shop owners jailed, fined and illegally imported mobile phones seized. It’s estimated that there are around 30 mn illegal handsets in Bangladesh and if the new project is fully launched and implemented, it could make a huge dent in the number of illegal imports and stolen/lost handsets.

High Prospects for the Future

From forecasts of Bangladesh becoming the next smartphone superpower and one of the highest smartphone adoption rates in the world, Bangladesh holds a great potential in the handset market, especially given the wide untapped market in the greater areas. The country’s per capita income growth will further spearhead demand for smartphones in the coming years, as more first time users end up purchasing smartphones, while a significant number of feature phone users will be replacing their feature phones with smartphones.

If a greater number of value added services such as delivery services and online shopping becomes more popular outside the major cities in Bangladesh, it may spur further growth and adoption of smartphones in the market. BTRC’s crack down on illegal imports is also expected to have a positive effect on the market as it will mean current market players will have a new gap in demand to meet.

On-shore manufacturers of mobile phones will be the main beneficiaries of the steep increase in demand for hand-held devices. Protected by favorable import barriers, these manufacturers can quickly increase production with the aim to pass on benefits of economies of scale for securing a larger market share.