Onions are dear to the cuisine of the sub-continent, so a shocking rise of 658% over the past year in the price of local onions alarmed consumers and has become a hotly discussed topic for the entire nation [1]. The steep rise has been attributed to several causes, such as a lack of imports from India, consumer panic and rumour-mongering, and even an artificial shortage created for profits.

Although prices have been rising over the year due to spikes in demand caused by Eid-ul-Adha and lower Indian imports, the hike has been steepest over the past few months. Between July 2nd and October 31st, the price increased by over 400% [2]. 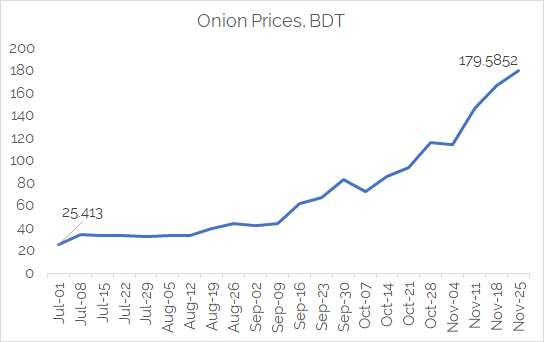 Ultimately, the shortage could have been prevented with some foresight from importers, who were overdependent on Indian imports, and authorities, who did not prepare accurate forecasts of demand and supply and thus did not hold sufficient stock. The crisis has highlighted several flaws in the local commodity market which must be addressed.

Indian onion farmers suffered at the hands of droughts in 2018 and a delayed monsoon in 2019. This was followed by damagingly heavy rains which lead to lower yields than most years. This led to a shortage, and the Indian onion market suffered its own onion crisis with prices rising by 47% [4].

As people started protesting the hikes, the Indian government took several initiatives. First, the initial 10% export incentives were removed, and a Minimum Export Price (MEP) was set at $850 per tonne. When even this failed to work, India, the largest exporter of onions, banned exports completely and instead imported onions from Egypt [8].

As Bangladesh imported over 550,000 tonnes of onions from India in the 2018-19 fiscal year, the sudden ban has crippled supply [2]. Imports from Myanmar have risen as a result, which previously constituted less than 1% of imports [6].

Local demand is 2.4 million tonnes annually, and local supply is 1.7 million [2]. This makes Bangladesh the 9th largest onion producer in the world [6]. The local harvest this year has been limited due to dry weather and a shorter monsoon than expected.

Although onion demand is high in the country, farmers face certain challenges in its production which is why it is a relatively less popular crop. Not only does onion yield fluctuate with poor weather conditions, but there is a lack of structural support. Irrigation for the crop is difficult for small-scale farmers to develop, and there is limited access to processing and cold storage facilities. Fluctuations in price and yield are also discouraging, for which no policy support is provided by the government. 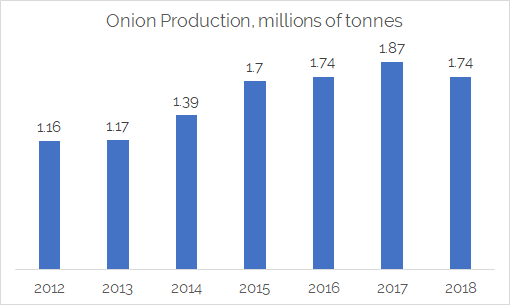 September to December is the time when local production is most limited and given that India’s onion crisis is not a recent development, the authorities’ short-sightedness may be one of the problems to blame for the historic price hikes [8].

Rumours and panic regarding price increases led to spiralling demand, which traders took advantage of through hourly price increases [5]. Consumers have suffered significantly under the anxiety caused by the dramatic rises in the price of the staple commodity. The price rises have cost consumers approximately $37.5 million just between July and October [2].

The price of other essential spices and vegetables has also been rising, with a Tk 40 increase in the price of garlic over the last week of November [3].

Salt, like onions, is a staple, and this was another market where consumer panic was evident. Prices reached Tk 100 per kilogram whereas the average tends to be under Tk 35 per kilogram, simply due to consumers buying larger amounts to stock up and attempt to be prepared for the potential price rises [6]. The government, however, guaranteed that salt stocks are sufficient to prevent price hikes.

The salt market’s situation shows how rumour-mongering and consumer reactions impact the prices, as traders attempt to take advantage of speculation. The spread of misinformation is also to blame for different prices in different locations.

Traders have been taking advantage of the market to fix prices at high amounts and limit supply so that prices continue to soar. Over 2,000 traders accused of illegal activities have been jailed and fined since the onion crisis began [7]. The National Security Intelligence (NSI) identified 29 businessmen and 16 importers who were accused of manipulating the market through hoarding and rumour-mongering 9.

The Trade Corporation of Bangladesh (TCB) deals with such shortages and crises in the food market. It has continued selling onions at Tk 45 at many outlets throughout the country, and 35 locations in Dhaka, allowing those unable to afford the inflated onions to get some relief [3].

The commerce minister has assured worried consumers that prices will stabilize and start falling once the market receives the supply of 12,000 tonnes of onion that were imported and reached the ports on November 29 [3]. Onions have been flown in from Myanmar, Turkey and Egypt.

Unfortunately, many may say that these measures are too little, too late, as consumers have already paid the costs. A preventive approach, as opposed to a reactionary approach, would have helped keep the market stable.

This is not the first time Bangladesh has suffered from an onion crisis, however. In 2013, a shortage caused prices to rise rapidly. Reasons were determined to be overdependence on imports from India and disincentives to local onion production caused by the subsequent price reduction from imports. The story has not changed significantly.

Ultimately, it is evident that the forces that caused the onion crisis did not develop suddenly or out of the blue. Limited global harvests due to dry weather caused the Indian onion crisis, which caused the Indian government to ultimately ban exports after several export restrictions were induced. The Bangladesh market was not prepared, without back-up import sources and stocks of onions. Restrictions on Indian exports are unlikely to be removed as an uneven distribution of monsoon rains will lead to poor harvests [4].

The main issues highlighted by the onion crisis are thus overdependence on the Indian market, volatility caused by consumer panic, lack of incentives for production, and a lack of foresight.

Overdependence on Indian imports is a weakness of the Bangladeshi commodity market that needs to be addressed with urgency, which can only be done by providing incentives for local production. Subsidies, fertilizers, guidance, and other resources will be needed to increase production capacity. This is also crucial for long-term sustainability.

Consumer panic can be addressed by identifying and eradicating sources of misinformation. Traders who attempt to inflate the market through rumours must also be identified, and this is a move that the government has focused on.

Going forth, it is crucial that authorities, importers, and traders be responsive to global trends and indications. While increasing production is a long-term concern, being wary of potential shortages and gaps and how they can be addressed with alternate sources is a short-term, and necessary, solution.