Milk is a great source of calcium and phosphorous required for healthy growth of bones and teeth, and an essential ingredient in growth and proper functioning of the body. For proper development, the recommended intake to meet a quarter of daily protein requirements is 200-250 ml of milk or 15-20g of milk powder (FAO report) 6. However, despite more than tripling production from FY08 to FY18, Bangladesh still faces a considerable deficiency in the market [1]. It’s estimated that by 2021, the country will face a 6 MMT shortage (World Bank report). Based on the recommended intake of milk, domestic production is only able to make up 62.6% of the needed supply.

Cattles are the major source (>90%) of milk in Bangladesh, however, buffalo and goats are used as well for dairy [2]. Given its nature as an agricultural product, the production of milk is strongly affected by natural elements in the environment of production, such as temperature, feed, and breed of cattle among others. The production of milk currently provides around 3.6 million households in Bangladesh with supplementary income, which are mainly operated in small/medium scales alongside other crop and off-farm activities [3]. This means the majority of dairy farmers rely on other sources of agricultural income. It’s estimated for every 100 liters of milk traded, 1.2-5.7 full time jobs are produced 6. Unlike other food products, however, milk is a fundamental ingredient to healthy development of the body that has almost negligible substitutes in the Bangladeshi market, making it a significant indicator of food security as well as economic growth of the country.

However, like many other food products in Bangladesh, it faces significant risks of adulteration in the local markets across the country reducing consumers’ confidence on producers and distributing brands. Recently, a report was published by the ex-director of Dhaka University’s Biomedical Research Centre, finding traces of antibiotics in samples of milk which sparked many negative reactions from the industry. However, past researches conducted indicate that speculative use of antibiotics is in fact a problem in the country.

Milk is highly perishable and can spoil within hours of production, and given Bangladesh’s subtropical monsoon climate, a significant portion of dairy products spoil before consumption due to inadequate cooling facilities [3]. At the moment, production of milk is being limited by three major factors: breeds of cattle used for production, lack of adequate cooling facilities in the supply chain, and poor operational practices. 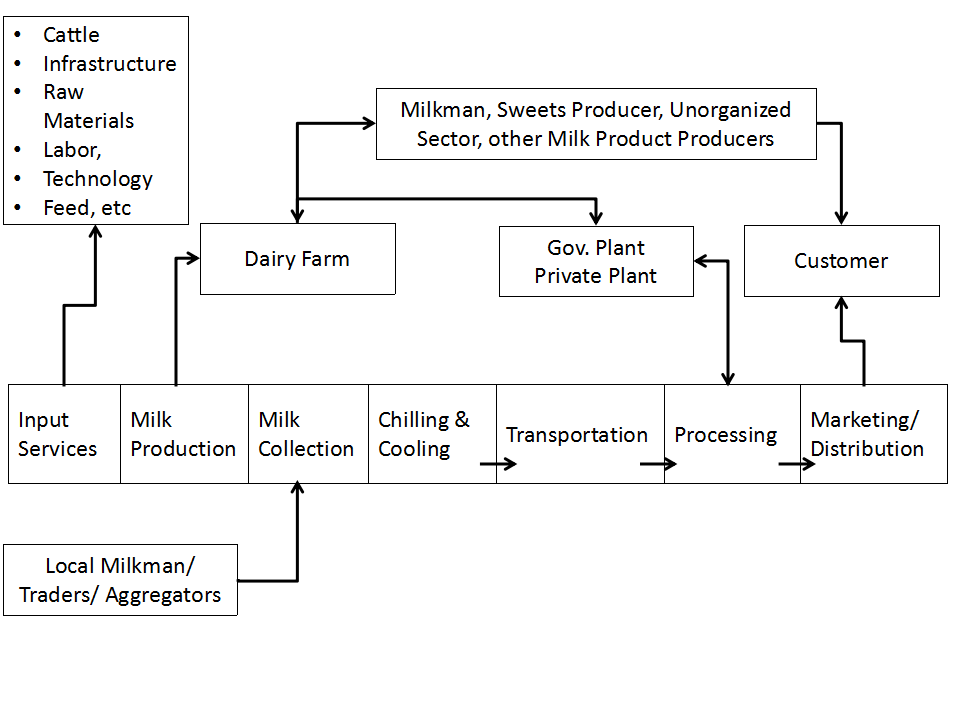 Due to increased rainfall during the monsoon season, production is usually on the decline due to less accessibility to grass and sufficient feed [3]. The price of milk sold by farmers also fluctuates considerably throughout the year (25-41 Tk/liter) and with quality on which price is fixed dependent on fat content, with higher content demanding greater prices [3]. As far as dairy cattle go, crossbred and foreign species have been found to produce at least 3 times the amount of indigenous breeds [2]. 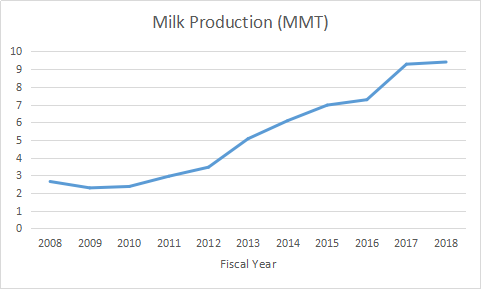 According to Hamid et al. (2017), around 85% of cattle in Bangladesh are indigenous in origin. Indigenous cows were found to produce around 1.9 liters of milk per day against crossbred cows producing 7.8 liters/day (Datta et al., 2017). Although production has more than tripled in the last decade, given that the majority of cattle are still local breeds, the industry is still far from achieving its full potential. Crossbred cattle can produce at the last 3 times that of local breeds, meaning if local producers, who account for the vast majority of production, change the type of cow they herd, they could bring production to a surplus and even possibly export milk to India, which has a great challenge in meeting local demand.

Adequate cooling facilities are required to keep milk and related dairy products preserved on transportation to processors and end consumers. However, a significant amount of milk is wasted due to a lack of chilling. This includes both chilling in bulk at local centers as well as refrigerated trucks and tankers. At the ground level, however, chilling equipment requires a considerable cost which most would be unable to bear. In this case, solar based chilling plants have shown considerable potential in chilling milk at the ground level, however, needs to be brought forth to farmers at the ground level [3].

Research conducted by Datta et al. (2017) showed that in a survey of 250 farms, larger farms tended to have greater margins, possibly indicating economies of scale leading to greater returns. Crossbred cattle also requires better feeds, mainly concentrates which are not available to the vast majority of farmers. This means the majority of those with crossbred cows are unable to fully reap the benefits of the breed.

A lack of storage facilities and planning also make the monsoon season a time of low production due to inaccessibility to grass and feed. If production is to increase in the future, it must be done with the ground level producers in mind i.e. small/medium scaled farms, which means more training facilities for farmers to enhance their skills in dairy farming.

Rising labor costs have placed considerable pressure on various labor intensive agricultural ventures such as harvesting crops to the extent of making certain crops loss bearing. But dairy farming is one of the most profitable livestock activities with considerable returns coming in from produced milk, dung (as an energy source), calves, and the cattle themselves. Considerable initial investments are required for raising dairy cattle with one study finding up to 70% of funds required to start as capital expenditures. A large majority of farmers start farms on their own capital, or through raising funds from local communities. Few take loans from banks or formal institutions due to high costs of loans and a fear of debt financing and interest payments. 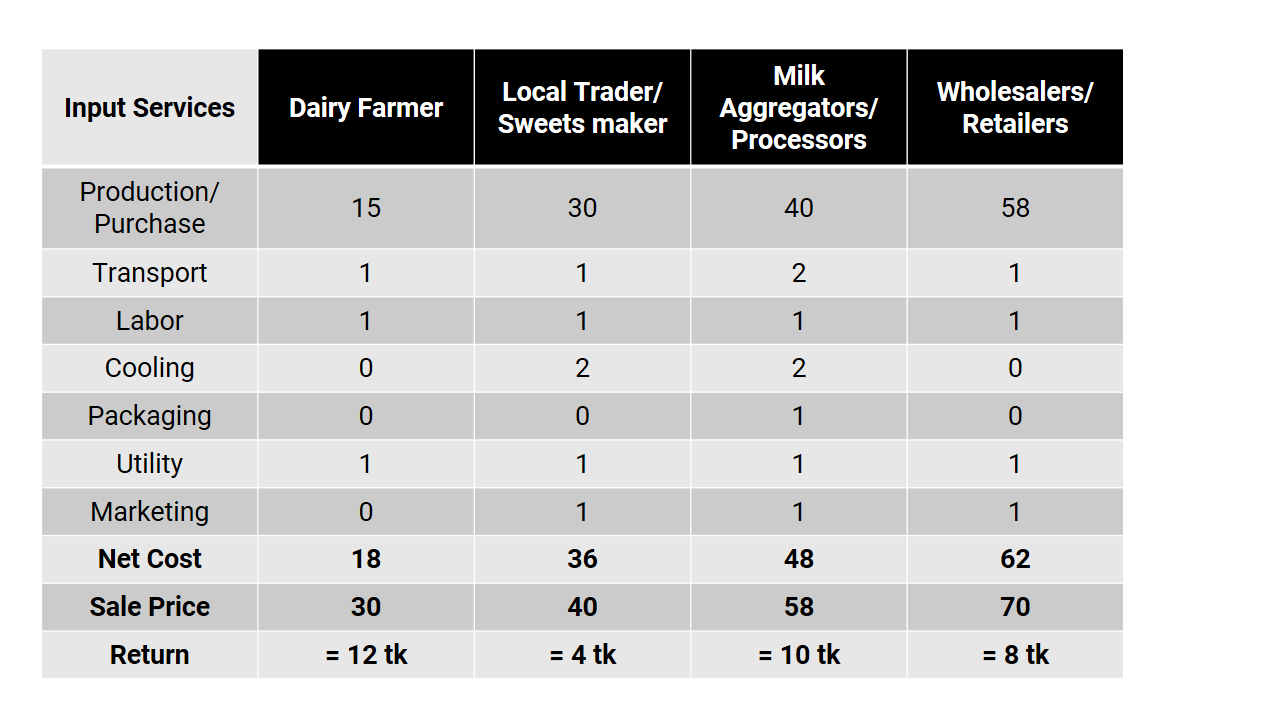 Although farms make the most profit per liter in the value chain, their small scale of business make their overall revenue the lowest in the supply chain. Moving down the supply chain to end consumers, the volume of milk traded significantly increases making traders and processing companies the ones who reap the most benefits. In comparison to other agricultural ventures, this means if properly executed with due diligence, dairy farming businesses are much more profitable with stable cash flows than other agricultural businesses.

The lack of adequate cooling facilities in Bangladesh for the transportation of milk make it the critical link in the value chain stumping production from reaching final consumers. The demand for electricity in Bangladesh is also facing a deficit making it an unreliable power source for those rural areas who may not have access to electricity, or face regular blackouts. Harnessing renewable energy sources such as solar, biogas, and other forms are key to integrating a proper cooling facility into the supply chain [3].

The use of crossbred cattle in the country must also be pushed to enable farmers to receive greater margins per dairy cattle. Crossbred cattle have been found in a vast majority of cases to provide at least 3 times the amount of indigenous species. Also, given that mechanized tools for agriculture is spreading as a more time and cost efficient alternative to draught power, it is crucial that cattle with greater milk yields and fat content are introduced and spread into the market to reduce the deficit in production against the recommended intake.

Care must also be taken to assess and combat the decline of consumer confidence in the local industry, which has pushed large enterprises to sourcing milk powder from abroad due to concerns about quality in the domestic markets. The main reason behind this is again due to low yields of milk per cow pushing producers to adulterate produced milk. Awareness campaigns on maintaining health of cattle is also needed to ensure that small/medium scaled farmers don’t overdose their cattle with antibiotics, as found in a recent study, in order to avoid the high costs of veterinary services.

Imports of powdered milk and dairy products add considerable costs and it’s estimated that the country imports more than 100,000 tons of powdered milk and dairy products, spending more than $237 mn (BBS and Bangladesh Bank Data). In implementing these solutions, raising awareness about these common issues and solutions needs to be properly target to those in rural and suburban areas where the majority of small and medium scale dairies reside.