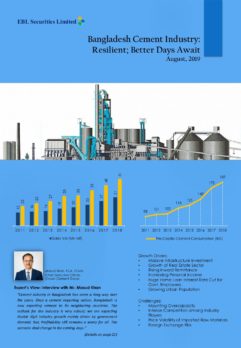 Bangladesh cement industry, one of the fastest growing cement markets in the world, grew at approximately 11.5% CAGR over the last seven years as demand doubled from 14.6 million MT per year to around 31.3 million MT per year. Per capita cement consumption in Bangladesh almost doubled from 95 KG in 2011 to 187 KG in 2018. Despite huge growth of the industry in last two decades, Bangladesh is still one of the lowest consumers of cement in the world.

Approximately 81% of the total market share is held by top ten manufacturers. By the end of 2018, local manufacturers had grabbed 86% of the market, a reversal in scenario from 15 years earlier. Once a cement importer, Bangladesh is now a cement exporting nation. Bangladesh exported cement worth US$12.59 million during FY17-18, compared to US$10.79 million earned in the year before representing 16.68% growth in export earnings YoY with India being the main destination for cement exports.

On the back of massive infrastructure investment by the government, rising remittance income, growing urban population and impressive GDP growth, cement demand is expected to grow at even higher than the historical rate.

Although self-sufficient in cement production, Bangladesh needs to import almost all of the raw materials used in cement manufacturing. Moreover, increased raw materials price and intense price war have squeezed the profit margin for cement manufacturers. Recent changes in tax laws, higher fuel & transportation cost and cost of fund have added more sufferings for the industry players. Hence, although the outlook for cement demand growth is very robust; profitability still remains a concern for all.

EBL Securities Ltd. (EBLSL) is one of the fastest growing full-service brokerage companies in Bangladesh and a fully owned subsidiary of Eastern Bank Limited. EBLSL is also one of the top five leading stock brokerage houses of the country.

COVID-19 Impact on The SME Sector of Bangladesh

COVID-19 Impact On The Startups of Bangladesh