The consumption of rice is a crucial part of the Bangladeshi identity – in both cultural and economic terms. It is not only the staple food of the country but also the source of employment for 48% of the rural population, as almost all of the 15 million farms in the country grow rice 1. Rice fields account for 70% of Bangladesh’s cropped area of 1.54 crore hectares [2]. It constitutes 70% of the agricultural GDP and one-sixth of the national income [1].

The market for rice is expected to grow at a CAGR of 4.1% [3]. However, the industry is characterized by fluctuating production and prices which impact food security, inflation, rural employment, and export-import patterns. Fears of stagnation of the industry despite the high dependence of rural development are creating concerns. These issues need to be addressed by the government with policies to protect both farmers and consumers. 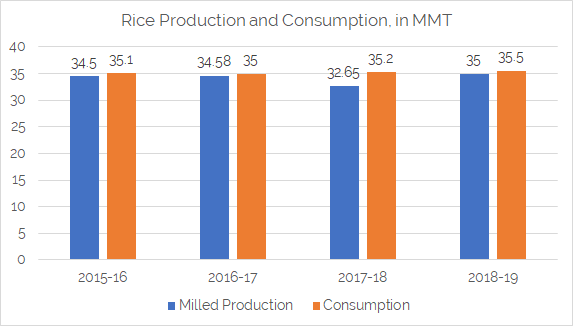 Global Market for Rice is Stagnating

Rice’s importance is high in countries where it is culturally a staple food, such as those located in Asia and Africa. Globally, the expected CAGR is low at 0.88% [4]. Estimated production on a milled basis is 500 million tonnes in 2019. Asia dominates as the top producing continent with India and China producing over 52% of the total rice in the world together [5].

In the past few decades, Bangladesh’s rice market has shifted from being a close, highly regulated market to one more open to international trade. Bangladesh is the fourth largest rice producer in the world [5]. However, fluctuating crop sizes lead to fluctuating levels of imports and exports. India accounts for 24% of global rice exports and is Bangladesh’s main importer for rice [4].

A Second Green Revolution is Needed

Rice can be divided into two types: regular rice and aromatic rice. The main variants of rice grown in Bangladesh are ‘Boro’,  ‘Aus’, and ‘Aman’ and are grown in different seasons throughout the year. 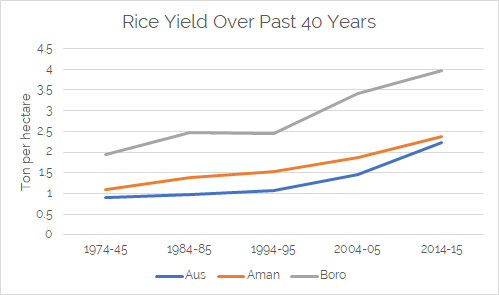 The first Green Revolution, beginning in the 1970s, greatly impacted the production of rice by tripling it in three decades [1]. It also impacted food security and employment. The government’s goal was to make Bangladesh’s rice production self-sufficient by popularizing newly developed high-yield varieties and seed-fertilizer-water based technology. Training programs and incentives were provided to promote the transition. Modern irrigation techniques allowed dry season crops to flourish.

As the country’s needs change, the impact of rice on the economy is shrinking. As a result, new objectives must be set in accordance with trends. The future of all agricultural products stands to be heavily affected by climate change. Although over 110 varieties of rice have been developed, farmers continue to grow two main varieties [2]. The development of drought-tolerant, high-yield and quickly harvested varieties of rice may help mitigate the risk to food security. Moreover, high-quality pesticides and fertilizers must be provided to small-scale farmers. Fluctuations in production can be caused by weather and flash floods. For the regions that are susceptible to erratic weather, varieties with short gestation periods have been successful.

Rice has a Crucial Role to Play in Development

Seventy-seven percent of small farmers depend on the production and sale of rice for their food security and livelihood [1]. As a result, the industry’s size and growth have a direct impact on poverty alleviation. In terms of food security, two-thirds of the country’s caloric needs are met by rice [1].

Stability in the rice industry reduces dependence on food aid and imports and also keeps real prices and wages balanced. Cheap and easy access to food is crucial for poverty mitigation. As a result, the government maintains a large reserve stock of up to 1.5 million tonnes of rice in case of emergencies or unexpected shortages [1]. Local farmers are easily impacted by changes in price. Abrupt fluctuations in rice supply affect the revenue farmers earn and the demand for their produce, as imports from neighbouring India may be cheaper.

Being the staple food of Bangladesh, rice is supported by a strong base demand. This demand is boosted by two factors: a rising population and rising incomes. As incomes rise, people can afford to eat more rice. Despite this, real prices of rice have been falling consistently due to high harvests and stocks [8]. Gains in productivity are keeping the crop profitable, but require continuous development. Given the role of rice in development issues, price trends of the crop are of national interest. High rice prices benefit the rural farmers who depend on it for their livelihood, and low rice prices benefit the impoverished who depend on it for their daily nutrition.

The recent budget has reduced the government’s contribution to the agriculture sector to 5.42%, down from 5.7% in the previous year [2]. Although the sector is slow to grow compared to the manufacturing and services sector, it has the highest rate of employment, which is why higher government priority is necessary.

Price support policies, such as setting minimum prices, would protect the earnings of farmers in years of large harvests. Crop insurance policies have also been recommended. For increased price stability, the West Bengal state government’s policies can be considered as a successful case. The paddy is procured directly from the farmers by the government and then stored in warehouses before being processed by privately-owned rice mills. Farmers are paid within 72 hours of procurement [7]. Setting prices in advance would allow better planning and land allocation by farmers, making the supply more stable.

The government must continue research into more high-yield varieties of rice, as well as incentivize farmers to actually grow such varieties. Although price support is considered the main strategy to protect farmers from fluctuations, accessible and interest-free loans will also help prevent exploitation by buyers.

While the government was focused on the imports of cheap rice in the past to supply to low-income populations, the new target is to export over 1 million tons of rice. However, while most international demand is for par-boiled and sticky rice, 95% of Bangladesh’s production is hard-grained rice. Moreover, the 50,000 tonnes of fragrant rice exported annually are consumed by expatriate Bangladeshis [8]. In order to boost exports, an export incentive of 20% has been announced. Imports have been disincentivized by raising tariffs from 2% in 2017 to 28% in 2018 [6]. It will be crucial to monitor exports to ensure that there is no shortage in local rice supply, as such a shortage would need to be mitigated using imports.

As the country grows, the role rice plays will shrink. Other industries are taking the spotlight and contributing more to the GDP. However, the reason rice is a strategic industry has more to do with than its contribution to GDP. It directly impacts food security, poverty, and rural development.

Although the focus is shifting to rice exports, without stable prices and production, it will be difficult for Bangladesh to compete with the likes of India, which dominates the market for rice exports. Moreover, a surplus is not sufficient to ensure exports – the rice must be of high quality as well.

The priority for the government must be creating a value chain that protects the interests of farmers as well as consumers, such as that employed in West Bengal. Direct procurement allows steady income for farmers while also providing a steady supply to private mill owners. This stability will be crucial for the industry as it becomes more export-oriented. The liberalization of the market to international trade will keep the market competitive, but tariffs are necessary to continue protecting the domestic market and prices. There are concerns that rice production will stagnate in the future due to a lack of investment, which must be met with supply-side policies, such as training and subsidies. So far, Bangladesh has been a pioneer in introducing genetically modified crops with protests from neither farmers nor consumers, and this may prove to be a key advantage in the global arena.