Bangladesh’s shrimp exports, which once contributed $590 mn in FY12, has been on the decline, falling 8.37% to $408 mn in FY181 as the demand for black tiger and freshwater prawns have gone down due Vannamei shrimp (which is not grown in Bangladesh) dominating the world market at a lower price point. This drop in demand has led to local exporters to drop their prices from $8.70/lbs to $6/lb. However, the country has seen an unexpected silver lining as strong domestic demand offering higher prices than the international market has made up for the drop in exports. 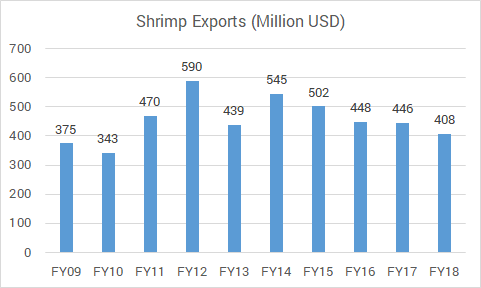 Currently 833,000 farmers grow black tiger shrimp (bagda) and giant freshwater prawns (galda) on 275,000 hectares of land concentrated in the southwestern coastal districts in the country [1]. In FY18, volume of shrimp exports fell 9% to 36,167 tons, the lowest point since FY02. Demand for shrimp exports from Bangladesh peaked in FY12, but since then has been on the decline. Despite this, the department of fisheries has set ambitious goals to reach $1.25 bn in frozen shrimp, fish and value added fish products by 2020.

Recently Bangladesh Shrimp and Fish Foundation (BSFF) has signed an MoU with Hendrix Genetics Aquaculture BV to transfer knowledge for the purpose of boosting production of the black tiger shrimp, which is mainly exported to the European market with $89.82 mn shipped to the Netherlands alone in FY18.

The global shrimp market at the end of 2017 is estimated to be $39 bn, and forecast to grow to $67 bn by the end of 2027 at CAGR of 5.6% [4]. In volume, this amounts to 9,119 KT in 2017 and forecast to 14,259 KT by end of 2027 with CAGR of 4.6% [4]. Globally, demand is being driven by a shift in consumer eating habits as they are turning to alternative sources of protein such as seafood like shrimp, salmon, and tuna. In emerging economies, a growing urban population and  favorable governing regulations in setting up food-processing plants is driving demand for seafood and contributing to growth in the shrimp market. The majority of shrimp traded is produced via aquaculture.

In April 2018, prices of Vannamei declined to record lows due to unexpected large harvests resulting in increased imports around the world, and growth in demand in the first 6 months of 2018.

At the moment, 35-40% of the total global market share is held by multinationals that provide a wide variety of shrimp-based products in the seafood market [4]. North America and Western Europe is viewed as key regions due to an increasing per capita of shrimps. Regional and local players account for 30-35% and 25-30% respectively, and are mainly operating and targeting the Asia Pacific [4].

According to a report by Conxemar, price is likely to be a major factor in the production of shrimp for 2019, as shrimp is priced based on its size. Currently developments in aquaculture have been leading to larger sized shrimps and better growth rates, increasing profitability of those in the sector. Shrimp’s commodity cycle also is a significant factor in production growth at the moment. However, there are concerns shrimp diseases, particularly SHIV, which causes high mortality rates and have been detected in China and some parts of Vietnam, with regular diseases affecting the Indian market.

Given Bangladesh’s troubles with pollution, diseases may prove to be a considerable risk factor in the large scale production of shrimp. In the past, shrimps were also pumped with silicone to increase their weight which has negatively impacted consumption in the domestic market. If Bangladesh is able to raise its production efficiency through better use of technology, ensure biosecurity and timely harvesting according to the commodity cycle, it may be able to recapture its declining market share in the global markets.