Carried on the back of its competitive apparel industry and large pool of migrant remittances, Bangladesh’s strong and admirable growth in recent years is the product of multiple factors. However, behind this picture lies another story not talked about nearly as much–the role of education in enabling this transformation.

As the economy matures, the engines of growth take on more complex forms. With Vision 2041 looming ahead, the need to equip the nation with a strong information technology-enabled services industries remains pertinent. Despite being the foundation for future growth, the sector is currently falling short of expectations. In order to enable this sector to thrive and produce the results needed from it, access to quality tertiary education is vital in creating future industry leaders. 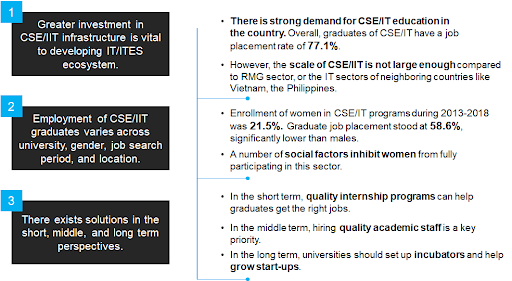 The ADB tracer study defined job placement rates as the number of people currently employed out of the total sample.

The tracer study defined job placement rate as the proportion of people currently employed out of the total sample.

Job placement after CSE/IIT graduation was 77.1% with large variations across universities. 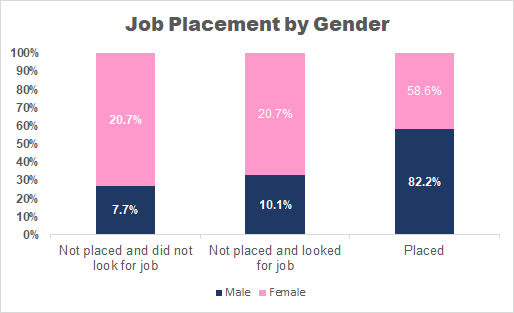 Job placement amongst female CSE/IIT graduates was lower than that of men. This suggests that there exists stark gender disparities within the IT/ITES industry. According to the Bangladesh Institute of Development Studies (BIDS), the overall employment rate for women was 18.4 percent lower than that of males. This gap arises out of women’s family commitments which include being a homemaker, and their inability to travel abroad. Employers were also concerned about security reasons when considering the employment females. Working location, family constraints, lack of proper professional and vocational skills, maternity leave, high turnover rates, reluctances to take on challenges, and absenteeism were also major factors in the decision-making process for employers. 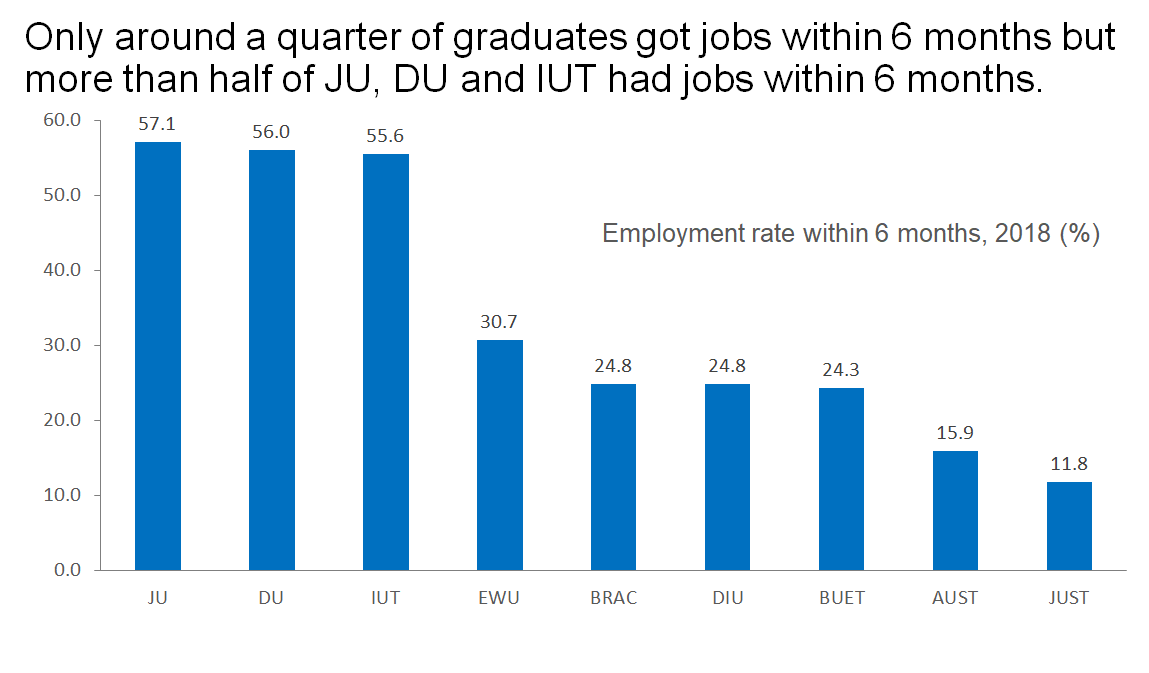 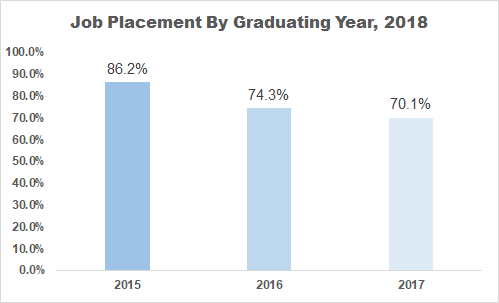 Job placement rates increase as more time elapses since the day of graduation. As of 2018, graduates who graduated in 2015 experienced a job placement rate of 86.2 percent, while those from the years 2016 and 2017 experienced lower job placement rates of 74.3 percent and 70.1 percent respectively. In 2017, 13.8 percent of employers indicated that first-time job-seekers coming from university were not well-prepared for the job they were applying to. 62.0 percent of employers stated that fresh graduates lacked the appropriate job-specific skills and competencies. Additionally, only a quarter of graduates found employment within 6 months of graduation.

Interest in CSE/IT, Scholarship Opportunities, and Salary Affected Access to Education and Employment

There are multiple reasons as to why access to education and employment in CSE/IT sector differed. Among them, 3 important factors were:

Most graduates were engaged due to their interest in CSE. 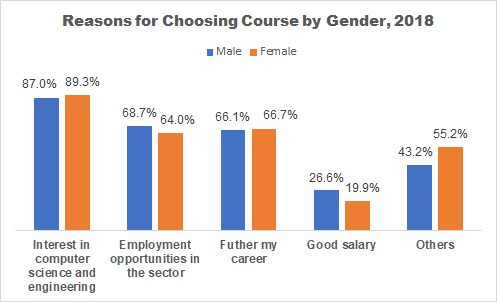 Graduates in CSE/IT were primarily engaged in the discipline due to their genuine interest in the field. In addition to this interest, they also believed that there existed good employment opportunities in this sector. With prospects of career advancement, the potential to earn a good salary also featured amongst graduates’ reasons for choosing their courses.

65.3% of universities offered no scholarship opportunities. 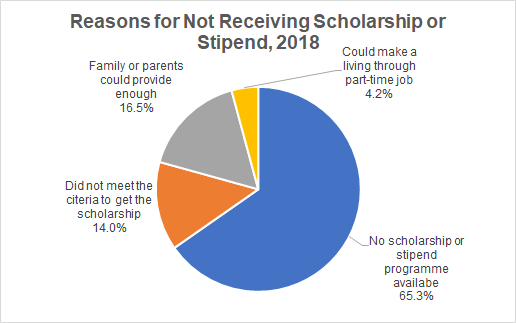 69.8% of unemployed graduates cited “low salary” as the chief reason for not accepting a job offer. 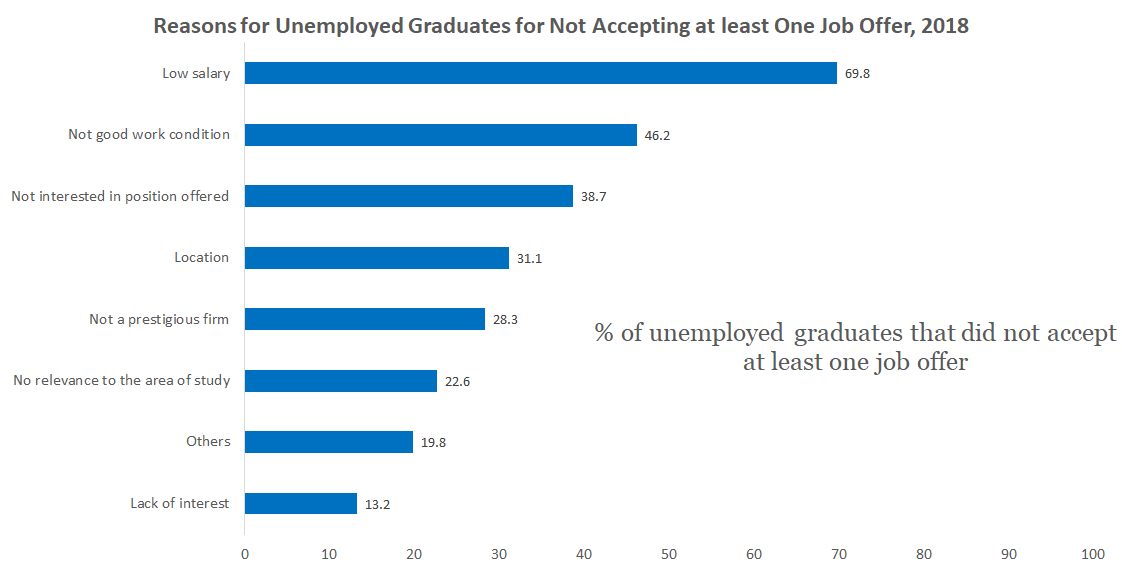 The Internet was the Most Popular Job Search Method

The vast majority of graduate job-seekers look for employment on online job-matching sites (36.7 percent). The problem with this approach is that most employers don’t rely much on the internet for recruitment purposes. Most employers in the IT sector use private employment services and job fairs to recruit employees. 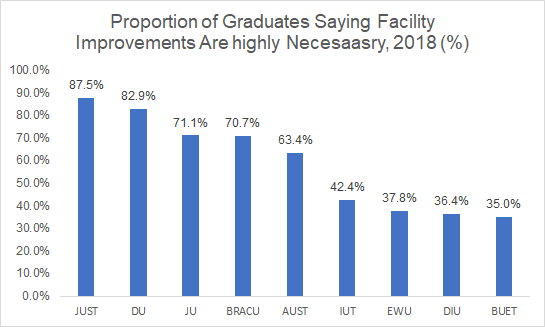 Generally, most graduates were satisfied with the quality of education they received at their respective universities, however, they believed that the education needed to be adjusted to teach a more proper level of hands-on skills for the job market. Room for improvement still exists and according to the study, most graduates believe their universities needed to improve their facilities. 87.5 percent of Jessore University of Science and Technology graduates,  82.9 percent Dhaka University graduates and 71.1 percent of Jahangirnagar University graduates believed there was a strong need to improve university facilities.

The use of ICT (51.1 percent) and problem-solving skills (49.6 percent) rank top on the list that graduates believe universities need to focus more on. Among graduates of the universities surveyed, most respondents believed that soft skill training needed to be improved. 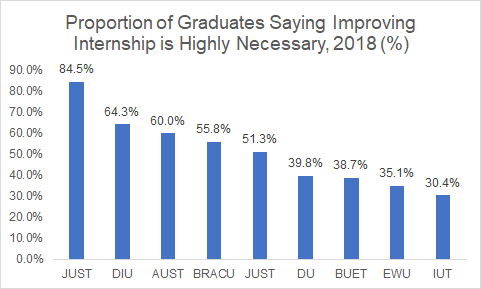 The proper development of the IT sector is a fundamental ingredient in the recipe for Bangladesh’s future. The sector’s growing importance backed on the heels of equitable and quality-oriented CSE/IIT university education will enable Bangladesh to lay the foundation to power the future engines of economic growth. Improving industry infrastructure, smoothing discrepancies over access to education and employment across gender, university and year of graduation, and developing a market-responsive and skills-oriented curriculum will establish the foundation to empower the IT sector’s growing relevance in the local economy.

Particularly crucial steps towards success revolves around 3 actions. Firstly, access to CSE/IT programs needs to be expanded, particularly towards women to bridge gender disparities. Secondly, the quality and relevance of CSE/IT programs need to be upgraded through greater hands-on experience, more practice, improved career guidance and quality internship programs. Third and lastly, universities need to strengthen support for start-ups in an effort to raise the number of high tech entrepreneurs.

If these fundamentals are tackled swiftly, it is appropriate to hope that Bangladesh will be well-poised to deal with the challenges of a more complex and technologically-oriented global economy. The task then falls to the hands of university authorities, employers, and policymakers to synthesize the way forward.