Bangladesh economy has arrived at the cusp of achieving the middle-income status with a number of indicators matching the graduation requirements. This has been possible due to steady macroeconomic performance led by an impressive growth trajectory. Good performance is reﬂected in the form of steady sovereign ratings (Moody’s, S&P and Fitch) and growing forex reserves (USD 33 billion, May 18). However, a number of fault lines have emerged that may potentially derail future growth.

Persistent GDP growth above 6.5% over the last 3 years has not translated into in higher job creation within the economy, confounding policymakers. Although the country’s GDP growth remains positive compared to regional peers, the actual base value remains low.

Alongside, the country’s overreliance on apparel export for earning a major chunk of export earnings may prove detrimental-amid the onslaught of the fourth industrial revolution, carrying the possibility to automate a signiﬁcant number of factory jobs. The ailing banking industry casts a shadow on the investment climate by disrupting credit ﬂow across the economy. Fear of potential political turmoil, leading up to the national election, looks likely as well – dampening spirits of potential domestic and international investors. GDP growth is expected to be maintained, with oﬃcial government ﬁgures predicting growth to hover around 7.2%, while ADB and WB expect growth to remain around 7% and 6.5%, respectively. Despite the apparent diﬀerences, all sources are bullish on the country’s growth prospects in 2018-19. Although Bangladesh’s GDP per capita has been on a constant rise, it is lower in value compared to neighboring countries like Sri Lanka, Vietnam and Pakistan. In 2016, while Bangladesh held a GDP per capita value of around USD 1,359, Vietnam was at USD 2,171 and Sri Lanka was at USD 3,835 according to World Bank statistics. FIGURE: Comparative GDP Growth of Bangladesh and its neighboring countries.

Bangladesh’s export basket is skewed towards Apparel and Textiles with few other exportable items like Jute, Pharmaceuticals and Frozen Food. In terms of service, remittances is one of the key foreign currency earners. Over the last couple of years, apparel exports have begun to plateau. Growth outlook is also not upbeat this year as manufacturers face a squeeze in unit pricing. The country is putting eﬀorts to diversify the export basket, by introducing diﬀerent products, and stressing on more value added Light Engineering, Agro Processing and ICT services.

Remittance, which contributes roughly USD 14.5 billion, has declined as a knock on to deteriorating international oil price, adversely impacting economies of labor importing Gulf Cooperation Council (GCC). Remittance for 2016-17 had dipped below USD 14 billion mark, but growth is expected to rebound in 2017-18 due to expected growth in international oil prices.

The FDI to GDP ratio portrays a more contextual picture, where it is seen that Vietnam and Myanmar’s FDI inﬂow is much higher against GDP growth compared to Bangladesh. These countries are receptive of higher FDI which is contributory to economic growth. 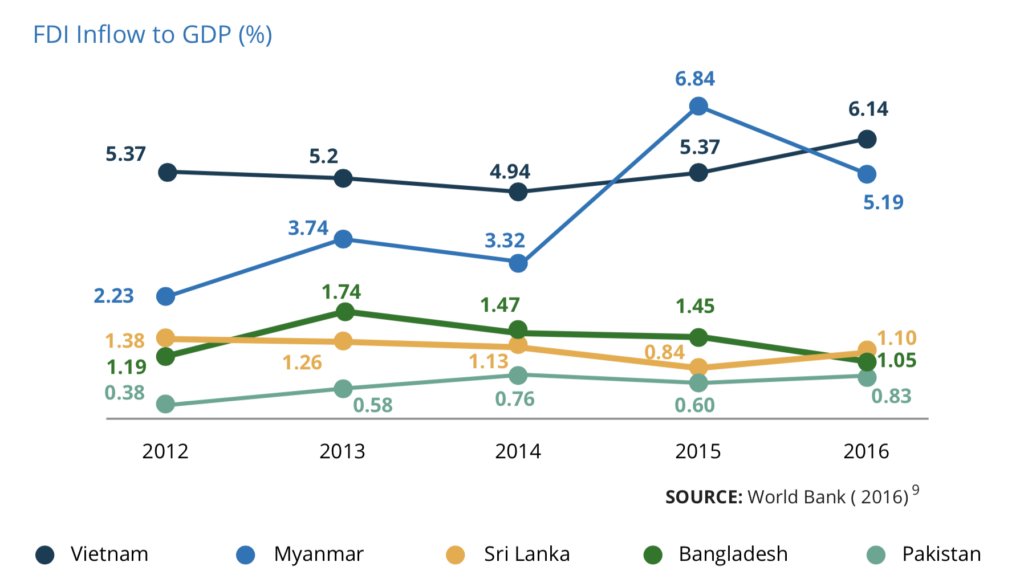 FIGURE: Comparative FDI to GDP Ratio of Bangladesh and its neighboring countries.

In 2016, Bangladesh and China signed 27 MOUs, with an estimated budget of USD 24 billion during Chinese President Xi Jinping’s visit to Dhaka. The projects included infrastructure development like roads and highways, port facility development, power plants among others. Bangladesh will partner with China for implementing the ‘One Belt, One Road’ initiative, conceptualized to boost trade through transport linkage between Asia and Europe. In 2017, USD 4.5 billion credit line was oﬀered by the Indian government to Bangladesh for infrastructure development.

Although some of these signs are encouraging, there are impending fault lines in the economy which need to be meticulously navigated in order to make the successful transition into a middle income nation. Rising inequality, slumping RMG export, precariously balanced banking industry are just some of the looming indicators of an economy in need of a closer inspection.

According to the HIES 2016, income inequality in the urban areas has risen faster than in the rural areas. This is highly attributable to the asymmetrical growth of jobs in the services sector and concurrent fall in the growth of blue collar jobs, especially in the urban areas. Although the economy has achieved commendable growth, it has done so without creating new jobs. Bangladesh’s apparel sector has been growing at a signiﬁcant pace over the last couple of decades, securing its position as the second largest player in the global apparel market. According to the Export Promotion Bureau (EPB), currently the sector is exporting USD 34.83 billion worth of apparel as of FY2016-17. In the recent past, China has been plagued by rising labor costs and more recently by economic slowdown. According to the EPB, apparel shipments, which typically account for more than 81% of Bangladesh’s total export receipts, raked in USD 2.88 billion in January 2018, up 6.67% from the same period in 2017. Where regional players have strongly focused on diversifying their export baskets, Bangladesh is lagging behind. Over the last 16 years, Bangladesh’s export basket has shifted more towards apparel with shrinking export from other sectors.

Bangladesh’s banking sector has been in free-fall due to rising non-performing loans from both state and private banks alike. According to Bangladesh Bank, the total NPL combined from the 8 state-owned, 40 privately owned and 9 foreign banks stood at BDT 803.97 billion as of September 2017. This is in total 10.67% of all outstanding loans and 4% of the country’s GDP. If restructured and rescheduled loans are taken into consideration, the total outstanding loan reaches around 17% of total all outstanding loans. State banks historically have performed worse than the private banks with state owned banks carrying 55% of the total NPL as of 2017, approximately BDT 441.26 billion. The banks combined also had a capital shortfall of BDT 126.83 billion by June, 2017. The ﬁnance ministry proposed to reduce the cash reserve requirement (CRR) by one percentage point to 5.5%, which the Bangladesh Bank carried out in April, 2018, to mitigate the ongoing liquidity crisis in the banks. 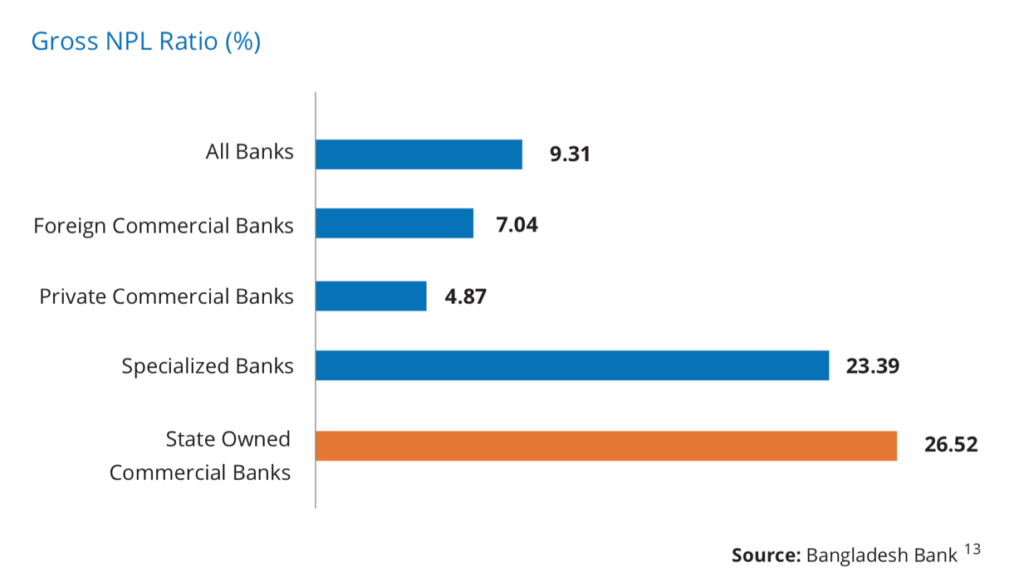 Bangladesh has a history of experiencing political turmoil during the election year, especially over the last two terms. Since the 2014 election, which brought the incumbent Bangladesh Awami League (BAL) to power for a second consecutive term, relationship has failed with the major opposition parties. The situation may further exacerbate in the latter half of 2018, especially if the main opposition, Bangladesh Nationalist Party (BNP), chooses to boycott the elections. Experts predict protests to be more subdued compared to 2013-15, as the opposition’s ﬁeld strength has somewhat weakened over the last 3-4 years and the party’s chairman has been incarcerated on corruption charges.

Bangladesh stands at a crossroad for joining the league of growing economies. Although the country has been achieving commendable economic growth, there are a number of pitfalls which can easily derail the economy by stunting future progress. As the government undertakes a more aggressive strategy for attracting foreign investments, potential investors would seek to further assess the economic fundamentals for a frontier market like Bangladesh. 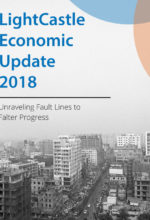