While developing economies shift their focus from Agriculture towards manufacturing and service oriented sectors, the Agricultural sector in Bangladesh is distinguishably salient in terms of how much employment it generates. It is a primary source of livelihood for much of the population, holding approximately 39% of total employment and contributing about 13.07% of total GDP as of 2019 [1] 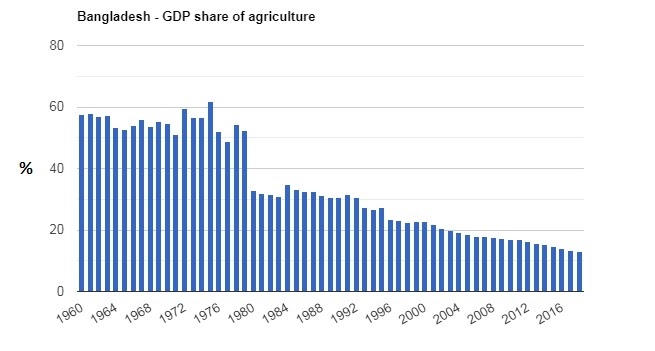 While Bangladesh continues to grow at a blistering pace in terms of economic growth, it is important to note that the contribution of agriculture to GDP has noticeably been on a downward trend, being taken up by the Manufacturing and Service Sectors. This is not to say that the Agricultural sector holds no scope for capacity building or for fostering economic growth, given the abundance of natural resources available in favor of Bangladesh.

59.6% of the total land in Bangladesh is considered arable[1] and given the country’s location as the largest delta in the world, it is in prime position to reap possible benefits. However, it is important that such positives are not squandered. According to Soil Resource Development Institute (SRDI) Annual reports, there has been a declining level of organic matter in soil, bringing the average in some regions below the accepted global standard of 3.4%, due to over-cultivation, use of fertilizers, and poor land management.

It can be argued that the adoption of technology and innovation in agriculture will lead to a  boon in terms of improving cultivation efficiency, worker productivity, and securing food security in an attempt to achieve SDG-2 (The Elimination of Hunger). However, some may also argue that eventual automation of irrigation systems such as planting and harvesting may pose a risk to uneducated labor who may be made redundant in the sector and thus lose their livelihoods. There is also the concern of how shifting away from organic farming poses risks to the environment through a loss in soil fertility over time, causing imbalances in pH levels. While this may potentially increase short term yields, it runs the risk of over-cultivation and long-term loss in productive potential.

The most common adoption of mechanization includes adoption/incorporation of farm equipment such as power tillers and tractors. The Department of Agricultural Extension (DAE), NGOs such as BRAC, and international organizations such as The World Bank, all incorporate the provision of such machinery to farms across Bangladesh as part of their mechanization programs. While it is estimated that farmers are now threshing more than 90 percent of their grain crops by machines and are tilling nearly 90 percent of cultivable land by power tillers and tractors, this is still subject to seasonal or business-cycle variations as rental prices of farming equipment tend to fluctuate.[2]

Mechanization has various benefits including an overall increase in cropping intensity, yield, decrease in wastage, and saving in production cost in comparison to traditional farming techniques. For example, the use of rice transplanters help growers save BDT 5,000 and 74 hours of labor on each acre, estimates the DAE.[3]

An issue that pervades many rural areas is the fact that farmers tend to have fluctuating seasonal incomes. During peak planting season, the high demand for machinery rentals drive up prices significantly. Despite the presence of various Microfinance Institutions (MFI),that support farmers in accessibility of farm equipment, and state-subsidised purchase options, there is no national organisation or entity that produces and sells machinery at below-market prices.

The growth in demand of farm machinery initially spiked with the introduction of High Yielding Variety crops which began in the 1960s’ Green Revolution.

Cropping Intensity refers to the percentage of cropped area to sown area, over a time period, usually a year. For example, a cropping intensity of 100% would mean that all of the sown area has been cultivated once over the year. Today, High-Yielding Varieties (HYV) are integral in securing cropping intensity, which is over 190%.[5] They also are important in maintaining the output levels of integral crops such as boro rice in the path towards sustainable self-sufficiency.

Bangladesh is also particularly vulnerable to climate change and natural disasters, which adversely affect crop security. Flood-proneness is a major factor that contributes to loss in crop production in many rural areas. Genetically Modified Organisms (GMO) offer a solution to this problem by engineering crop varieties that are resistant to weather conditions, pests, flooding and/or saline intrusion. Bangladesh’s first local GMO, Bt Brinjal, was launched in 2014 in small quantities. In 2019, an Institute of Food Policy Research (IFPRI) study showed that Bt Brinjal farmers benefitted from a 55 percent rise in revenues, increasing net profit by over BDT 30,000 per hectare.[6]

Organizations such as the Krishi Gobeshona Foundation (KGF) and Bangladesh Agricultural University (BAU) have undertaken various research projects which have achieved outcomes like the development of genotypes of spices, rice and tomato that were released by the National Seed Board.[7]

Scope for Digitization and Innovation

While mechanization has incubated substantial growth in agriculture, there is a large scope for a number of other innovations to be implemented gradually into the sector to solve some of the issues that plague farmers and stakeholders.

Technology may be able to mitigate the lack of fair prices–a prevalent problem in Bangladesh. Many farmers earn only subsistence level incomes or must draw into their savings when harvest is not satisfactory or when it is not peak season for harvest. Their earnings are often impeded by the supply chain of agricultural produce on its way to retailers because of intermediaries or middle-men. As a result, the market prices are not reflective of the return to the original producers.

The creation of a digital platform to bridge the gap between consumers and producers may be one way to minimize this problem. It will also lower asymmetric information in the market for agricultural products and improve livelihoods of farmers.

Another bottleneck in mechanization is the lack of labor training and skills necessary to properly utilize the technology and reap the benefits from them.

Syngenta Foundation has thus created the Farmers’ Hub, which is a platform designed to solve these very issues through the creation of a digital bridge between producers and sellers to prevent producers from losing out on profits through intermediaries channels. Farmers’ Hub also provides a platform for technical assistance and upskilling farm labor, and provides rental farm machinery.

The Internet of Things (IoT) Technology is a relatively new technological innovation with great potential in Agriculture. Essentially, IoT technology in agriculture would involve remote monitoring of conditions essential to farming output such as soil salinity, fertility, humidity, temperature, etc. through one device in the cropping zone, and transmission of that data to one or multiple data terminals or computers. With a simple enough interface and appropriate training, farmers will have easy access and can know when to plant, harvest, and till. Chinese company, iSoftStone has facilitated a small-scale application of this innovation in an e-village project in Gazipur.[8] Companies such as Misfit also use similar technology to monitor cattle for heat, in order to optimise dairy collection.[9]

Finally, enabling peer-to-peer lending and allowing for a digital platform to facilitate crowdfunding of farming activity can create safety nets for farmers and find more funding channels. There is scope for Block-Chain to be used in such cases to revolutionize agriculture in this way as it would equilibrate excess demand and supply from previously unconnected markets.

It is  very clear that there are manifold opportunities for further growth in the agricultural sector. The largest problem with adopting new types of machinery and/or innovation as mentioned before, is that most labor are not well-trained or educated enough to adopt these technologies in the short term. Upskilling and training  will have to be the priority alongside investment.

Organizations such as International Development Enterprises (iDE) focus on not only improving access for farmers to technology, but also in disbursing information and improving womens’ participation in agriculture. BRAC provides a range of services such as training on appropriate farming methods, upskilling in use of machinery, and conducting research to find adaptive farming methods and sustainable cropping.

Given the high level of dependence on agriculture for such a significant proportion of the population, it is imperative that we begin gradual adoption of these innovations and techniques to sustain livelihoods and foster growth. 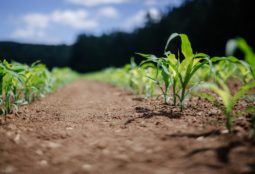 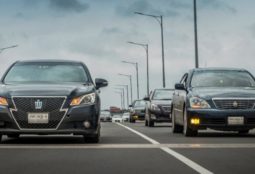 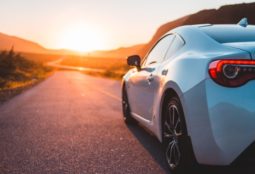 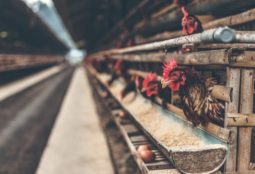