Retail Industry in Bangladesh: A Different Shape up Story

Retail environment in Bangladesh can be segregated into two streams; organized retail and unorganized retail. Although the entire industry has shaped around unorganized retail over the years, organized retail is gradually becoming popular to the new generation convenience seeking consumers. While the local mom and pop shops (In Bengali Mudir Dokan) are still larger contributors to turnover of consumer goods, super shops are slowly turning those customers into their value chain while creating new customers as well.

Bangladesh has a GDP of USD 249 Billion with a staggering growth rate of 7.3 %[1]. A constantly growing income per capita (USD $1517)[2] along with a rise of middle and affluent class (MAC) segment has been some major features on the growth trajectory.

As these indicators are improving, people are left with more disposable income, which eventually empowers them with higher purchasing power. Also the growing white collar culture with an increase of working women and the convenience seeking mindset are changing consumer preferences, purchasing habit & buying pattern. Modern consumers now want a roomful of choice in a comfortable, hygienic environment and are less prone to take the price haggling challenge which is resulting the demand for super market.

Organized Retail is yet to Accept by Mass

Compared to the total retail market, organized retail i.e. supermarket contains only over 1 %. According to Bangladesh Superstores Owners’ Association (BSOA), some 30 companies with over 160 outlets are currently operating across the country, albeit the stores are mostly located in cities and urban areas.

The first intervention of superstore was in 2001 by Rahimafrooz Superstores Limited, namely Agora with 4 outlets. In quick succession, Agora was followed by Nandan, initially with two large-scale outlets and Meena Bazar with four medium-scale outlets. In 2008, ACI Ltd. launched its own retail chain, Shwapno. Inside Dhaka there are other smaller chains such as Daily Shopping (9 outlets), Almas (4 outlets), Carrefamily (2), Pick & Pay (2 outlets), Lavender (2 outlets) and Prince Bazar (2 outlets)[3]. In addition to Dhaka, Agora, Shwapno & Meena Bazar operates in Chittagong, Khulna, Sylhet and Rajshahi.

With larger customer coverage & the most number of outlets (60 outlets), Shwapno is currently the market leader; serving approximately 35,000 customers daily on an average[4]. In numbers, Shwapno has 60, Meena Bazar has 18 & Agora has 10 outlets[5]. 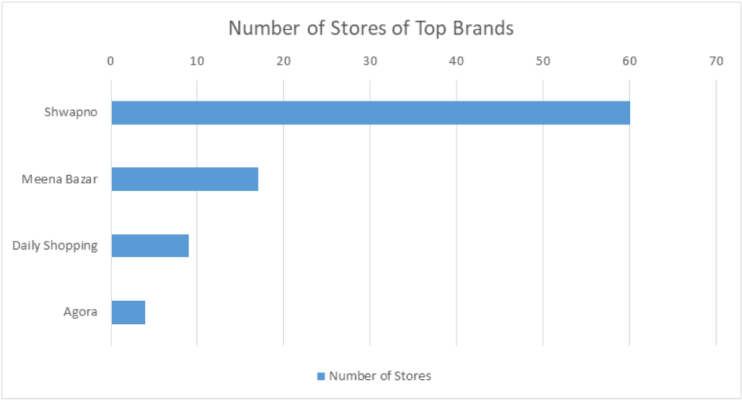 Required Transformation in the Value Chain

Direct sourcing model has potential to streamline the whole value chain however it has not been possible due to several constraints. To pinpoint the key constraints, less number of medium to large scale farmers would appear at top of the list. Because sourcing from small scale farmers is relatively expensive if the sourcer has to manage the small farmers group, negotiate with price, quality & quantity and bear the transportation cost. Besides, the biggest limitation of small farmers is that they don’t have the capital or resources to produce in scale.

Hence, in some countries this challenge has been negotiated by introducing small institutions/ farmers hub which connect farmers to supermarkets. Main purpose of these institutions is to create forward market linkage for farmers.

What is the Future of Organized Retail?

In established markets like USA, Canada, Europe where supermarket is an age old industry, new technology are relentlessly challenging the industry. This is as such that business model requires to revamp to survive the competition. Due to internet revolution over the past decade, online retail businesses have become a significant force to reckon. Retail giants like Walmart, Target have been heavily investing in click and mortar to maintain their customer pool. Of late, Walmart has bought 77% share of India’s largest online retailer FlipKart, where the transaction was $16 Billion[7]. A year earlier, in 2017, Amazon in act of expanding its business in grocery delivery, it has acquired Whole Food Market at $13.7 Billion[8]. This surely indicates how competitive the competition is going to be in years to come. While it’s not too late yet for supermarkets to adopt and embrace the change, the window of opportunity is closing down every day. Those will standout who will successfully apply multichannel strategies as the competition is not confined in grocery, clothing or consumer goods anymore.

Time for the Local Brands to Buckle Up

Retail Stores in Bangladesh is yet to get rocked by the change in global market. But they need to realize that online is the ultimate battleground for the future and this is where the entire industry is heading towards. Meena Bazar, one of the top players in Bangladesh, has recently remarked its online footprint through its e-commerce platform called Meena Click. Also Shwapno, the supermarket brand, has just introduced its beta version of online shopping. And there is Chaldal.com, a click and mortar grocery and food products provider which has been operating for quite some time. Most recently a local startup named Pathao, has started experimenting around grocery delivery with their service called Pathao Tong. The latest edition in the picture is Deligram, an omni-channel ecommerce platform which is integrating the mom and pop shops (mudir dokan) in its value chain, with an aim to connect online customers and offline stores in customers’ close proximity. The change is happening in organized retail industry of Bangladesh. However, the industry players should buckle up to match up the pace with the global market, not just in taking new initiatives but also improving the value chain infrastructure. As the middle and affluent class (MAC) population is growing, the demand for quality products, better services and convenient shopping will continue climbing up. This will attract international retail chains to enter and invest in Bangladesh and as we speak, there is a chance that Amazon will start its operation sometimes in next year. It will be very interesting to see then how the existing players react as the world’s 3rd largest company enter in Bangladesh.

This article was written by Abrar Ahmed Abir, a Business Consultant at LightCastle Partners. For any queries, he can be reached at [email protected].