Transformation in the Telecommunications Industry

The Fourth Industrial Revolution has been making its presence known throughout the world as people are more connected than ever before – to each other, devices, and networks. At the forefront of this era has been the telecommunications industry by providing increasingly cheap and accessible connectivity. In Bangladesh, the story is no different, with the industry earning $4.5 billion revenue in 2017 and contributing $12.7 billion to the GDP, including its indirect impact on productivity [1]. Noticing its strategic importance, the Bangladesh government has implemented several policies affecting industry competitiveness and the operations of firms. On top of this, changes such as the Airtel-Robi merger are ushering the industry into a period of transformation.

The global telecommunications market was valued at $18 billion in 2017 and is expected to grow at a CAGR of 6.1% for the next decade [2]. The constant development of new technologies, such as 5G and fiber optics, will continue to expand the boundaries of this industry.

Increasingly advanced smartphones and internet-dependent consumers are demanding high-speed service and the incorporation of new technologies into the telecommunications industry. This includes 5G wireless technology, augmented and virtual reality and Internet of Things (IoT), which refers to the network of objects and devices with Internet connectivity that do not require human interaction. These technologies will increase connectivity and integrate everyday objects into the online world, increasing the scope of the telecommunications market beyond voice calls.

Bangladesh is the 9th largest mobile market in the world in terms of unique subscribers, which accounts for 51% of the country’s population [1]. Many global players have invested in Bangladesh and the only locally-owned brand is the state-owned Teletalk.

The two key service offerings of the industry are voice call services and mobile internet. The former dominates the revenue of companies as only 1 in 5 Bangladeshis subscribes to mobile internet services [1]. The number of unique subscribers is growing at a CAGR of 3%, but mobile internet subscribers are growing at 10%, indicating a large potential in the latter for growth [1]. The increased availability of low-cost smartphones and growing youth populations are the major drivers pushing the industry forward. The development of internet-dependent services, such as e-commerce, e-agriculture, and e-education, ridesharing, and other on-demand services are also contributing to the necessity of growth in the industry.

The 2016 merger of Robi and Airtel made it the second largest carrier in the market [4]. Both brands are operating but under the Axiata Group Berhad. A possible upcoming merger is that of Telenor’s Asian operations and Axiata, which would include Grameenphone and edotco Bangladesh Tower Company Limited, Axiata’s mobile tower company [6]. This is due to be a non-cash merger of infrastructure and assets, where Telenor would be the majority shareholder. Robi will continue to be managed separately by Axiata, meaning the telecommunications industry will not be impacted directly, but rather indirectly through the tower sharing market. The merged company would be called MergeCo.

The government’s Digital Bangladesh initiative, under Vision 2021, has necessitated action to promote the growth of the industry while regulating the activities of the companies. Major policies include the Significant Market Power (SMP) Regulation, separation of the tower industry, and Mobile Number Portability (MNP) services.

To prevent the creation of a monopoly, the SMP Regulation was formed in late 2018, stating certain rules for companies with a market share above 40%. These rules prevent such companies from doing any activities that harm the competitiveness of the market, such as collusion or unfair prices. The only company eligible for this regulation as of 2019 is Grameenphone, which has been restricted with a number of rules. At first, the BRTC enforced a ban on exclusive goods or product deals, call drop rates higher than 2%, and nation-wide advertisement campaigns, but this was withdrawn a month later [5].

The tower industry previously was a part of telecommunications, with carriers building and using their own towers. However, the government announced that it would be separating the mobile service providers and tower sharing companies by providing licenses to organizations authorized to operate towers. Four such companies were awarded licenses in 2018, and they will take over the existing towers of carriers [7]. Carriers will be banned from building new towers and will have to rent towers for a specific amount of time. The goal of this regulation is to encourage operators to invest in technology other than simply building additional towers, and improve network quality and range.

The MNP service will allow mobile users to switch carriers without changing their phone numbers, increasing convenience and the competitiveness of the industry as consumers will be able to switch to better service or prices without logistical difficulties [4].

These policy changes are intended to guide the growth of the industry in a sustainable manner. The prevention of monopoly powers and increasing access to future technologies protects consumer interest but comes largely at the cost of the operators, who not only have to deal with new regulations, but also bureaucracy, political influence, and the cost of developing and implementing new strategies.

Carriers have been shifting focus from voice call services to mobile data. Only 54.5% of mobile users use internet services on their phones as of 2017 [4]. This is due to the fact that smartphones are only recently becoming affordable for the mass public, and many users in Bangladesh subscribe to multiple carriers but use mobile data on one phone. MNP may change this as users will be able to keep one number and have flexibility in choosing their carrier, increasing the scope of internet penetration. On top of that, 74.2% of mobile data users use 3G internet, and only 13.7% use the newer 4G, with the remaining 12.1% still on 2G services [4].

Upgrading these customers to the faster generations has the potential to generate greater revenue, especially as 5G is on the horizon of being introduced to Bangladesh by 2021 [8]. Currently, Bangladesh has one of the lowest Average Revenues Per User (ARPU) in the world, at $2.90 compared to the global average of $14.60 1. However, the industry experts are apprehensive about the cost-effectiveness of this plan given the increasingly strict government policies. Certain policies have been termed unnecessarily restricting, such as high internet spectrum prices and a ban on operators laying fiber optic cable on their own 8.

There is a major opportunity to develop content streaming platforms, as content is the next logical step to drive up internet revenue in the face of declining call revenues. Services such as Whatsapp, Skype, and Messenger provide local and international voice call services. Adding content, such as movies, music, and games, is necessary to keep customers constantly engaged with the internet. Some operators have set up content streaming services, such as Grameenphone’s Bioscope and Banglalink’s Game On’ of Banglalink. This may extend to e-commerce sites in the future.

The transition to a separate tower industry has not been smooth. Three of the four licensed companies have not been able to start operations, meaning no towers have been built since the decision in late 2018 even as demand grows steeply [7]. There is also disagreement between the carriers and tower companies regarding terms. A lease of 15 years has been proposed, but carriers are doubtful of the success of the new system and hesitant to sign a contract for such a long period. On top of that, tower companies are refusing to ensure regular maintenance and prompt disturbance handling. If this situation is not handled in the near future, the infrastructure may not be able to support the high mobile service usage of the country. 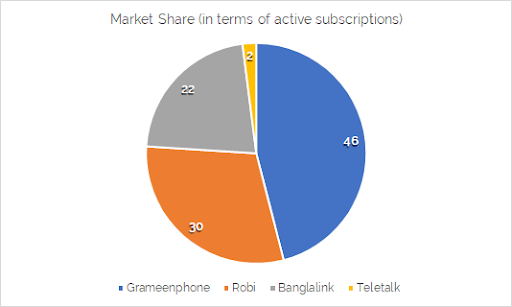 There are currently four players in the market: Grameenphone, Banglalink, Teletalk, and Robi (under which Airtel operates). The market had six players in 2016 before the Robi-Airtel merger and Citycell’s bankruptcy. Competition is intense due to the oligopolistic structure of the industry.

Everyday life is becoming increasingly dependent on the services of the telecommunications industry. New government policies may mean the industry will thrive at the expense of the profitability of individual companies. As most of these are owned by large global players, the rising difficulty of operating in the Bangladeshi market may discourage additional investment, despite the opportunities the market has to offer. On the other hand, the government initiative to protect customers, such as by improving complaint lodging systems, will prevent these large companies from exploiting customers. Transformation will come not only by the introduction of new technologies but also by constantly developing government regulation. The very definition of the industry will be affected by changes like the separation of the tower development industry and the introduction of 5G technology.

By overcoming these growing barriers, as well as those posed by accessibility and infrastructure, the telecommunications industry may be able to carry Bangladesh into the era of the Fourth Industrial Revolution by providing cheap, reliable connectivity to the mass population.