Food is a source of joy for people around the world, but those limited by their resources have to resort to basic staples. This is especially true in developing countries like Bangladesh, where rice and potatoes act as staples. However, these do not satisfy protein requirements which are essential for nutrition and health. The availability of cheap and accessible protein through the poultry sector, as a result, has been a considerable development.

Chicken and egg are the cheapest sources of protein available in developing countries, compared to the more expensive sources like beef and fish. In Bangladesh, too, poultry is the most consumed protein. The investment in the sector is approximately $4.16 billion which is expected to double in the next decade, and the number of poultry farms increases at an average of 15% annually.[1] The poultry sector contributes around 1.5% to the GDP of nearly $250 billion, making it the second-largest sector after ready-made garments.[2]

Poultry dominates local consumption due to higher availability and affordability, and this consumption has been increasing due to rising incomes. The rise of popularity of processed and frozen food in both homes and the growing restaurant industry has also increased the demand for poultry meat, especially in expanding urban areas. This has boosted production, especially as poultry rearing is profitable. However, consumer perception is still plagued by certain misconceptions regarding safety. 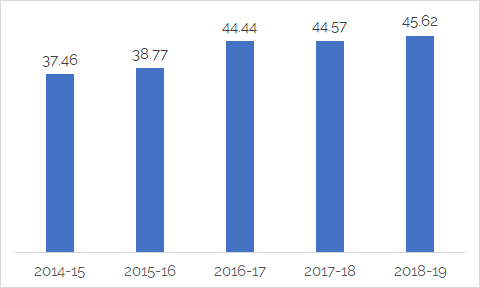 The industry has a highly structured value chain, with Bangladesh increasingly focusing on the sourcing of high-quality chickens through the import of purebred fowl. This has led to the development of high-yield varieties such as the Sonali chicken, which is a cross-breed of an American male and Egyptian female breed.

The size of the poultry industry can be seen through the rise in farming and the population of poultry being reared. 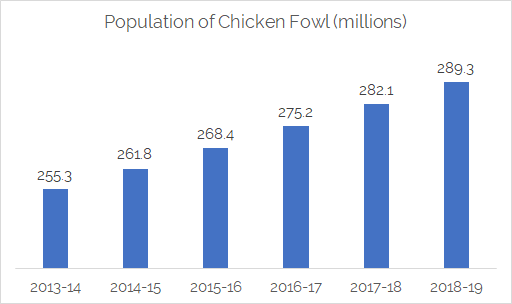 There are several types of chickens sold in the Bangladeshi market, including Deshi, broiler chicken, and the newer variety of Sonali chicken. While broiler chicken is cheaper, most easily available, and thus most consumed, Deshi chicken is the one that consumers perceive to be healthiest and of the best quality, causing it to be the most expensive.

Sonali chicken is a new breed and a rapidly growing segment of the market. It was created in Bangladesh using cross-breeding of a Rhode Island Red male and Fayoumi hen, and has resulted in the Sonali fowl which has proven to be the most profitable and highest-yielding in Bangladeshi conditions.[7]

Health concerns have caused people to purchase Sonali chicken over broiler. In 2018, the percentage of Sonali chicken consumption was around 20%, but this rose to 45% in just a year.[8]

The poultry supply chain is intricate and detailed, with several stages of breeding and rearing. It starts with the grandparent stock, also known as the GPS. These are purebred, highly valuable eggs with a controlled pedigree. The farms are highly secured. There are only 8 players in this market who own GPS, who operate a total of 15 farms.[4]

The next stage is parent stock, who produce fertilized eggs which are sold to farms and poultry businesses. Hatcheries buy these fertilized eggs to produce day-old chicks or DOC. Approximately 525 million broiler DOC and 60 million layer DOC are produced annually. These are then sold to commercial producers, who supply directly to the market. There is a lack of slaughterhouses in the Bangladeshi poultry market, which is largely due to the fact that chickens are sold live.

Production is concentrated around Dhaka and the North-Western districts, and this centralization is higher due to limited temperature-controlled facilities outside these areas. Bio-security is a key issue in the industry for the protection of fowl and prevention of diseases, for which the government is reportedly aiming to develop poultry industrial zones.[6]

Contract farming refers to independent farmers who maintain their own poultry farms but supply to processing companies, such as CP and Kazi Farms. These large companies lend the initial finance and provide resources like the feed and technical guidance regarding operations. However, as their operations, supply, and sales are completely under the control of the contractor, this makes the industry difficult to survive in. Cost efficiency is of highest priority, as they must remain competitive to receive contracts, but this is difficult as the price of inputs like feed rises and DOC fluctuates.

Large poultry market players in Bangladesh include CP, Kazi Farms, Aftab Bohumukhi Farms, and Paragon. While the emergence of these companies allows a wider range of processed products, and large-scale production, it has led to the shutdown of small-scale independent farmers.

Rising Consumption is Troubled by Issues of Perception

Protein consumption in Bangladesh has been on the rise, largely due to rising incomes and access to food. The falling prices of eggs have benefitted lower-income consumers in gaining access to cheap protein sources. Additional drivers of the growth in the consumption of poultry meat and products have been rising health concern of the educated population, leading to less consumption of red meat like beef, as well as the higher costs of fish. Compared to its alternatives, chicken and egg are not only cheap but considered healthier with lower fat and cholesterol content.

According to the UN, an average human being must consume 104 eggs annually to remain healthy. Bangladesh got closest to achieving this target in 2018, with a per capita annual consumption of 103 eggs. This is expected to reach 105 eggs in 2019, putting it ahead of other subcontinental countries.[3] 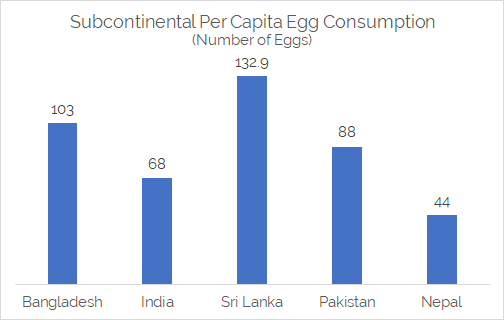 However, this growth in consumption is affected by certain misconceptions Bangladeshi consumers have about poultry, particularly about the safety of broiler chicken and eggs. They believe that the use of antibiotics or chemicals in feed cause these sources of protein to be contaminated and harmful for the human body. These vaccines are necessary to protect the fowl from illness, without which they would die before reaching adulthood.

Moreover, as most broiler hens are raised in captivity on small farms, they do not get much movement and thus do not have tough, gamey meat like Deshi chicken, which is also called the country chicken as they forage in open spaces. These concerns are causing shifts in consumption patterns.

The Bangladeshi Food Safety Authority is tasked with preventing adulteration, but there are still concerns about their capability. To increase food safety in the country, the BFSA is developing new laboratories and awareness campaigns.[9]

Broiler and egg prices are falling as production rise. However, there is a demand-supply mismatch of DOC in the industry. This mismatch often causes fluctuations in price, which farmers have to bear the cost of as they cannot pass on the higher prices to consumers. As a result, profit margins fall and can also become negative.

Often, supply falters due to the impact of diseases. Recently, 13 outbreak of the H5N1 virus of avian flu were detected and analyzed for vaccine development.[5] The threat of diseases like bird flu is highest for GPS, which are the most valuable fowl for the industry. However, even if the outbreaks are contained, news regarding bird flu tends to cause panic among consumers which causes demand to fall.

In terms of backward linkage, the market still needs to develop. The main input of the poultry sector is feed, which includes raw materials such as corn, soybean, rice bran, and various minerals and medicines. This is largely imported from India, China, and South America, as local production is insufficient and also falls with seasonality. However, global price fluctuations mean that local players often have to suffer as this is an essential input.

The Bangladesh government has recently imposed a 5% Advance Tax on imports to encourage sourcing from the two larger local producers. However, as these producers do not have the capacity to supply to the industry, this is likely to only drive up costs. Nearly 96% of demand is satisfied by the domestic feed industry, 2% is imported, and 2% is of homemade mix.[1]

The new variant, Sonali chicken, has the potential to change the industry. This development shows the advancement of the poultry sector in Bangladesh as new, better breeds are being developed, and the industry is focusing on importing GPS for higher yield and control of production.

Similar to most industries, access to affordable finance is the main struggle for small-scale farmers, especially when they are faced by threats such as bird flu. Low-interest loans and tax incentives will be beneficial in dealing with those losses. To strengthen the safety and consumption aspect, the government should ensure vaccine coverage for all farmers from local sources, and provide bio-security and safe production training. As the perception of poultry is affected by opinions and perception, it is important for there to be credible authority ensuring the health and safety of the food products created by the industry.

It is greatly in the interest of the government to promote the poultry sector. It provides cheap and essential nutrition for its population and leads to the employment of many farmers both directly in poultry and indirectly in the feed industry.

Bangladesh’s poultry sector has been predicted to be able to export to the Middle Eastern ‘halal meat’ markets by the year 2024.[1] However, the conversion of an industry that has only recently started reaching levels of self-sufficiency, into one that can sustain exports will require significant policy support.