There is no bad time for a cup of tea. It’s the go-to drink whether the occasion be a headache, bad mood, or unexpected guests. Tea’s importance is embedded in our culture. Bangladesh has been producing tea since the 1840s, and produced nearly 80 million kilograms in 2017 [1], with an industry turnover of approximately $2.5 billion [2]. In the 1990s, Bangladesh was the 5th largest exporter of tea, but a major boost in demand eliminated the surplus [3]. 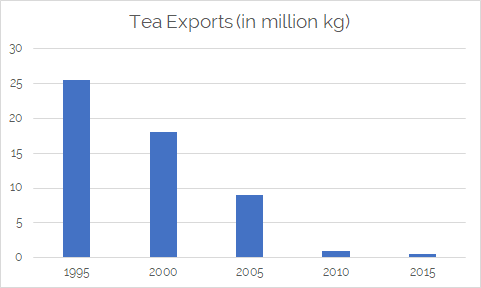 Only recently has the industry been able to match domestic demand with record-high productions in the past 3 years. By adopting new agricultural practices and expanding the range of tea products produced, Bangladesh is set to meet local demand fully and make tea an export earner once again.

The global market for tea is growing both in production and demand, with a size of $30 billion in 2017, forecasted to reach $44.3 billion by 2021 [4]. Demand is falling in the mature markets of the UK and Russia due to a fall in the popularity of the ordinary cup of black tea while the demand for novelty teas rises throughout the world.

In regions where tea drinking is not tradition, non-conventional products such as infused teas and tea soda are being developed and sold. Rising awareness of the health benefits of tea is another driver for demand. Premium teas with hand-picked, artisanal, and organic labels have made tea popular among younger generations who seek to maintain a healthier lifestyle. This is shown as 42% of 18 to 29-year-old Americans choose tea over coffee, compared to 35% of 30 to 44-year-olds [8].

Tea in Bangladesh is imported mainly from India, Vietnam, and Kenya. These countries have a cost advantage due to ample land for tea growth.

Being an agricultural product, tea production is highly impacted by weather and damaged by dry conditions or warm weather. Thus, the three crucial aspects of growing tea are soil quality, climate, and availability of labor. Most areas suitable for cultivation are concentrated in the hilly regions of Sylhet and Chittagong, where heavy rainfall and fertile land make tea growing suitable. Different types of tea have different harvest periods, called flushes. At the moment there is a total of 164 tea states, spanning over 60,000 hectares of land [6]. It is estimated that over 7 lakh workers work in and live near tea plantations, most of whom have been picking tea leaves for generations since British rule [5]. Tea is distributed from the plantations to name brands through auctions, where registered buyers bid for various grades and types of tea grown throughout the country. Vertically integrated companies that have their own tea estates may also sell surplus production at tea auctions to other brands, providing a secondary flow of revenue. 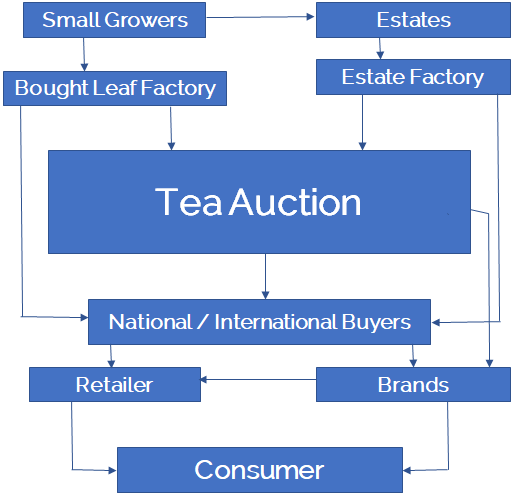 The consumption of tea in Bangladesh has increased at a CAGR of 7.1% since 2009 [2]. Demand for tea, already ingrained in Bangladeshi culture, has been further boosted by the rising incomes. Per capita consumption has increased from 100 grams to 500 grams, as people can afford to drink multiple cups a day [1]. Unfortunately, the steady increase in demand is not easily matched by production, which fluctuates annually. Trends indicate that production is matching consumption more consistently, creating the opportunity for exports. A major challenge will be to match the low prices of imported teas, which can only be achieved by increasing production to gain economies of scale. 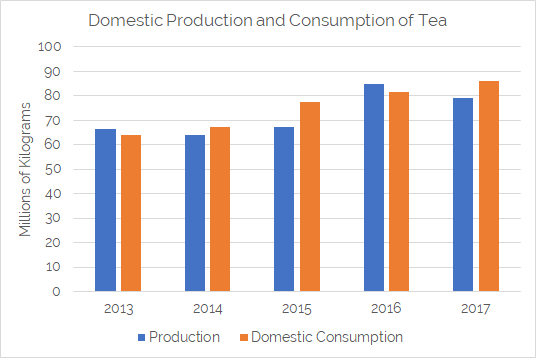 Lifestyle changes have also demanded the industry to adjust, with the easier and more portable teabags becoming popular for those with little time to brew a cup of tea on the stove. Tea is a healthy alternative to drinks like coffee and carbonated beverages and the wide variety of options such as green and Oolong tea make it an attractive choice to the other not-so-healthy choices. This trend is gaining traction globally, providing export opportunities with appropriate branding.

Global warming is one of the biggest threats to the tea industry. Pollution and extreme temperatures affect the yield and quality of the tea, and the issue seems to be swept under the rug by industry stakeholders as the growing threat is yet to be addressed. One of the biggest impacts this will have on tea is the fall in the longevity of the plant’s life, which will decrease yield and increase production costs [4]. Only plantations of high altitudes have been relatively unaffected by climate change.

Poor labor conditions are another threat affecting the industry’s sustainability and image. Workers struggle with low wages, discrimination, and unfair land rights. Their conditions have been compared to modern-day slavery by humans rights organizations [5]. As consumers become more aware of their purchase decisions, it is important for companies to ethically source their tea by providing fair working and living conditions for these workers.

There are several local brands operating in the Bangladeshi tea market. The market leader Ispahani Mirzapore Tea dominates the industry with approximately 50% market share [7]. It is owned by the Ispahani family and has been operating for nearly a century. The market challenger is Unilever’s Brooke Bond Taaza, aided by its strong global supply chain. Kazi & Kazi Tea is the only internationally certified organic tea producer of the country and sells its products abroad under the brand Teatulia, known for transforming the region of Panchagarh. Competition is focused on increasing distribution and opening new plantations to access a larger local market.

Innovation in the Industry

Supply-side drivers are mainly good weather and investment in new plantations, supported by the government. The land used for tea production is traditionally hilly, but recent usage of flat land through extensive fertilization in Panchagarh, transforming the area from barren flatlands to fertile tea gardens using only organic fertilizers and pesticides, may introduce new practices of tea growing. The replacement of old tea plants with new modified strains has also improved productivity.

Premium tea, grown in organic conditions and marketed as gifts, is an opportunity that Bangladeshi brands could capitalize on by producing more expensive variants of tea, or producing flavor-infused tea, instead of the traditional black tea. This would increase the scope for exports as this product is demanded in Western markets. The production of tea-infused skincare products from the by-products of tea leaf could be an opportunity for local brands as well, which would also appeal to Western markets by virtue of being natural. Kazi & Kazi Tea has been the first mover in this market with innovative and unique packaging, as well as products such as tea soda and iced tea.

Domestic consumption of tea has been increasing with GDP growth as people can afford to not only drink more but also choose more expensive varieties and brands. Although production has both been increasing, there is still excess demand in the market that is being satisfied by imported teas from India.

The priority for both growers and the government should be to boost production to consistently meet local production before moving to exports. The example of Panchagarh as a case study has great potential as it could be used in various locations throughout the country to increase land available for tea growth. The BRTI is currently conducting research on higher quality strains of the tea plant, which may boost productivity. Imports can be discouraged by higher import duties. By successfully competing with cheap imports, the industry can shift focus to exports for revenue generation.

The potential for foreign investment in this industry, such as from Chinese tea planting companies, can be useful if they brand Bangladeshi tea as exclusive and of premium quality. Tea’s importance in our culture will allow the development of a strong and convincing brand image if capitalized by companies by integration into gifts, souvenirs, and novelty flavors. All these factors indicate a high potential for growth in the future if market players capitalize on them, enhancing the country’s ability to meet growing domestic demand and increase the potential for exports in the future.