The Passenger Airline Industry Failing to Take Off

Few inventions have changed the world as drastically as the invention of the airplane in 1903. It impacted trade, lifestyles, and communication by making the world a smaller place and providing a faster mode of travel and shipping. In Bangladesh, the industry is booming, having grown 22.1% internationally and 64.7% domestically in the last five years, in terms of passengers carried. Over 7 million passengers were carried in 2017 alone [1]. The current market size is estimated to be over $550 million [8]. However, companies have been unable to take advantage of the growing demand due to lack of investment, infrastructural problems, and inability to respond to the market trends.

The industry is heavily impacted by fuel price changes, which fluctuate as shown in the graph below. Despite this, global profits were high with a 7.5% profit margin [2]. 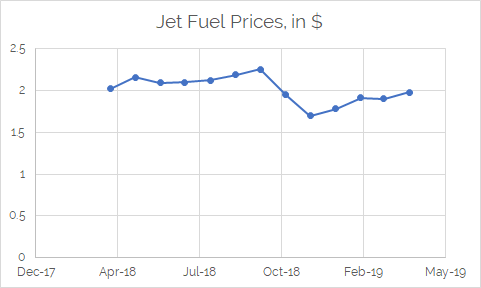 Consumers of passenger airlines can be classified into two main categories: those who travel for work (business travelers), and those who travel for leisure (tourists). Business travelers tend to travel several times a year and are not affected by prices as they tend to be paid for by the company they represent. As a result, they are attracted to special services, luxury packages, and upgrades.

In terms of international flights, two segments that generate high demand for air travel in Bangladesh are migrant workers and those traveling for the Hajj pilgrimage. Over 400,000 people leave the country annually for employment, and 100,000 for the Hajj [3]. Even more travel to visit family after employment and the Umrah pilgrimage. Given that the Middle East is the major employer of Bangladeshi migrant workers, both of these segments make it the key destination for airlines operating in the country. 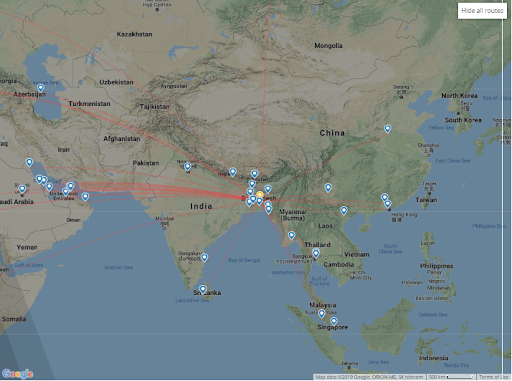 A major cost for airlines companies is that of jet fuel, as mentioned previously. However, Bangladeshi companies face a supplier monopoly held by the Padma Oil Company. Fuel accounts for 50% of the operating costs, and even a slight increase in costs can greatly impact profits [6[. On top of this, ground handling and maintenance costs are higher in Bangladesh than in other countries, further adding to the challenges of the industry.

As travel is considered a luxury activity, the biggest factors affecting tourists are price and income. The price level of air travel in Bangladesh has fallen due to the increasing competition, and support from industries such as tourism and hospitality. Income levels also have a crucial impact on the industry, as people tend to spend more on tourism as their disposable incomes rise. This has been particularly true for domestic travellers, who have opted for air travel over cheaper alternatives of trains and buses. 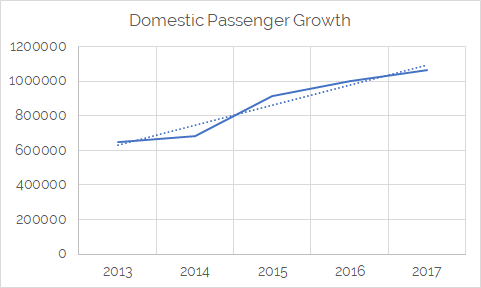 Another driver is the growing popularity of tourism. As local and foreign destinations are heavily promoted through various channels, and social media allows people to share their travel experiences, consumers become more open-minded about traveling for leisure. Increasing numbers of travel agencies also make it more accessible for consumers to book flights.

Capitalization is a crucial feature of this market. Not only are the planes themselves expensive to buy or lease, but they are also expensive to maintain with sophisticated equipment and security checks. The type of aircraft to be purchased depends on more than the cost, however: the expected load factor, airport capacity, and required skill of the workforce are all points of consideration. Current market demand is expected to require 50 aircraft, but the market is operating with under 40. This demand is forecasted to rise to 150 aircraft by 2037 [7].

Weather is a uncontrollable variable that airlines are forced to tackle. Delayed and canceled flights increase costs and customer dissatisfaction. These factors combined with the price cuts to attract consumers and handle competition have affected the profitability of the industry. Thus, despite a high load factor of 80%, the companies have been struggling with profits [4], a stark difference from the global situation of record-high profits.

Infrastructure is another potential challenge as firms have to focus operations on the Dhaka Shah Jalal International Airport. The Chittagong Shah Amanat Airport is yet unable to truly support the demand for the industry, limiting the growth rate. The country has the potential to be a connector for the far-east to the west, acting as a hub for flights along this route, but has failed to take this opportunity. If the number of airports does not increase, the capacity for the industry gets stuck with an upper limit.

A major disadvantage of operating in this industry is the public perception of the safety of air travel that is deeply impacted by incidents such as the US-Bangla crash in Nepal, which killed 51 people, in 2018. Even minor incidents such as delays or technical issues can create a panic in passengers, ultimately affecting the reputation of not only the airline but the industry as a whole.

Potential threats to the market may be coming in the shape of transport-related megaprojects the Bangladesh government has undertaken. The development of bridges, highways, and tunnels may make road transport more attractive than air travel, as it already has the advantage of being cheaper.

As of 2019, there are four scheduled passenger airlines operating in Bangladesh as licensed by the Civil Aviation Authority of Bangladesh: Biman Bangladesh Airlines, NovoAir, Regent Airways, and US-Bangla Airlines. Other than these, over 30 foreign airlines provide services in Bangladesh. International carriers such as Emirates and Singapore Airlines offer flights to and from Dhaka, attempting to capitalize on growing market demand.

Biman Bangladesh has operated since 1972 and is the national flag-carrier. It operates both domestically and internationally. It has the largest fleet, of 13 planes, and is focused on international service provision. It was previously a state-owned enterprise but is now a public limited company as of 2007.

Competitiveness in the industry can be observed using Porter’s Five Forces: 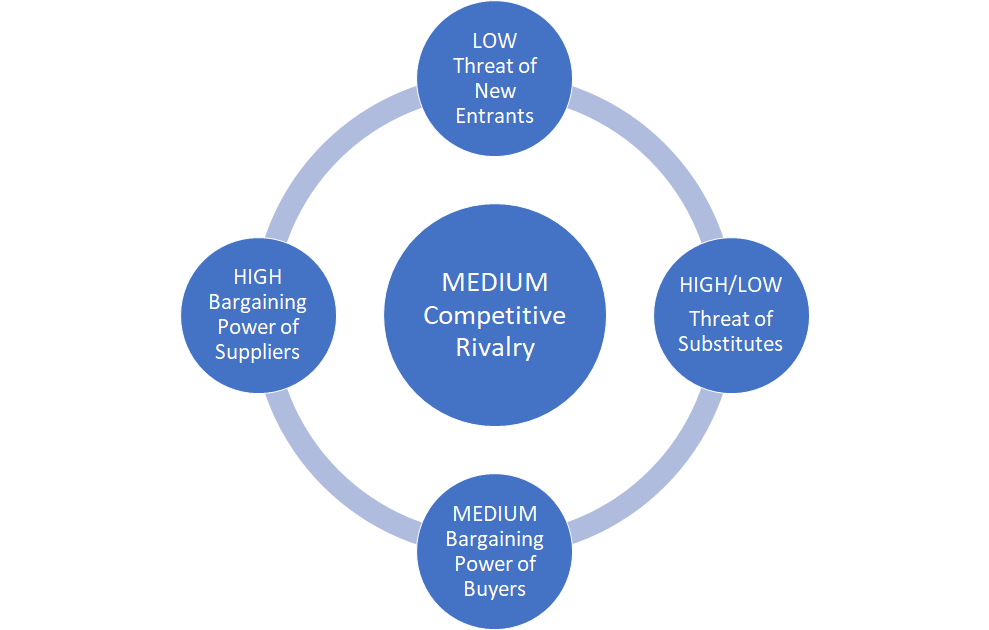 Although the industry has been enjoying high and growing demand, a number of supply-side factors prevent it from reaching its potential. Airlines must place pressure on the government to disband the jet fuel monopoly, as it is preventing them from earning sufficient profits to expand to the recommended fleet size.

Moreover, the government must invest in its airports to facilitate not only Bangladesh’s own industry but also the business generated by international flights, who bring international tourists. These tourists proceed to spend money on various sectors, such as hospitality and food, and the government should maximize their convenience and comfort in visiting the country.

Compared to nearby countries, Bangladesh has not placed much importance on its airline industry. This has limited its growth and potential. The airlines industry is unique in that it has the ability to impact all aspects of the economy, by bringing remote regions “closer” and opening up possibilities of faster and larger-scale trade. To maximize these benefits, attention must be brought to the limiting factors.