The Pharmaceutical Industry: The Next Stage of Development

The pharmaceuticals industry of Bangladesh is one of the most important thrust sectors of Bangladesh, expected to bring billions of dollars worth investments and exports as the country grows. As the country shifts to high-value manufactured products from low-value products like RMG, the future of this industry is under intense scrutiny. This expectation is supported by the industry’s 15% CAGR from 2012 to 2017 and an industry size exceeding $2 billion as of 2017 [1]. Bangladesh is able to meet 98% of local demand domestically and is almost effectively self sufficient in this respect.[2] It is the only Least Developed Country (LDC) in the world to have such a strong pharmaceuticals industry.[2]

Support from the Global Market

The global generic medicine market is valued at just around $900 billion and is projected to grow to $1.20 trillion by 2024, growing at around 6.4% annually.[3] Changes on the demand side include changing disease patterns, caused by rising pollution levels and a more sedentary lifestyle, rising healthcare awareness and education, and a changing perception of drugs that may include distrust On the supply side, limited research and development by companies may slow growth, as it is a costly and risky investment that is highly regulated. Drug prices are falling as patents expire and the market becomes more competitive. This is further pushed as governments are pursuing cheaper treatments, leading to the support of drug production in developing economies.

This is where Bangladesh comes in. One of the most crucial events for the industry was the implementation of the Trade-Related Aspects of Intellectual Property Rights (TRIPS) Agreement, by the World Trade Organisation. It exempted Bangladesh and other Least Developed Countries (LDCs) from patent protection until 2033, extended from 2016. This means that Bangladesh is allowed to produce any patented medicine without taking prior permission from the innovator.[6]

The pharmaceutical industry is strategic for exports, as it exported products worth $103 million in 2017 to over 100 countries. Although this constitutes less than 5% of the market size, the government has set the target of making it the second largest export contributor after RMG.[1] The main destination for these is other developing countries, like Myanmar, Sri Lanka, and the Philippines, as Bangladesh has higher capacity and production quality than these countries. The CAGR for exports from 2011 to 2016 was 13%. The government has targeted the pharmaceutical industry to be the second-highest export revenue generator after the RMG sector.[1] Obtaining permission from foreign regulatory bodies, such as the US Food and Drug Administration, provides a boost to both local and international credibility of Bangladeshi brands.

The industry is highly dependent on active pharmaceutical ingredients (API) and excipient imports. Over 90% of the demanded raw materials are imported from countries like China, India, and Korea. However, other raw materials and labor are 3 or 4 times cheaper than those in China and India.[1]

Although the TRIPS Act allows Bangladesh to produce patented drugs without acquiring a license, those drugs cannot be exported to countries where the patent exists. As a result, most exporters focus on unregulated or moderately regulated markets. Only 20% of the drugs produced in Bangladesh are patented, and the others are generic.[1]

The boom in the growth of the industry is largely attributable to the 1982 Drug Control Ordinance, which banned the import of drugs that are produced locally. The two percent of drugs that are still imported are highly specialized and advanced drugs. Drugs for alimentary and metabolism treatments dominate the market with a share of 36%, followed by anti-infectives, which treat viral and bacterial infections, with a share of 16%.[1]

A Market with High Potential

Healthcare is considered a basic necessity, providing the pharmaceutical industry with a stable demand base. However, demand has still been increasing. The graph below shows how healthcare expenditure in Bangladesh has been rising consistently in the past five years. This rising demand is attributable to three market drivers: changing disease patterns, improved accessibility and distribution, and rising incomes. 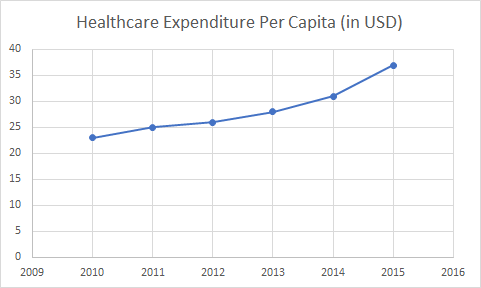 Diseases patterns are changing from acute to chronic diseases and communicable to non-communicable diseases. As pollution rises, related respiratory diseases and infections are also on the rise. Higher numbers of hospitals, pharmacies, and medical facilities are giving people better access to healthcare and drugs, especially in rural areas. This is boosted by rising income, which allows people to spend on drugs that treat non-life-threatening diseases.

The government is trying to reduce dependence on the import of raw materials. Recently, the National Revenue Board issued a tax exemption allowing the import of raw materials for the production of Active Pharmaceutical Ingredients (API) without Value Added Tax (VAT).[4] To further support the development of this backward linkage, the government approved plans to build an API Park in Munshiganj. It is expected to be completed by 2020.

The first and most pressing challenge to ensure sustainability is the lack of backward linkage. Dependence on raw material growth is a barrier to growth as it is costly and places an upper limit on production.

Secondly, although the TRIPS Act expires in 2033, Bangladesh is expected to exit the LDC category by the year 2024. An abrupt introduction of a patent regime can severely damage the industry. Moreover, as the global market is highly regulated, Bangladeshi companies will have to meet higher standards, invest in research and development, or pay expensive patent license fees.

A major upcoming opportunity is that of expiring patents. Drugs worth $251 billion are coming off patent in 2022, which will allow Bangladesh to produce them even after it is ineligible for TRIPS.

Currently, there are 257 registered companies, of which around 150 are functional.[2] Square Pharmaceutical is the dominant player in the market, leading by a high margin of 7% to the market challenger, Incepta Pharma. Square produces some of the APIs it uses, improving its competitive advantage.  The company is also in the process of building a factory in Nairobi, Kenya.

The top 10 companies are all Bangladeshi and dominate the market with 68% of the share. Multinational companies include Sanofi Bangladesh and Novo Nordisk, but neither has more than 2% market share. Only one company, Active Fine Limited, produces only API and no finished products. 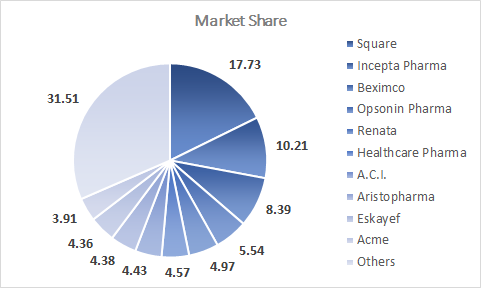 The level of competitiveness of the industry is observed through Porter’s Five Forces analysis in the following diagram. According to industry experts, the market size of pharmaceuticals is set to reach around $4 billion by 2020.[1] To sustain this growth, the issues of backward linkage and TRIPS expiration must be addressed. The market for locally produced APIs must be cultivated. The API VAT exemption and construction of the API Park are steps in the right direction, and may also translate to exports of APIs once local demand is satisfied.

The government could attempt negotiations with the WTO and ask for an extension to allow a gradual transition to a patent regime, but this will likely be challenged by large international pharmaceutical companies. Another option is to encourage research and development of new drugs, allowing local companies to have patented drugs of their own. This, however, is a long-term process and difficult to incentivize.

The industry has the potential and is well on the path to overtake RMG as Bangladesh’s most significant thrust industry. A shift to a high-value manufacturing industry which is research and technology-intensive is critical to carry Bangladesh to its next development target and take the pharmaceuticals industry to the next stage of development.